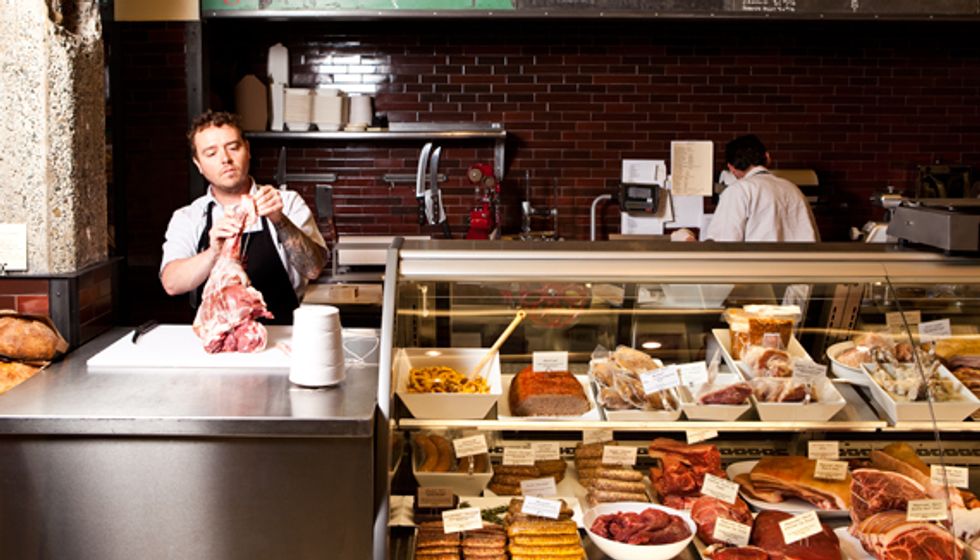 A continuing proliferation of butcher shops are providing options far beyond the loin.

In a world dominated by boned, skinned, and plastic-wrapped chicken breasts, the two-month-old Fatted Calf butcher shop in Hayes Valley is just one of the city's new breed of butchers presenting meaty alternatives. Yes, there’s ground beef, but the long glass butcher case features more unusual cuts—from pig trotters bristling with black hairs to vitellone top round and lengths of grass-fed short ribs. “Pasture-raised” and “local” labels are attached to nearly every piece of meat in the case. Owner Taylor Boetticher has a relationship with every farm he buys from. Need leaf lard? Beef tongue? Rabbit with kidneys and liver intact? Your wish is his command.

Boetticher and his wife, Toponia Miller, founded Fatted Calf in 2003, first preparing the products in a rented Dogpatch kitchen and selling at the Berkeley Farmers Market (they have since added the Ferry Plaza Farmers Market). They quickly found an audience for their products, which range from raw cuts to prepared charcuterie and sausage. In 2008, they moved operations to Napa, opening their first retail shop at the Oxbow Market. The Fell Street location is their first in SF.

“I don’t think people should buy meat that is responsibly raised just because it’s the right thing to do,” says Boetticher. “I also think that meat from a good source that’s been raised well is just more delicious.” Boetticher buys from many of the same producers supplying the best SF restaurants and can order almost anything a customer wants.

For the holidays, in addition to turkeys and prime rib (dry-aged from Magruder and Prather ranches), Boetticher will sell alternatives for home cooks looking to break from the traditional. “Sure, prime rib is great,” he says. “But a whole fresh ham or a giant porchetta is a perfect alternative. They’re big, festive cuts that don’t require supervision. You throw it in the oven, take a walk, play with the grandkids, make a whole day of it.”

David Budworth, part of the city’s inner circle of butchers, works at both Marina Meats and Avedano’s. “There is so much more butchers can do that people aren’t aware of,” says Budworth, who champions goat leg roasts. “I know people like tradition, but I think you could start a tradition of doing something new every year.” And as for the ubiquitous filet mignon, star of so many celebrations? “I call it meat for beginners,” says Budworth. Which begs the question, if goat is advanced, then what’s intermediary?

Emotionally prepared to let go of the standing rib? The city's new breed of butcher shops can take you there.

Porchetta
Make like RoliRoti in your own home. At Fatted Calf, the butchers fabricate their massive porchetta from skin-on pork belly with loin attached—liberally seasoned with garlic, lemon zest, fennel seed, rosemary, and salt and pepper—then roll and tie it up. The hulking roast is around 20 pounds, though butcher Taylor Boetticher says smaller portions are available. To the hesitant, we offer these three words: Crispy. Pork. Skin.

Rack of Lamb
If you’re cooking a special meal for a smaller party (say, up to four people), racks of lamb are the ideal choice. An eight-rib rack will feed two, and because oftheir small size, the meat cooks quickly. For the love of all that is holy, don’t cook a lamb chop much beyond rare.

Fresh Ham
Steer a wide berth around the Honey Baked Ham store. Instead, pick up a giant bone-in fresh ham. For best results, make a hard cider brine, and give the meat a nice long soak. To gild the lily, brush the ham with a mixture of Prosecco and chestnut honey. Factor in about five hours (half hams are also available). Unlike most pork, a fresh ham is best cooked to an internal temperature of 160 degrees.

Duck
Should you want to emulate our friends across the pond, cook up duck for your holiday feast. The best ducks are the Pekin variety from Sonoma County Poultry, raised by fourth-generation duck farmer Jim Reichardt in Petaluma and sold locally at Bi-Rite Market, Avedano’s, and Fatted Calf. Score the skin, and roast the duck on a bed of carrots and potatoes. Also, try stuffing it with a whole orange, which perfumes the meat.

Rack of Lamb
If you’re cooking a special meal for a smaller party (say, up to four people), racks of lamb are the ideal choice. An eight-rib rack will feed two, and because oftheir small size, the meat cooks quickly. For the love of all that is holy, don’t cook a lamb chop much beyond rare.

• With the exception of racks of lamb, roasts should be brought to room temperature before cooking to ensure that they roast evenly and to cut down on overall oven time. Because they are comparatively tiny, cook racks of lamb right after you take them out of the fridge to help prevent overcooking.

• When it comes to pork and poultry, brine! You can use water for a basic brine, or experiment with hard cider or flavorful beer.

• If not brining, salt overnight to help season the roast all the way through.

• Tell your butcher what type of meat you’d like to serve and how many guests you’re feeding. Let him suggest the perfect holiday centerpiece. For best availability, inquire as far in advance as possible. You're not the only cook in this town.