Back in 2007, a globetrotting international lawyer decided she was fed up with city life after lengthy stints in London, Boston and San Francisco. When a friend suggested she move to Sausalito, she joked that the only way she'd live in Marin County would be on a houseboat.

So on a lark, they drove up to a real estate showing at Sausalito's Liberty Dock, and she was sold from the moment she walked in. Right away, the humble boat received a watertight makeover and a brand new name: Brown Sugar. Ten years later, it was time to take the home's design to the next level, with the help of San Francisco design firm LOCZIdesign.

Who lives here: An international investigations lawyer and her dog, Murphy 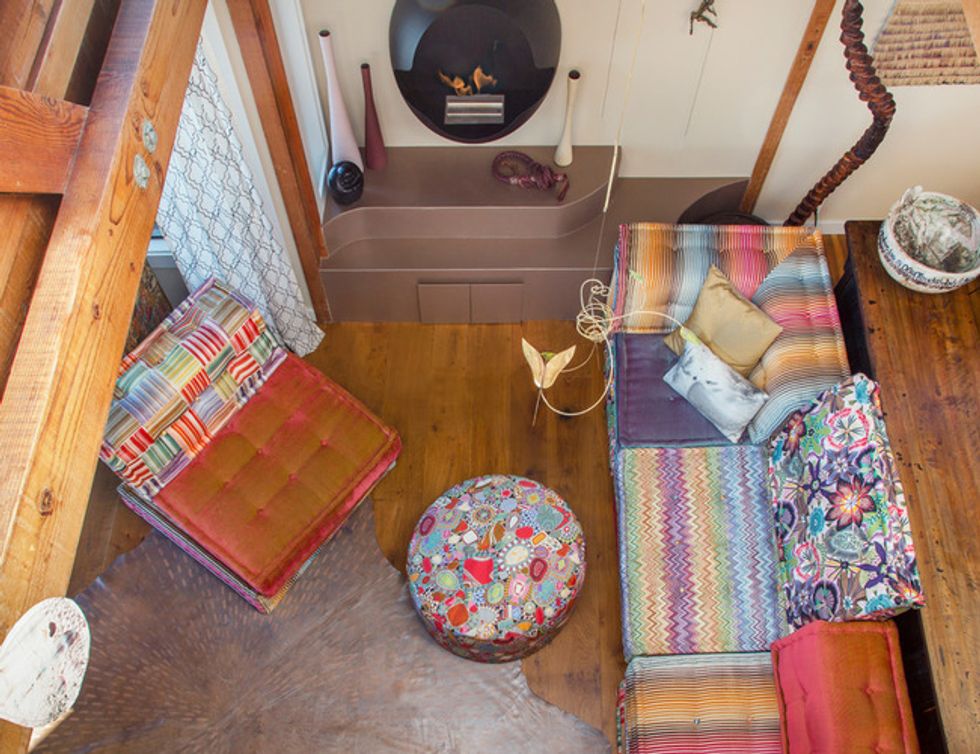 Another request from the homeowner was to include this Mah-Jong sectional from Roche Bobois that she had wanted for as long as she could remember. The sectional, now in the living room, was the first thing bought for the house. The leather rug on the floor is from Avo. 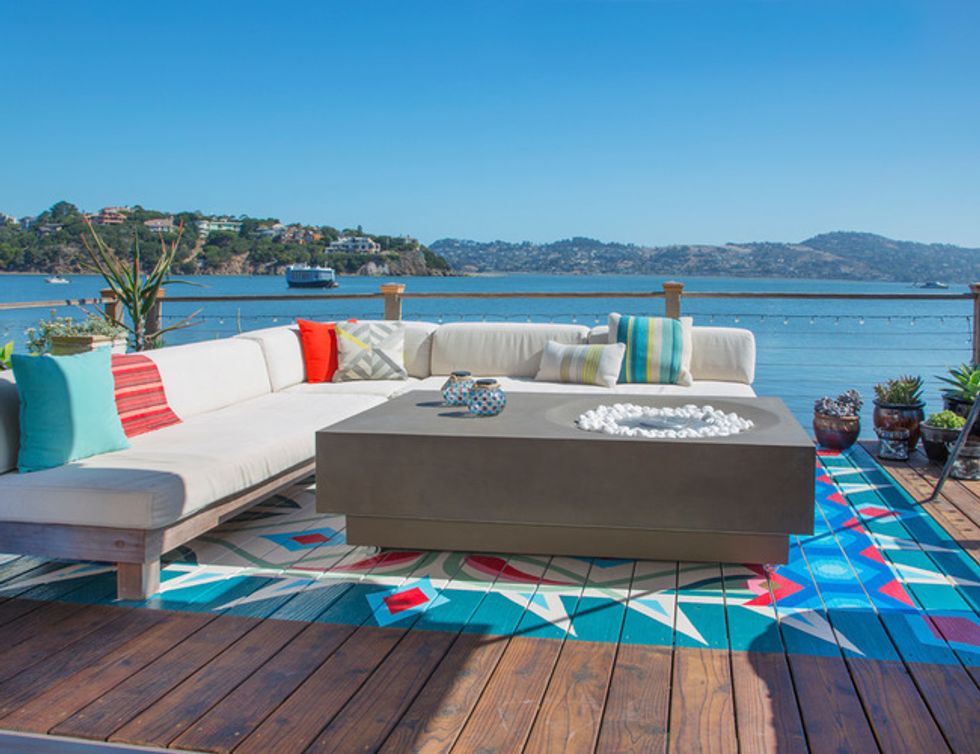 For the main deck, the homeowner already had a nice outdoor sectional that only needed the addition of some Sunbrella pillows to feel complete. This freed up the designers to focus on creating a custom design for the decking that at first glance looks like a rug. They recruited Lisa Donohue and Brynn Gelbard of Los Angeles' Londubh Studio to create a custom piece of art that they then painted directly onto the decking. 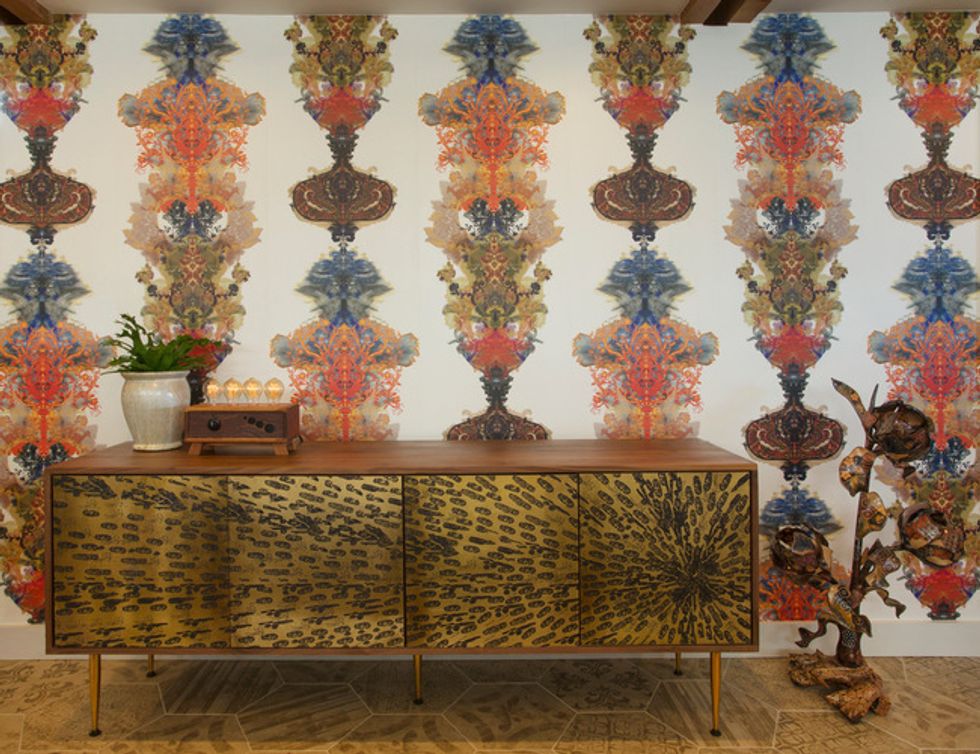 The front of the walnut credenza is covered in brass riveted to resemble a peacock's feather. The credenza is topped with a custom lamp fashioned from an old radio. A papier-mâché sculpture intended to look like a plant sits on the floor to the right of the credenza. 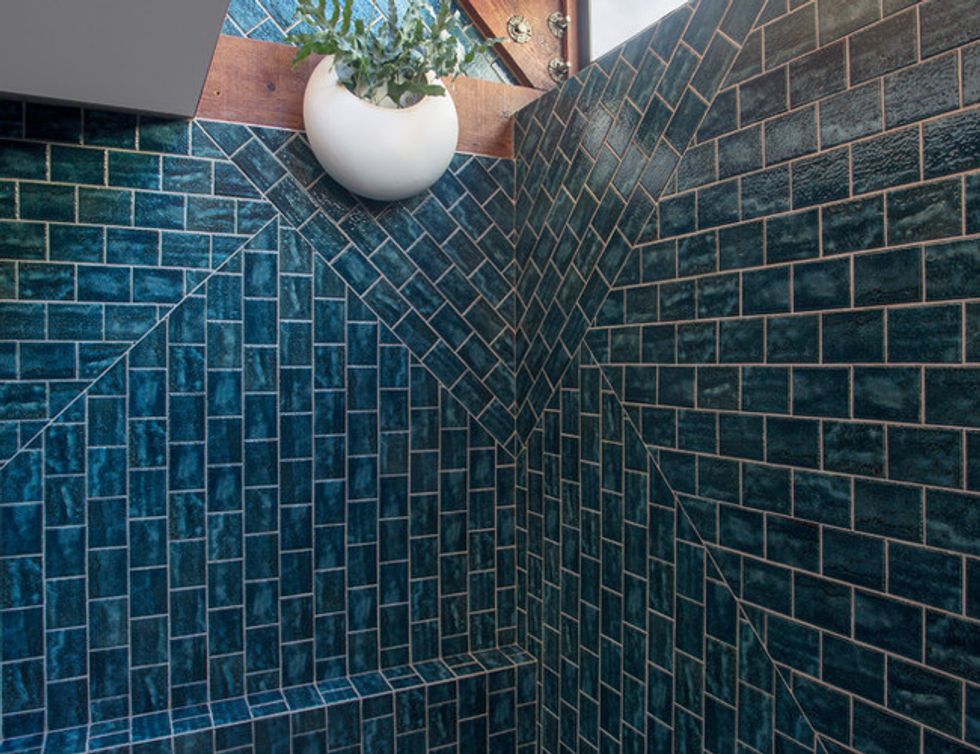 The tiles themselves are simple 2-by-3-inch Japanese tiles with multilevel glazing in greens and blues. The design team added interest by arranging the tiles at various different angles, which required some seriously math-heavy calculations. 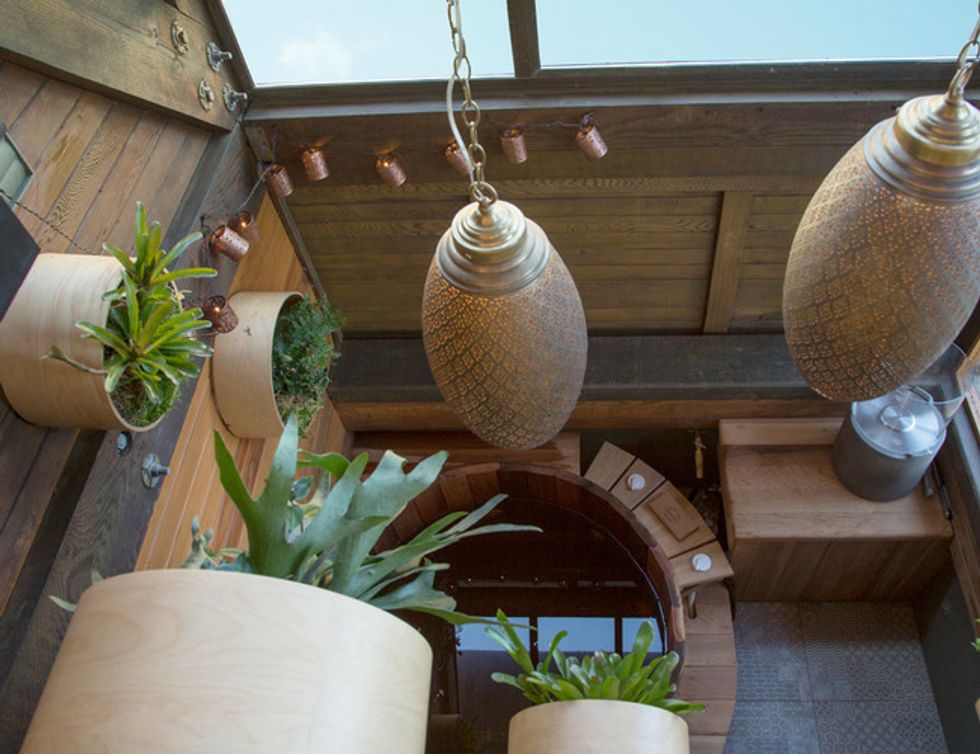 The designers and homeowner considered installing an outdoor shower or comfortable lounge area, but the room's vulnerability to wayward birds and bugs seemed to demand a barrier that would seal the room from airborne visitors without blocking the flow of fresh air. The solution was to enclose the skylight windows with glass, but everything from about 15 feet down is simply screened in. 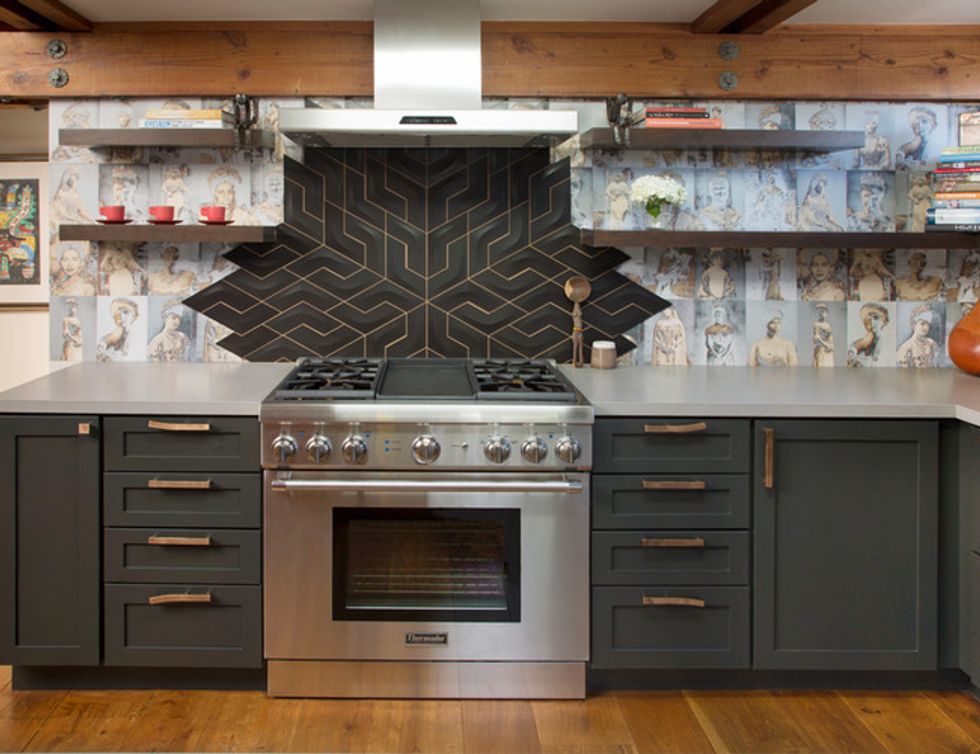 The backsplash is covered in a combination of a Trove wallpaper featuring the likenesses of famous historical queens and a geometrical porcelain tile from Global Tile Design. The Design-Craft cabinetry is semimodular, delivered in one of its standard finishes, Smoke Gray.

There are many docks sprinkled across Sausalito's shoreline, each one meandering out into the Bay and creating the floating equivalent of a traditional suburban neighborhood. Neighbors in these communities tend to be close-knit, bonded by the idiosyncrasies and rigors of life on a boat. In fact, the architect who originally designed this houseboat lives just a few doors down on the very same dock.

This home also holds the distinction of being one of the largest on the dock, "grandfathered in" after community regulations limited the allowable hull size. The boat itself is highly secure, attached in four places to enormous 24-inch-diameter pylons anchored to the bay floor, but working from a dock imposed some unique constraints. For example, demolition debris had to be removed daily by carting it down the shared dock, some four city blocks to the parking lot from the homeowner's front door.

The boat spans three stories, with over half of the bottom level submerged, which keeps it about 30 degrees cooler than the rest of the home. To equalize the temperature, the design team installed radiant floor heat throughout the hull. To create a spacious master bedroom, the team strategically reconfigured the layout, relocating door openings to improve flow and removing a wall from the office to create a larger space.

The design team kept the bed simple, soft and elegant in deference to the primary focal point of the room: a modernist credenza against the wall opposite the bed. The vivid wall behind the credenza is covered in Timorous Beasties' Grand Blotch Damask wallpaper. The homeowner fell in love with the wallpaper company when she used to live next to its showroom in London.

The focal point of the master bathroom is an enormous walk-in shower covered with tile laid in an unconventional manner. Cutting and installing the shower glass and tiling on a perpetually moving boat presented a challenge to the installers. One of the tradesmen happened to notice that there was a particular point in the tidal cycle at which the boat seemed most stable, so the team made sure to snap their plumb lines at the same time every day.

A two-story indoor-outdoor bathroom features a Japanese soaking tub, ethanol fireplace and Moroccan brass pendants. This room was originally designed as an outdoor deck space that was primarily used for storage. Due to the narrow stairwells, hauling in the tub was a major undertaking that begged for a creative solution. The answer came in the form of a La Cantina window on the main level that can be completely opened for bringing in bulky items such as the tub, bed and sofa.

The designers felt fortunate to work with a homeowner who had such a vision and passion for the idea-generation process. Her kitchen ended up being a laboratory for some of her favorite design ideas and materials. The previous kitchen was loaded down with a tall fridge and traditional upper cabinets, resulting in a feeling of confinement. The new design preserves the U-shaped footprint of the cabinetry but replaces the uppers with open shelving and the tall fridge with a set of three paneled refrigerator drawers and one freezer drawer.

All bedding, the nightstands and the bed in the guest room are from Horchow. Curtain panels were customized (cut and fit to size) for the sliding glass doors. The rug was purchased during one of the homeowner's many travels abroad, as was the 60-inch round mirror.

The below-deck renovations included the removal of a heavy iron claw-foot tub that the homeowner simply hated. But the design team wanted to find a way to reuse it in a way the homeowner would adore. So the designers turned to Crooked Nest, a floral boutique in Oakland that supplied all the home's greenery. They asked their trusted florist to simply "do something cool with it." What they received was a lovely succulent garden, complete with a sculpted woman's head thrown in as a surprise.

// This story was written by Jess McBride and originally published on Houzz.

Reconfigure the Deck With an Outdoor Sectional

Credenza, Buffet, Sideboard or Server - Which One is Right for You?

Pretty Pendant Lights in Every Finish