Break out your flower crowns and your crochet crop tops: The Summer of Love returns to San Francisco this year for a 50th anniversary celebration.

As part of a series of celebrations leading up to this summer, the San Francisco Arts Commission asked three local artists to examine the historic season of revolution through a contemporary lens for its popular Art on Market Street Poster Series. The first in the series, The Zeitgeist by Deborah Aschheim, highlights some of the people and events that defined 1967 through highly detailed pen and ink drawings.

From now through May 12, 2017, pedestrians along Market Street will see scenes that recall the 1967 Spring Mobilization, the Vietnam War, and the Human Be-In, alongside portraits of individuals including City Lights Books founder Lawrence Ferlinghetti. Each image is contextualized by a caption: A drawing of a Black Panther woman is accompanied by a quote from famous Panther member Kathleen Cleaver. 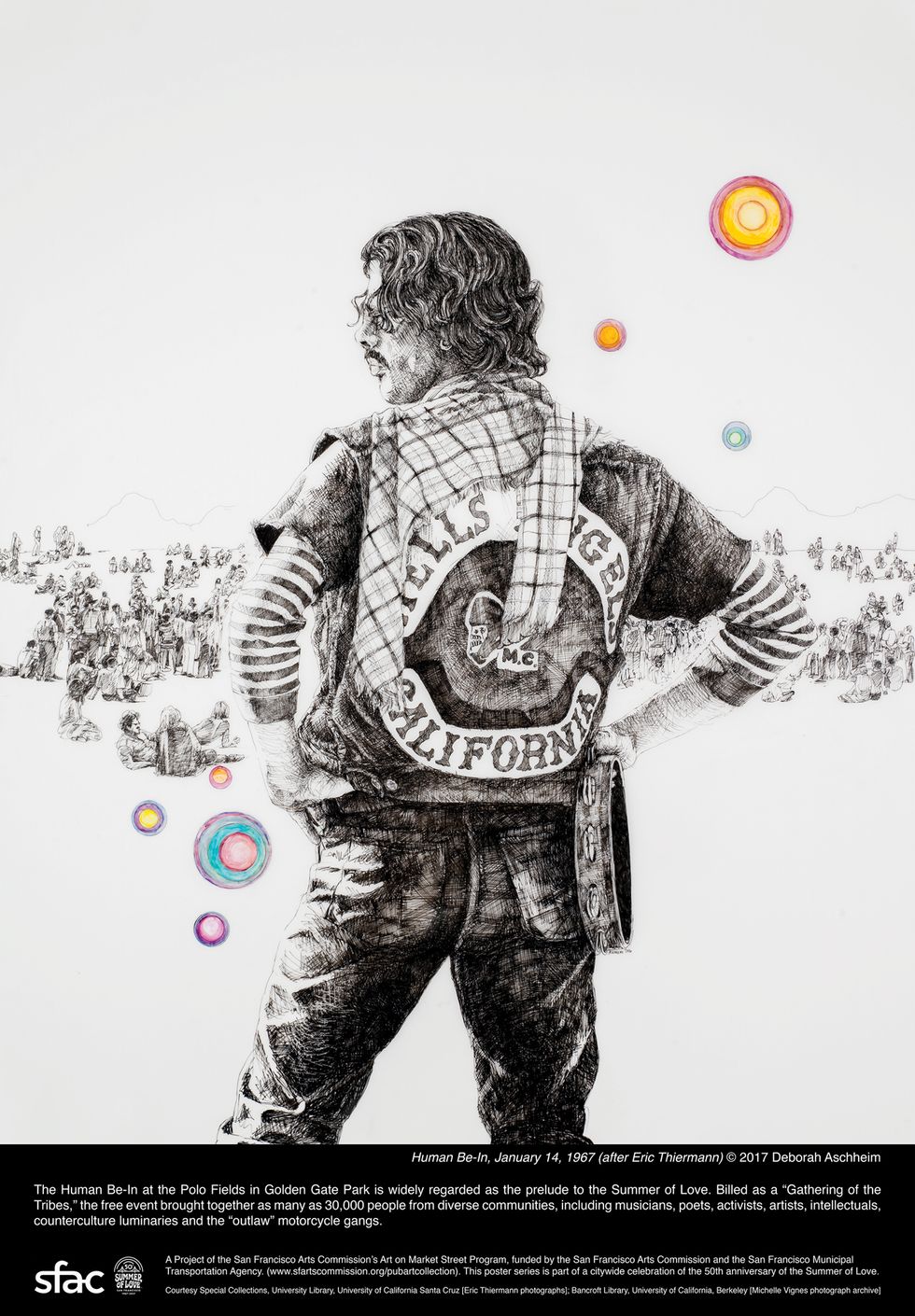 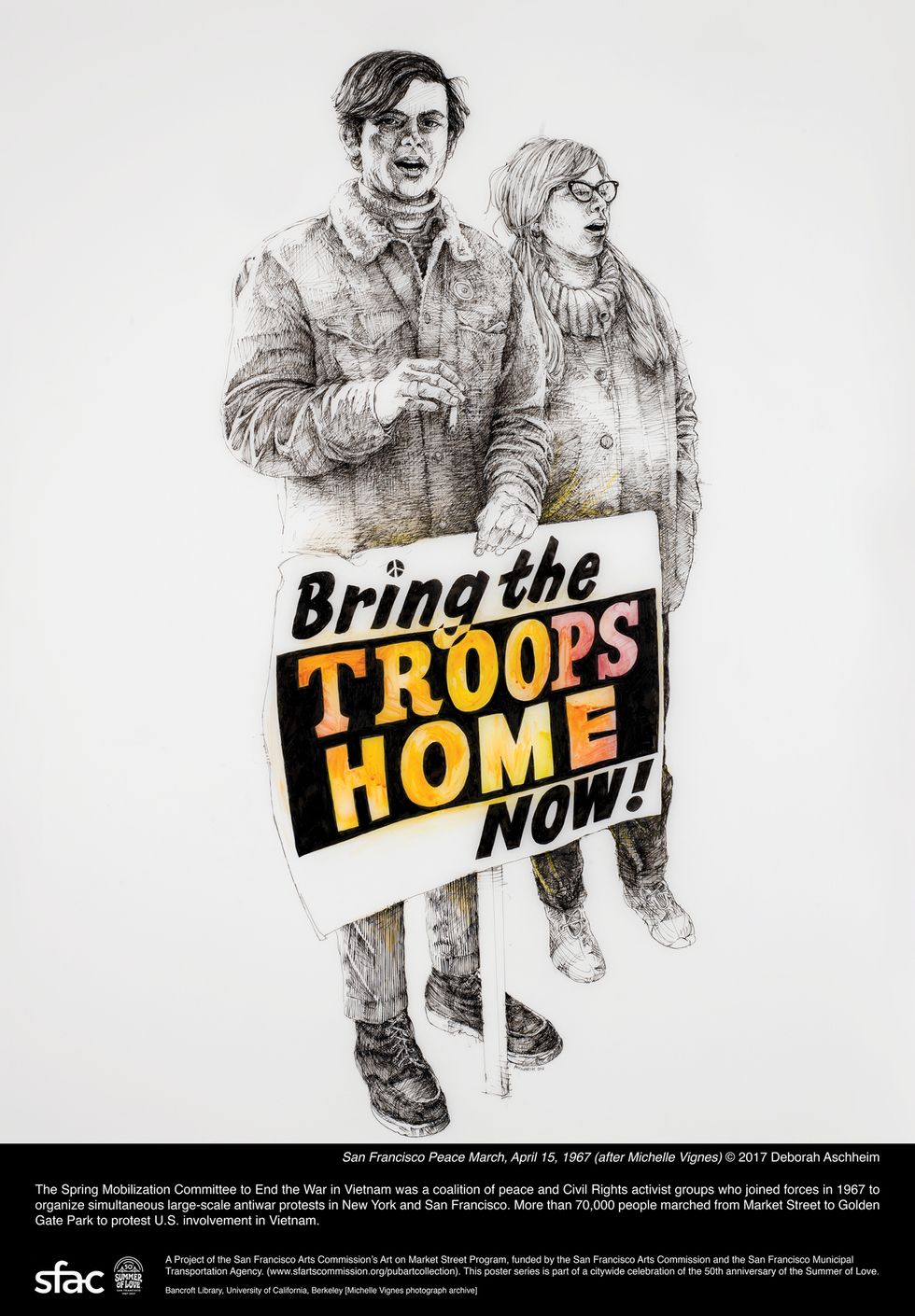 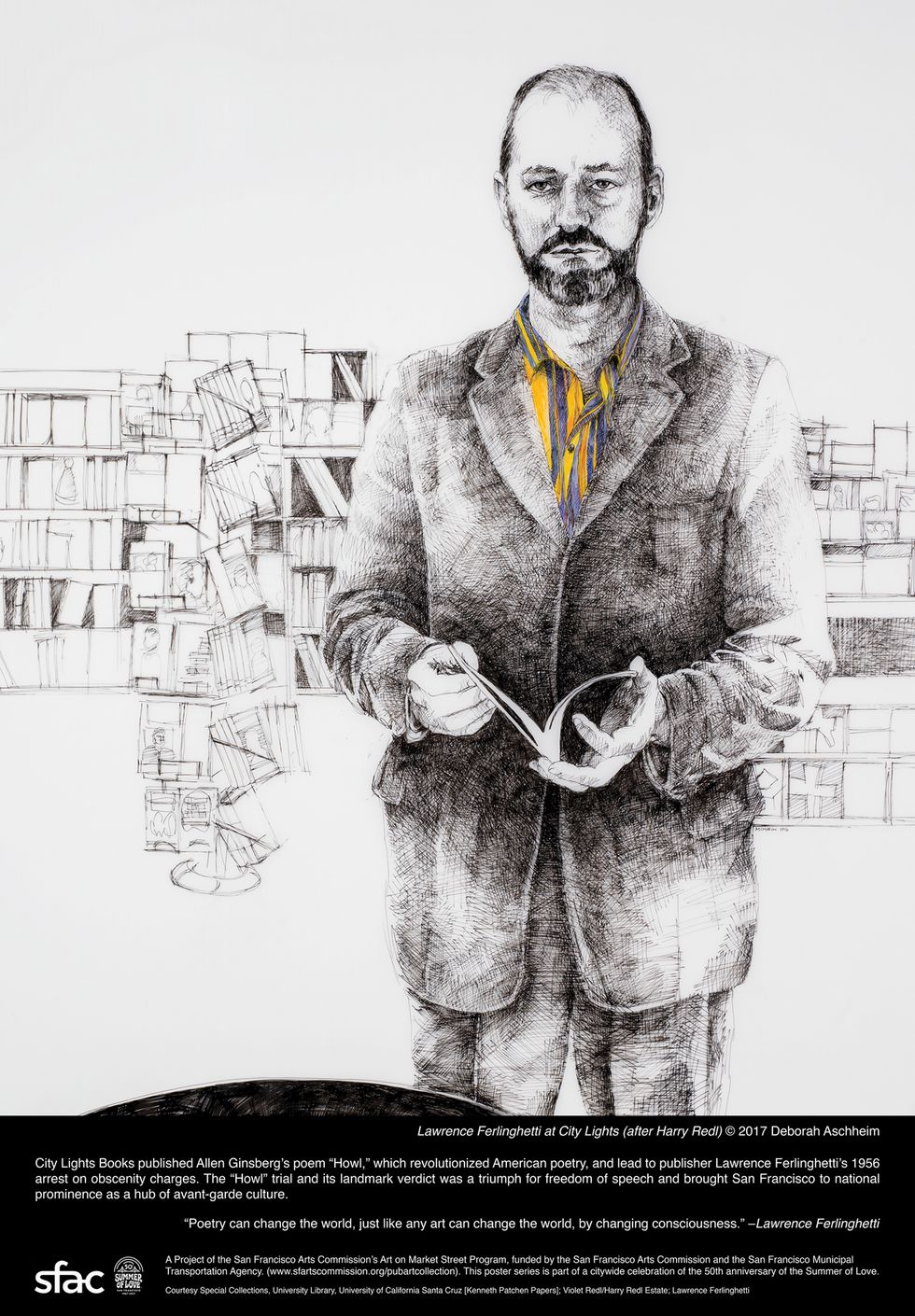 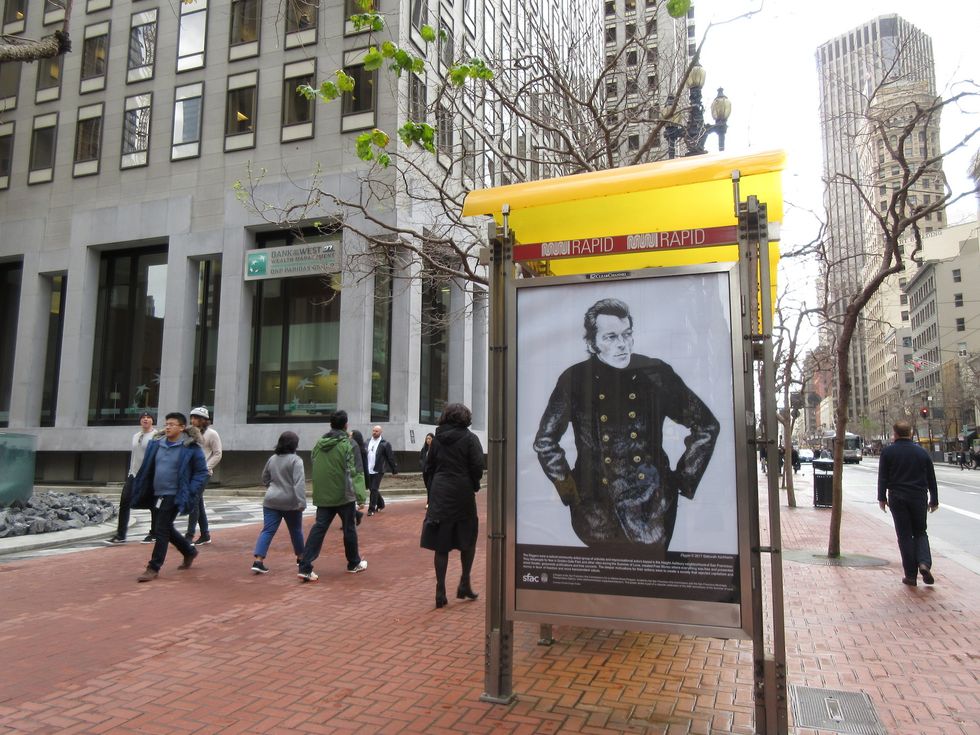 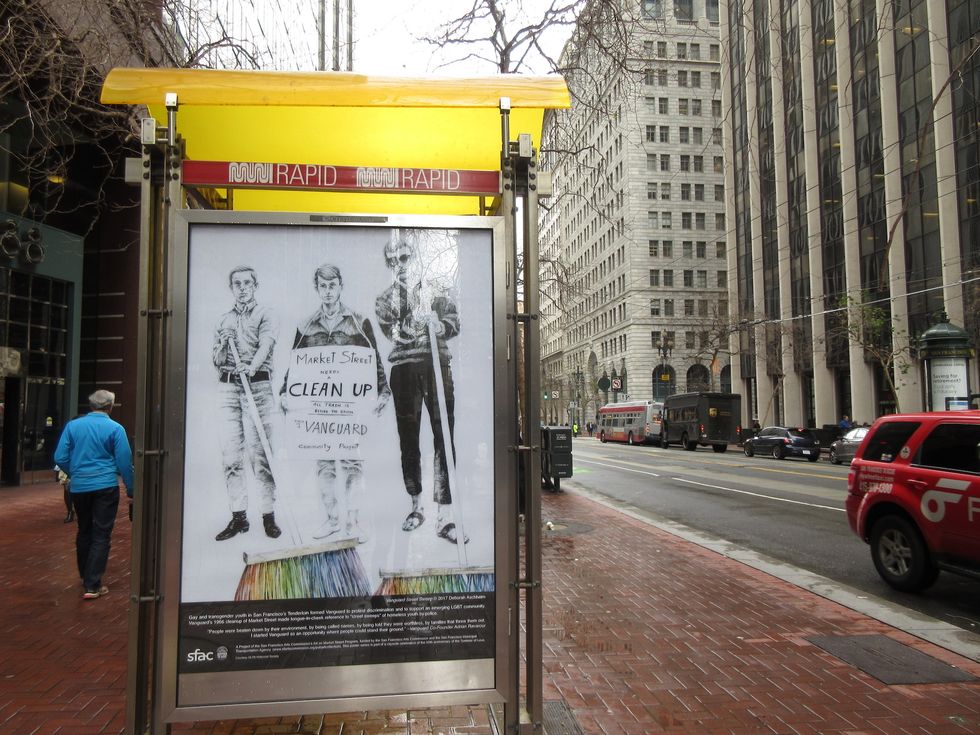 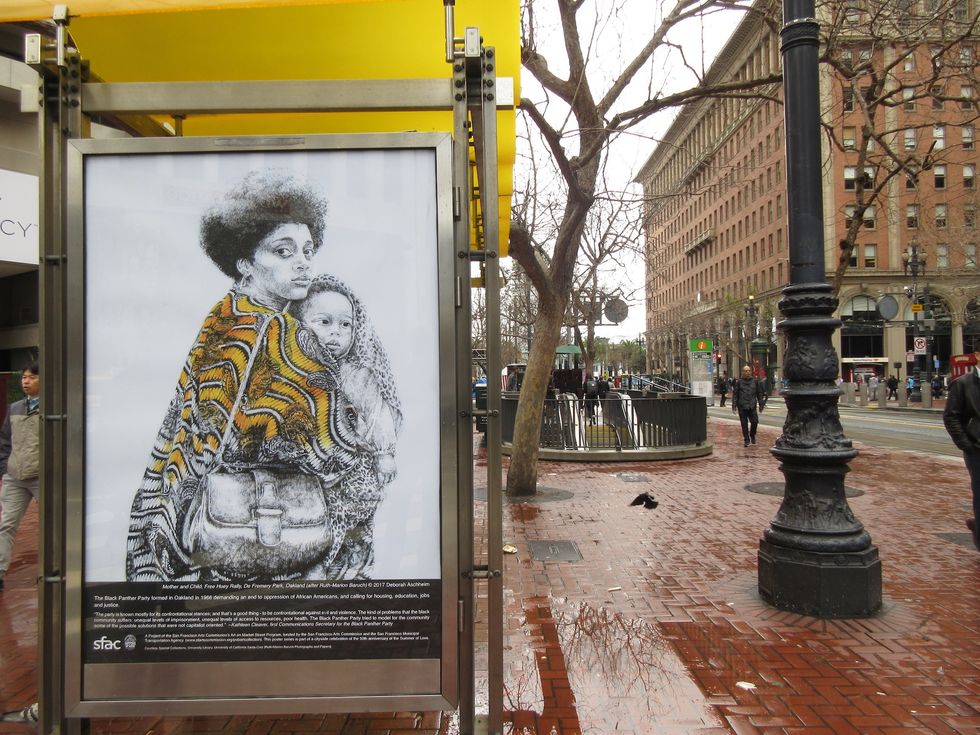 "Deborah Aschheim's beautifully rendered posters capture the spirit of the ideas and radical expression that made the San Francisco Bay Area the epicenter of the counterculture movement," said Director of Cultural Affairs Tom DeCaigny. "The 50th anniversary of the Summer of Love is an opportunity to reconnect with its important legacy of political activism, inclusiveness and, above all, love."

To prepare for the series, Aschheim rigorously researched the archives at UC Santa Cruz and UC Berkeley, unearthing the stories of people who participated in the Diggers, an anarchist art troupe that was a fixture of the Haight-Ashbury; the Vanguard, an early LGBT rights group based in the Tenderloin; and a number of other significant political activists from the late 1960s.

"My project explores the intersection of political and social utopian ideas that drew people to San Francisco, from the Free Speech movement at Berkeley to the art, music, and lifestyle scene," says Aschheim. "I hope that entrepreneurs and billionaires have not replaced revolutionaries and poets as our heroes. I want to re-animate an authentic vision of 1967 that still has the power to inspire us to disrupt society in creative ways."

// The Zeitgeist can be seen in Muni bus kiosks on Market Street between Embarcadero and Eighth Street through May 12. Subsequent series will feature new work by Sarah Hotchkiss and Kate Haug.