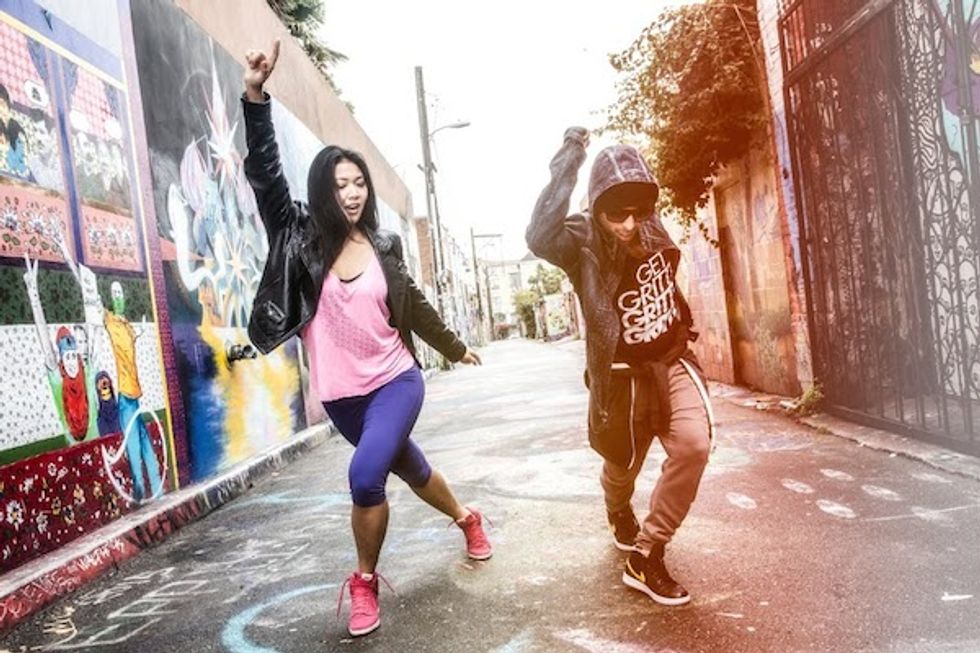 Sweat SF: Everything You Need To Know About Hip Hop at Uforia Studios

"Anyone can dance! Seriously, even if you think you need to be drunk at a wedding,” uforia studios owner Sarah Lux exclaims regarding her daily Hip Hop Class.  “The class is very repetitive and builds throughout so you do each move many times, and love that at the end you know the choreography to basically an entire song!"

After arriving at the Nob HIll studio, with my fiancé in tow, our Hip Hop Class instructor, the energetic Briana, bounced around from group to group introducing herself as everyone did some form of obligatory stretching. Within seconds of her coming over to us, I felt the need to blurt out, “We’re beginners,” as if our wallflower location in the back of the studio didn't make that clear enough. She laughed, “Why is everyone telling me that?”

Relief came fast as we realized we were not alone. Briana quickly put any nerves of embarrassment to ease when she turned up the music and yelled her one rule for the next 45 minute: “You must have fun!”

Briana broke up the routine into four-count combinations, walking us through each series of steps slowly before leading on tempo.  Each move could be executed at a basic level (ours) or with added flare for the more advanced students (the girl next to me sporting a hooded vest and hammer pants had me brimming with envy by the time the class ended). And there's little time for self-doubt; just when you have one step down, Briana serves up the next. Unlike some dance classes that repeat the same song over and over and over, Briana mixes up the soundtrack throughout the class.  Each song rotation breathed new life into each round and. This series of different songs helped prove that a single routine could be applied to almost any tune.

“We work really hard to have our clients laugh and smile in class and feel connected to each other and our community,” Sarah explains. Nob Hill is home to uforia studios’ second location. Sarah and her husband first launched in Palo Alto, and San Francisco wasn’t far behind. “The city has so much energy and so many interesting people,” Sarah explains. “Of course we also thought that our mix of classes would work well in the city, especially hip hop as there are very few options for dance/fitness classes in SF."

Best of all, the class sticks with you. Later that night, I caught my fiancé, who was initially reluctant to join me at Hip Hop Class, performing the day's entire hip hop routine, alone, in the kitchen.

uforia studos is located at 1561 California.  Individual classes are $23 with discounted rates for Series Packages and New Client Specials.

Join Sarah and her team at the Nob Hill studio's grand opening party on April 17 for mini classes, food, and more!