San Francisco has had a long love affair with food. This week, we celebrate our long-held status as a culinary capital of the world with a look at our local restaurant menus of yore. See what was considered to be foodie fare throughout the decades. 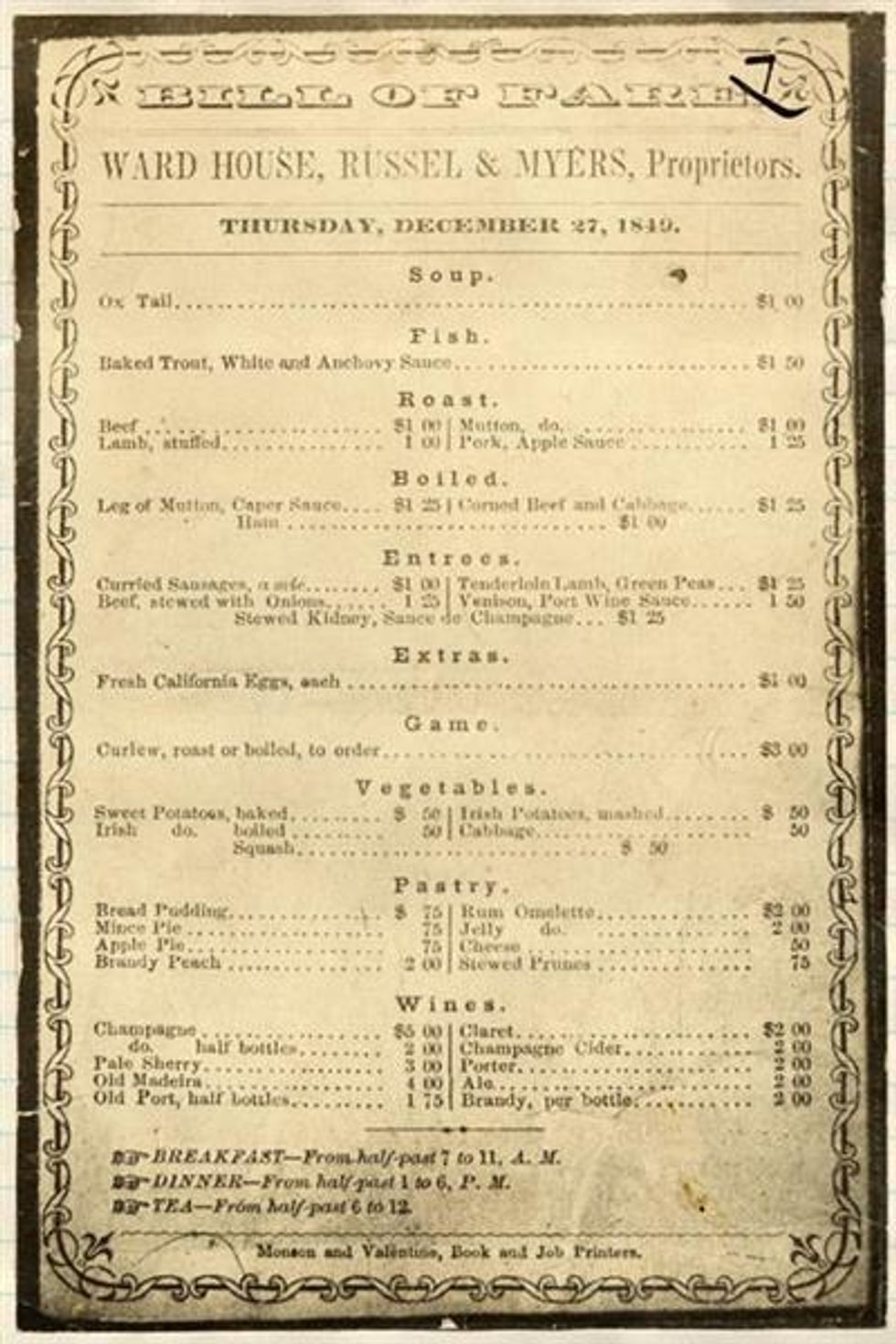 The Ward House, which was situated on the southwest corner Clay and Kearny, was described as a good hotel, and was popular during the Gold Rush. Miners liked to show off their gold by spending it on food, and this menu (bill of fare), dated December 27, 1849, shows the Champagne, different types of meat (like curlew), and eggs (a staggering $1 each) they would have ordered up a storm. (via California State Library/Tumblr) 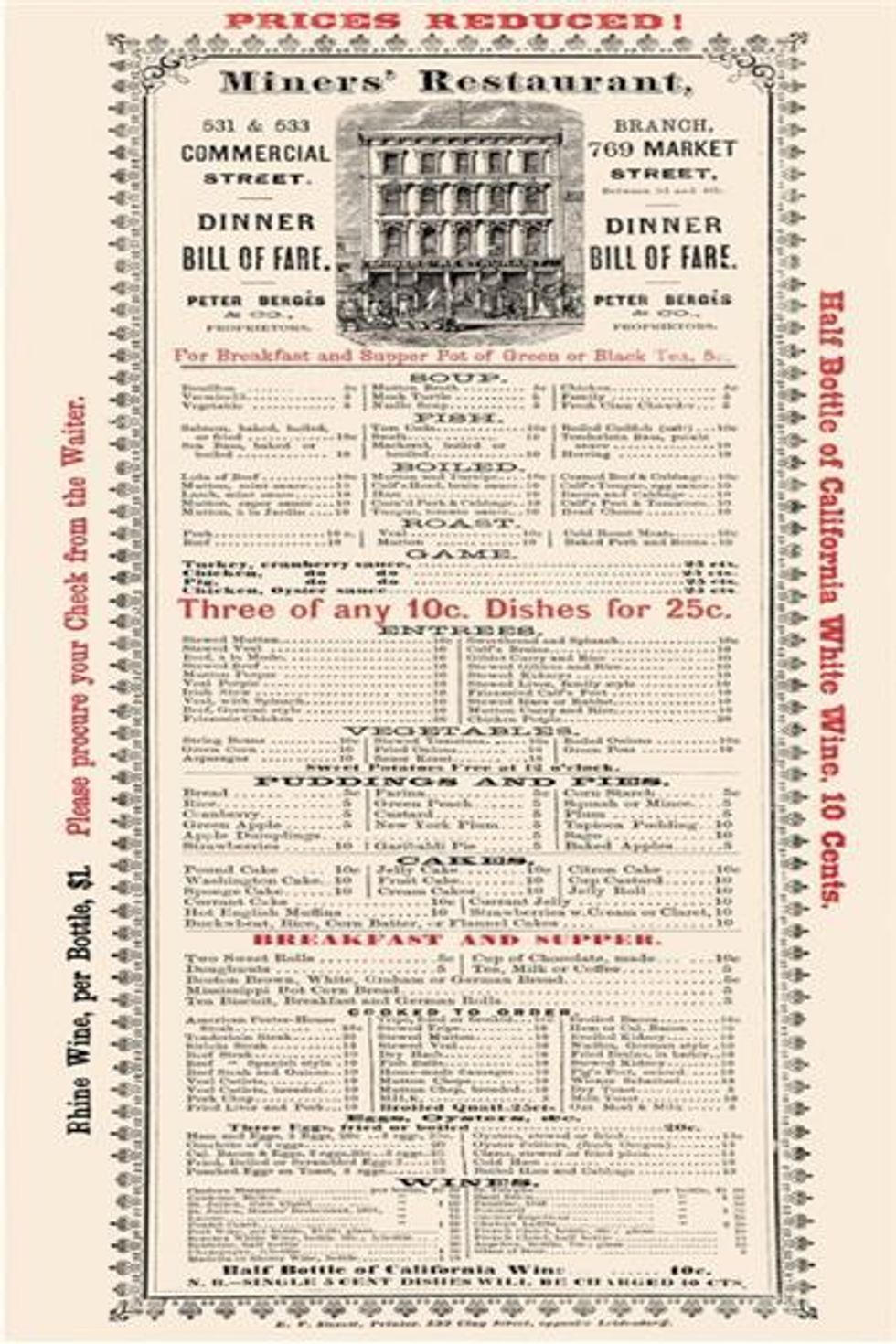 At the Miners' Restaurant, those searching for gold could get a bite for 10 cents. There are meats of all varieties on this 1875 menu, a large assortment of sweets, and the clam chowder and oysters you see on menus to this day. (via Love Menu Art) 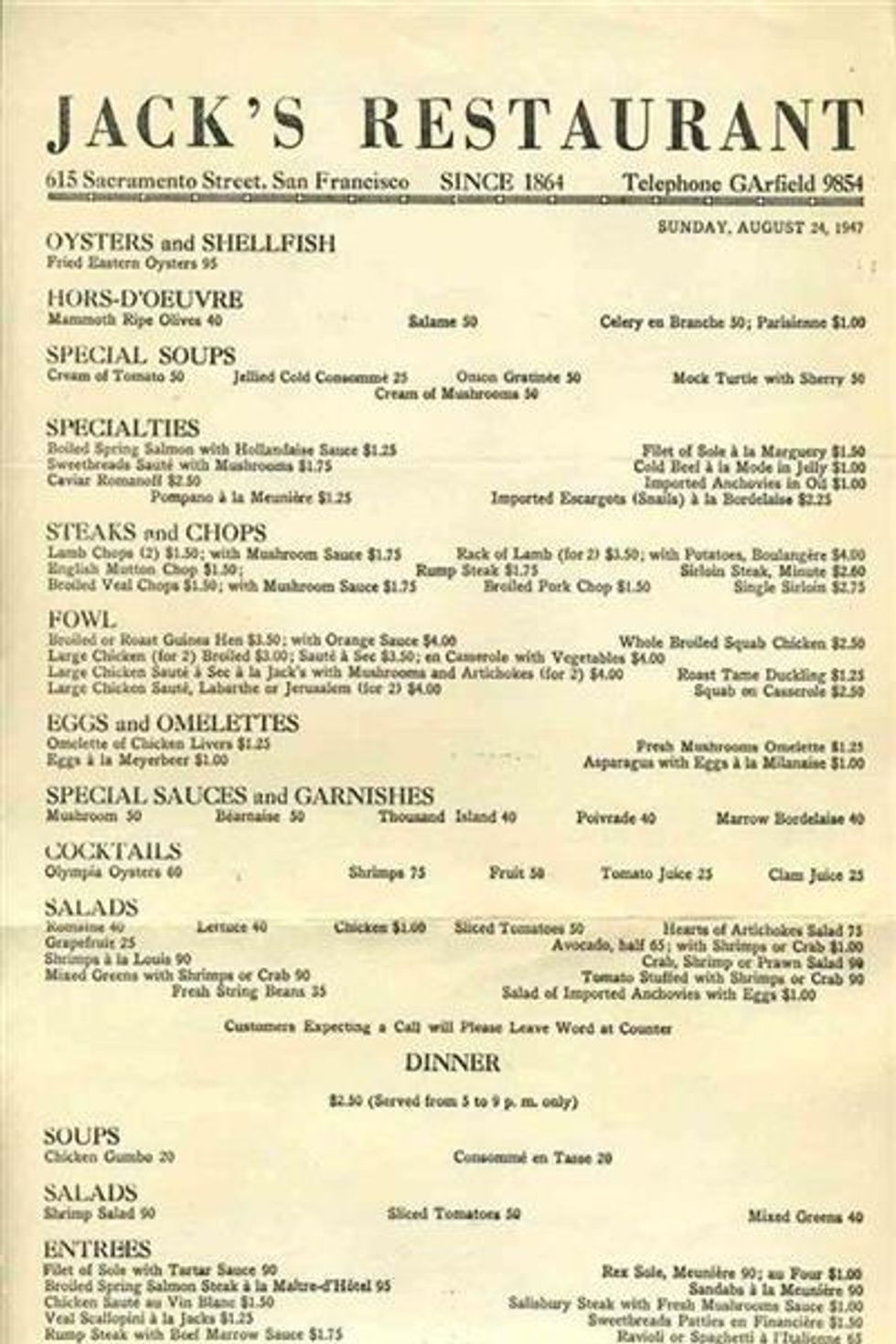 Opened in 1864, Jack's Restaurant, located at 615 Sacramento Street, was the second oldest restaurant in the city, followed by Tadich Grill. This menu, from August 24, 1947, features the sauteed sweetbread, which was still offered at Jack's in the 2000s. (via eBay) 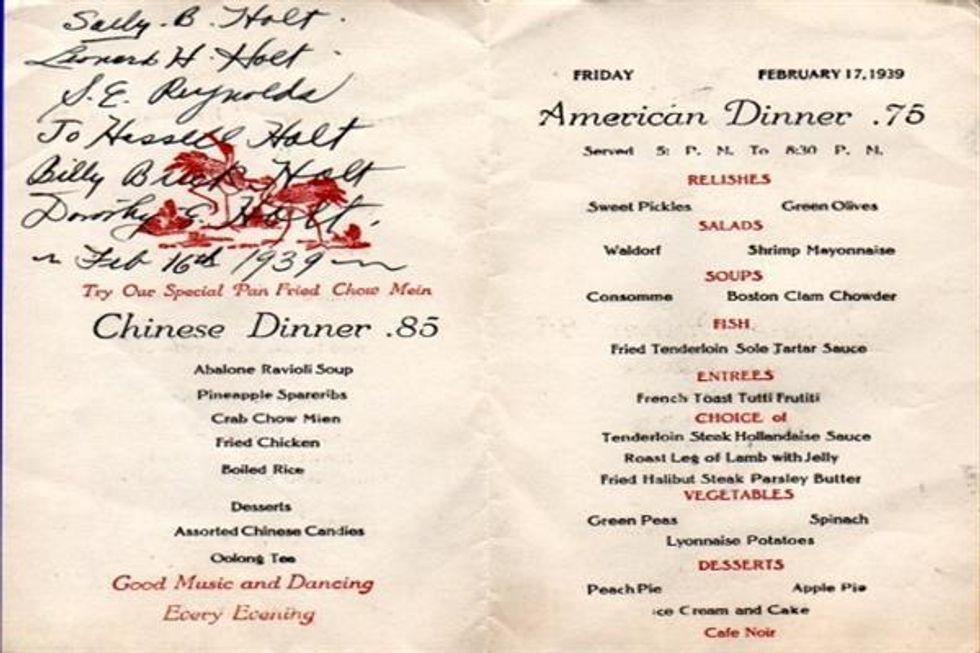 This February 17, 1939 menu is from the New Shanghai Cafe at 453 Grant Street in Chinatown. The Golden Gate International Exposition happened that year, which might explain the Americanized options. Classic chow mein is on the same menu as french toast tutti frutti. 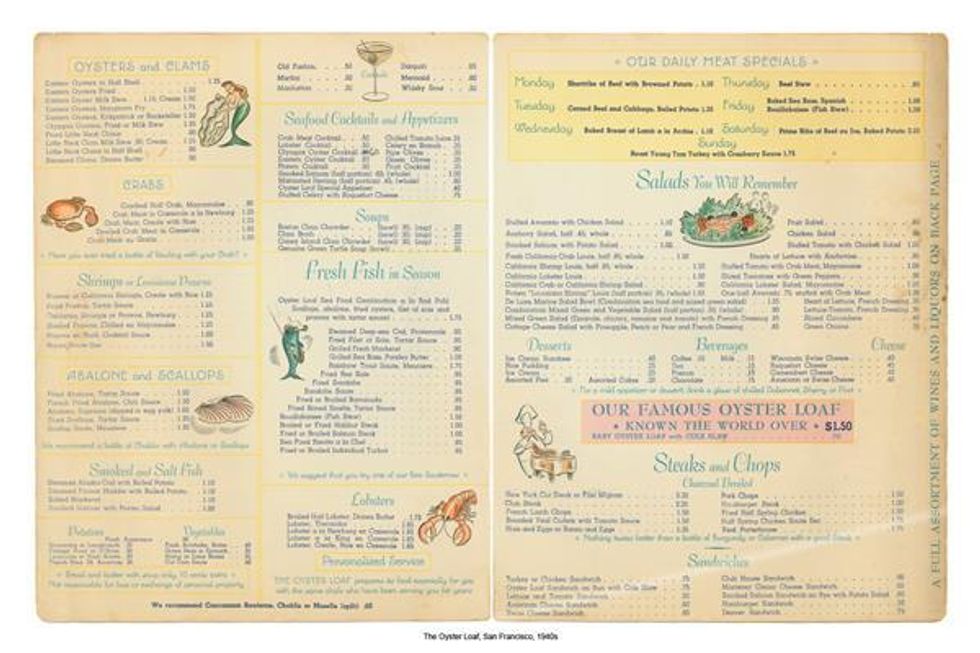 The Oyster Loaf Restaurant at 30 Kearny specialized in a San Francisco invention: the oyster loaf. This consisted of "a thick hunk of crusty bread hollowed out and stuffed with breaded and fried oysters." This particular menu is from the 1940s. (via Love Menu Art) 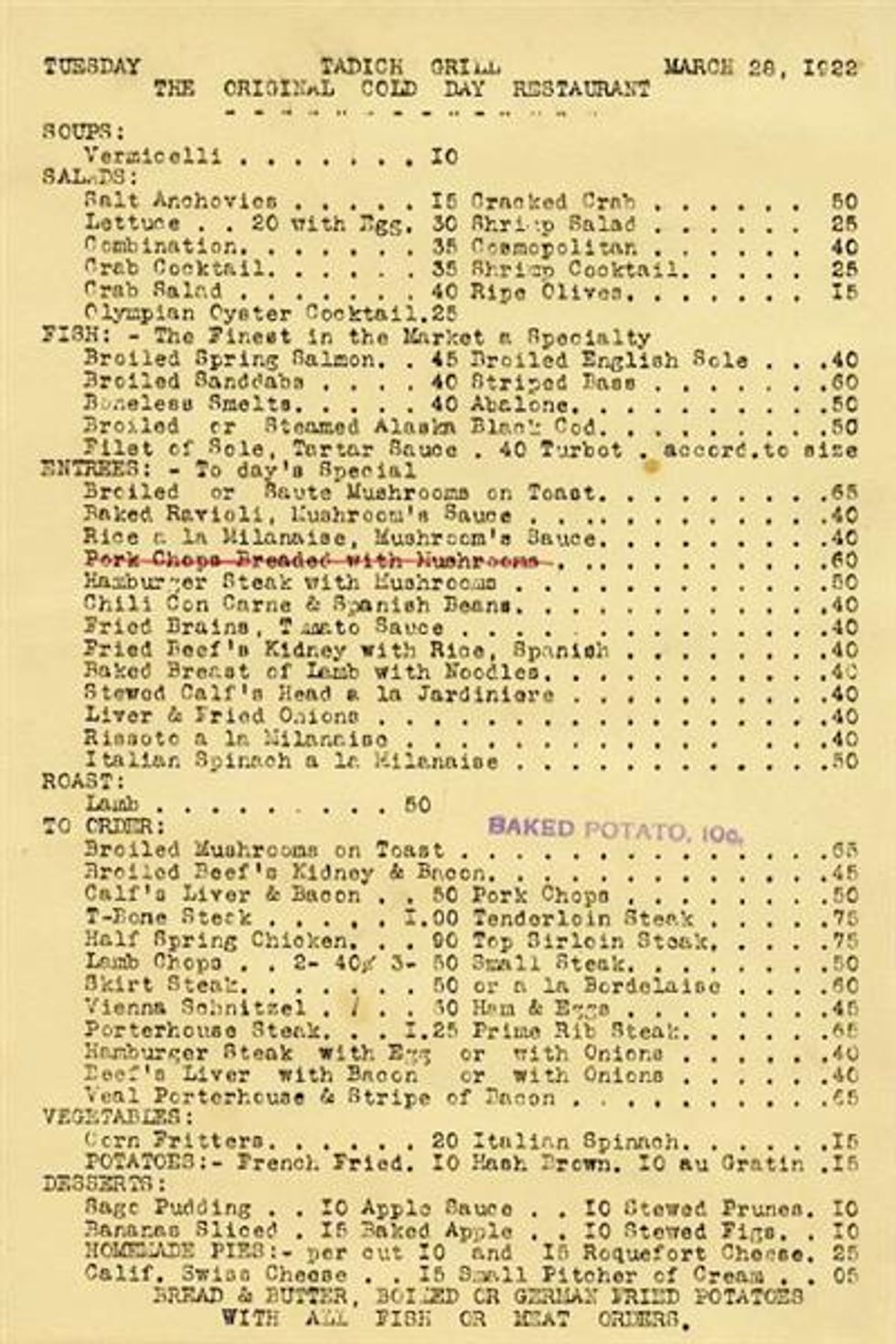 Tadich Grill, San Francisco's oldest restaurant, has been open for over 166 years. It has always been a seafood restaurant, and offers a variety of seafood options on this March 28, 1922 menu. (via California Historical Society/Flickr) 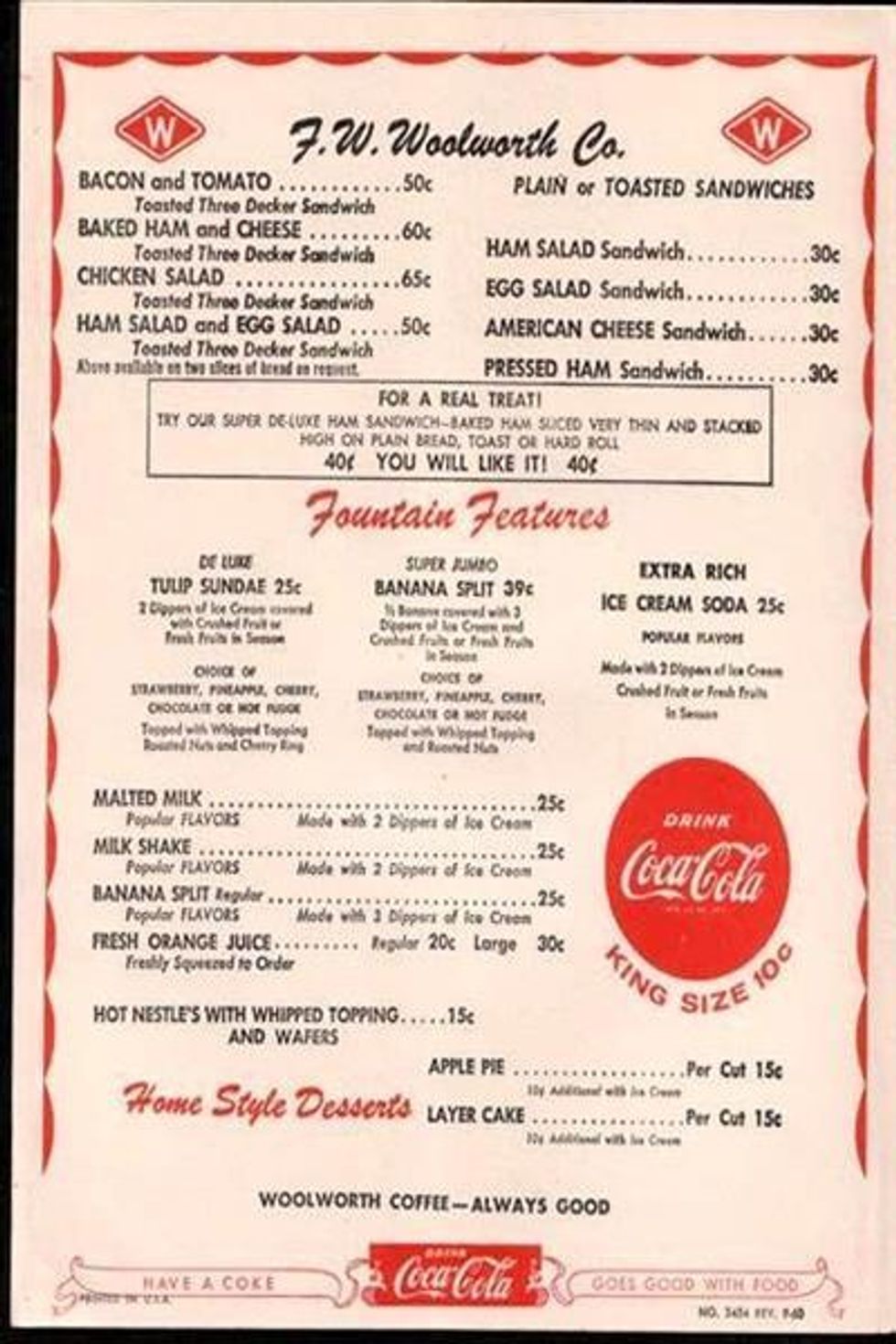 Soda fountains were all the rage in the 1950s and 1960s, when this Woolworth's menu was created. So were luncheonettes, often seen inside five-and-dime stores, where you could grab a quick bite while shopping. (via Pinterest) 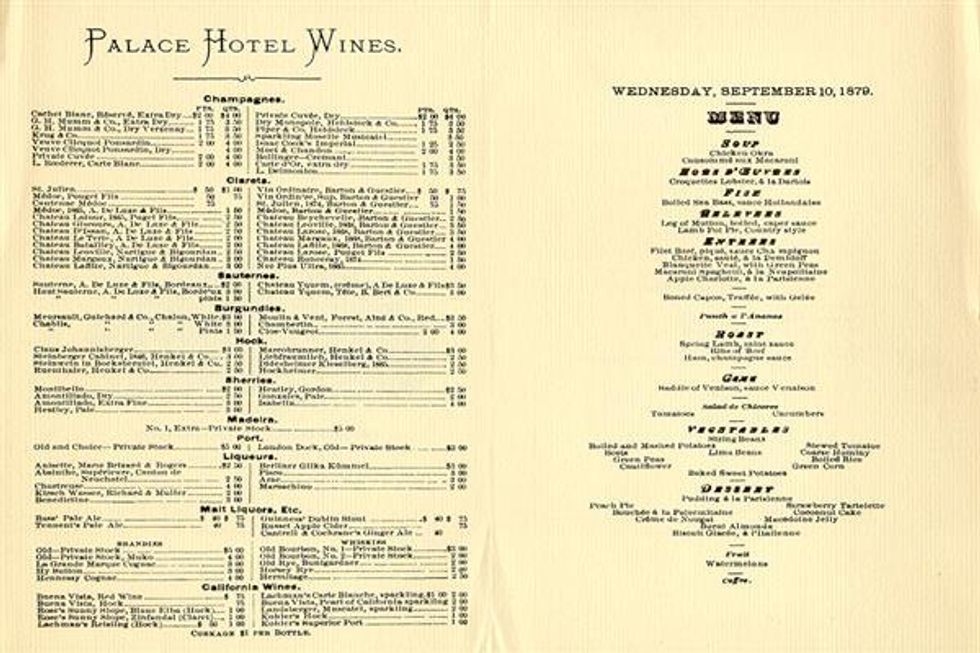 The Palace Hotel was meant to bring an air of elegance to San Francisco. If you take a look at this September 10, 1879 menu, you see that they delivered even back then. An impressive variety of Champagne, lobster croquettes, and chicken saut´ a la Demidoff made for a sumptuous meal. (via Los Angeles Public Library) 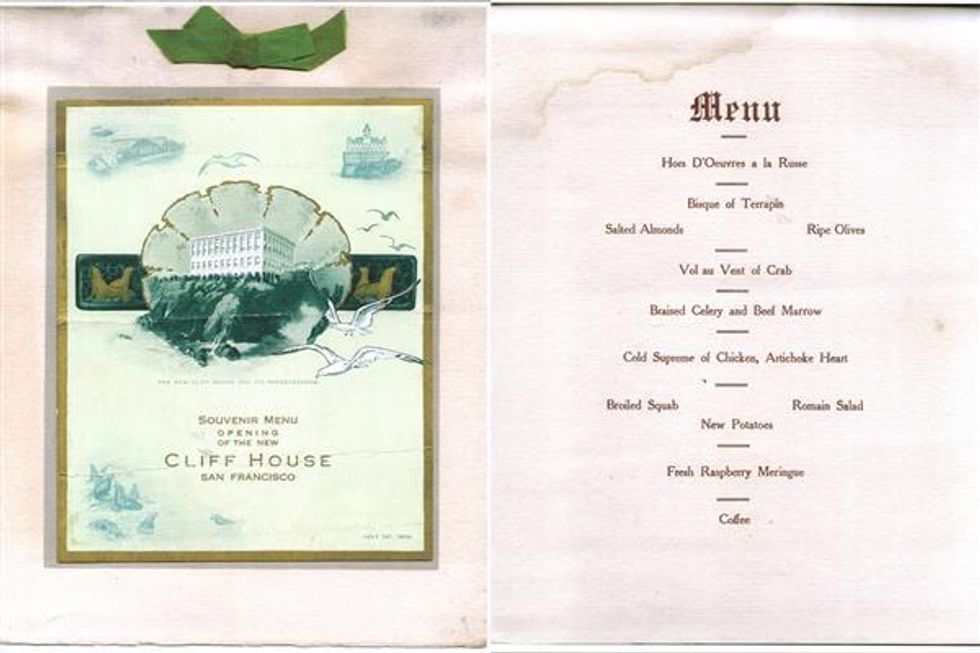 The Cliff House has gone through several incarnations. This menu celebrates the July 1, 1909 reopening of the new Cliff House. (via Menu World)