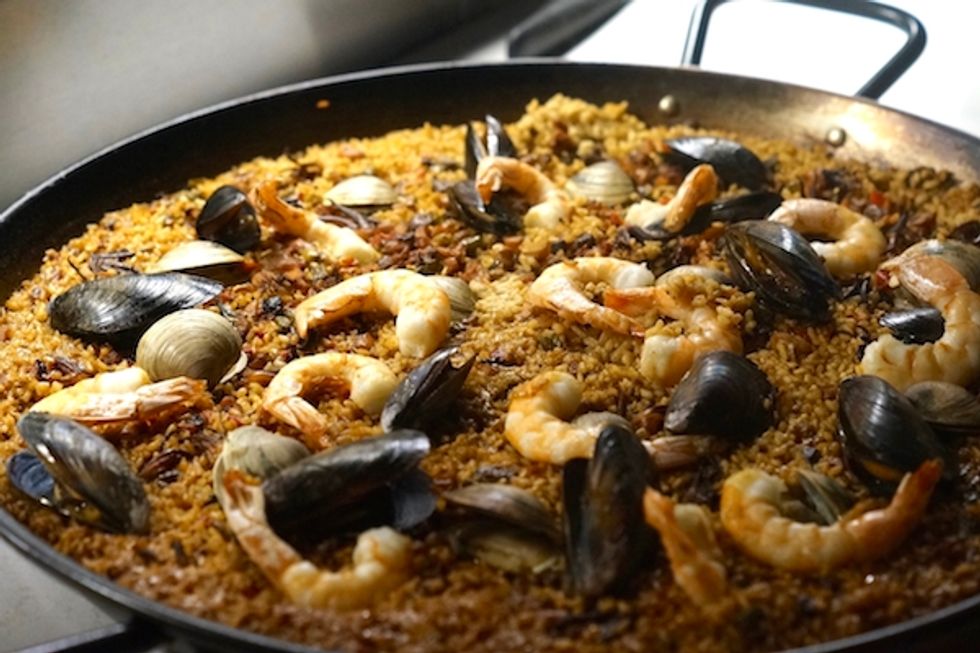 Telefèric Barcelona Brings the Flavors of Spain to Walnut Creek

Walnut Creek may seem a world away to a San Franciscan, but consider this: a 35-minute BART trip is significantly shorter than a flight to Spain for foodies seeking delicious Barcelona-style tapas. Make Telefèric Barcelona your tasty reason to make the short trek east.

Twenty-two years ago, chef/restaurateur Soledad Urabayen brought pinxtos (northern Spanish bar snacks) to the Barcelona region when she opened her first restaurant, in the nearby village of Sant Cugat. Now her son, Xavi Padrosa, is bringing his mom's recipes to California with the opening of Teleféric Barcelona's first U.S. location.

While it's true that there are damn fine tapas to be had elsewhere in the Bay Area, Telefèric makes the case for a venture to Walnut Creek with modern, festive design by Arcsine (the same firm that outfitted Oakland's Duende) and truly authentic fair.

Pinxtos range from a hunk of Spanish tortilla on crostini to the Spanish equivalent of a pig-in-a-blanket, and all are wheeled around on dim-sum style carts. From the kitchen, celebratory shouts of "Paella!" announce that a fresh batch, served in piping hot pans, is on its way out. Other Spanish specialties include a “secret” cut of Ibérico pork; a perfectly cooked egg in pisto; and, Padrosa’s favorite, the pulpo trufado (grilled octopus served with decadent truffled potato cream). Factor in home made croquettes and street churros drenched in Valrhona chocolate, and you’ve got good reason to make a night of it.

But don't forget the drinks. Calavera's cocktail expert Michael Iglesias consulted on the bar menu—a curated cocktail list of expert showmanship, from the gold-dusted Alchemist to a potpourri of aromatics in the gin-based Spanish Merchant. Adventurous drinkers might try the porrón, a Catalan wine pitcher that is held at arm’s distance and poured directly into the mouth (a ritual also practiced at Michael Chiarello's Coqueta in SF, where Iglesias once managed the bar). Telefèric's Porrón de Rebujito is a concoction of manzanilla sherry, lemon, and cinnamon.  //  1500 Mt. Diablo Blvd. (Walnut Creek), telefericbarcelona.com