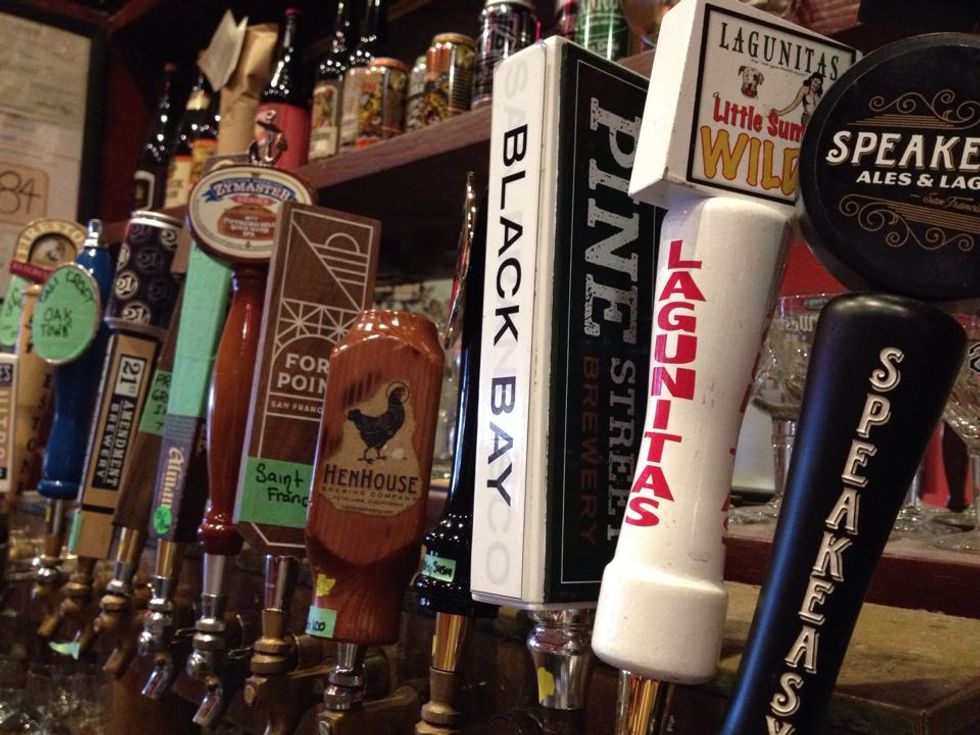 Great beer bars have a lot in common: an excellent selection of reasonably priced craft beer, accessible and knowledgeable staff, the real possibility of a place to sit, a sound level that invites conversation, and the availability of decent food. Great San Francisco beer bars also reflect their neighborhoods; a significant percentage of the regulars live or work in the area and the bar mirrors their identity and values. Read on for our list of the ten best.

10. The Willows – This funky SOMA bar has an excellent rotating selection of rare craft beers well paired with sandwiches, sliders, and big ass burgers. A pool table, along with extensive board and arcade games, enable tipplers to while away the day. Check the web site for tap takeovers and other events.

9. The Beer Hall – This snug upscale Civic Center taproom has 20 rotating beers on draft, all Californians, and mostly from the Bay Area. Beer drinkers wanting more variety can select from over 200 bottled beers, which can either be consumed onsite or as takeout. You can even order beer online. Bonus: small bar bites are available.

8. La Trappe Cafe & Trappist Lounge Restaurant- Brewers are drawn to Belgian beers for the same reason musicians like jazz—there’s a wild and creative freedom in riffing off of the classics. For centuries, Belgians have made arguably the world’s finest beers, and Russian Hills’ resident gastropub, La Trappe, stocks classic Trappist ales and hundreds of other brews. Helpful servers can help you navigate the food and overwhelming beer menu. When in doubt, order the mussels and frites.

7. The Monk's Kettle – An expertly-curated selection of beer matches savory cuisine and a knowledgeable staff willing to help you with both. Your best chance of securing a seat in this Mission gastropub is before the dinner rush, so do yourself a favor; tell your boss you need to get your Boosted Board out of the shop, and leave work early to arrive before 4:00.

6. Mikkeller Bar – Union Square is home to this sleek, 80-seat, Danish-style beerhall. The 42 kegs are stored in one of their two perfectly chilled coolers and are dispensed precisely using the Flux Capacitor, which carbonates each beer at the optimum level of either carbon dioxide or nitrogen. Mikkeller also has an extensive bottle selection. The food menu is meat- and sausage-heavy, all wonderfully selected to pair with the beers. Sour-heads should check out the Tivoli Sour Room.

4. Toronado – This renowned Haight Street Mecca for craft beer has the highest rating of any SF bar on Beer Advocate. Great prices and more than 40 beers on draft, including Pliny the Elder, make this a perfect choice to satiate your inner beer geek. Although Toronado’s bartenders have a reputation for surliness, especially when the bar gets crowded, feel free to ask your neighbors for recommendations, as you can’t swing an empty firkin without hitting a beer expert. There’s no kitchen, but grab a beer and a seat, then go to Rosamunde next door to order an artisan sausage.

3. City Beer Store– It’s nearly impossible to imagine a more extensive craft beer selection than on the shelves in this well-laid-out SOMA location. 15 rotating taps offer a solid set of craft beers and an exceptional collection of rarities in fridge behind the bar, and anything else in the store can be purchased for drinking onsite. City Beer is probably San Francisco’s most sought after venue for craft brewers to showcase their new beers, so check the web site to stay current on what’s coming soon to a glass near you.

2. Hopwater Distribution – Hopwater expertly matches creative high-end pub food with the 31 west coast craft brews they have on tap. Comfortable yet modern, efficient yet relaxed, Hopwater excels at everything. It’s a perfect place to bring out of town beer fans who want to sample a variety of California brews.

1. Amsterdam Café– This Tenderloin treasure attracts local beer fanatics with its low-key and comfy atmosphere as much as its 25 taps and extensive bottle collection of craft beer. It’s an excellent place for a small group to have a relaxed evening over a few craft beers.