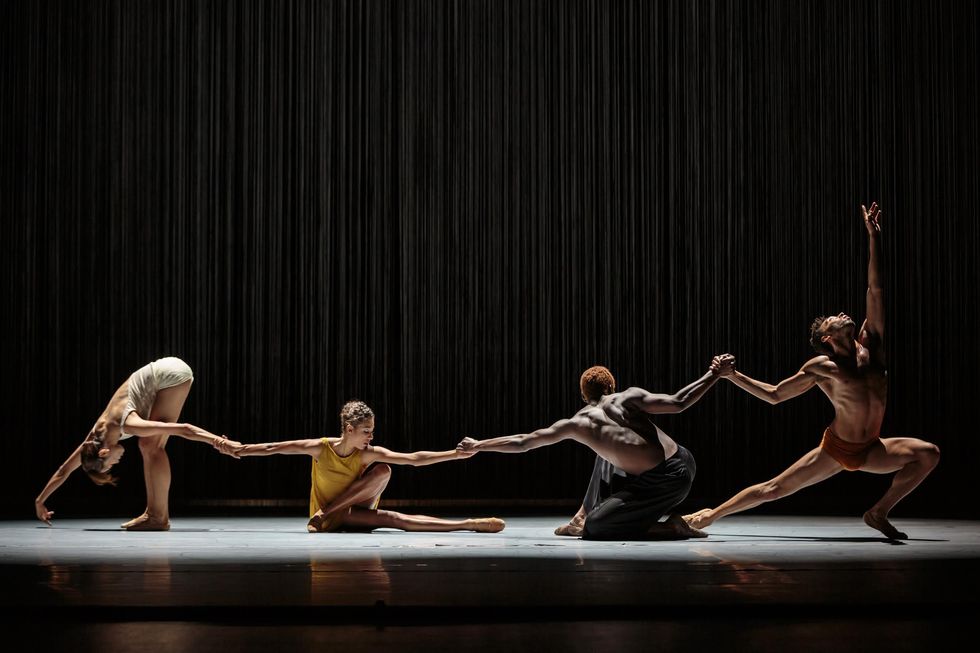 When all the dancers from Lines Ballet aggregate together on the stage, they exude a sort of diamond-like wattage. Standing there in their skimpy and shiny costumes—often unafraid to include eye-catching mesh—one is aware of how much sex and sexiness there is to be found in the modern and contemporary ballet of Alonzo King.

King’s new work, SAND, debuted on Friday, April 21 at the Yerba Buena Center for the Arts. The atmosphere in the lobby felt electric. An air of anticipation buzzing in a crowd that was strikingly diverse—from serene older art patron types and middle-aged couples to the strikingly stylish perched on their weekend, as well as the loner dance fanatics. The San Francisco dance audience, it seems, is having a moment.

I mean, it’s not everyday you go to a dance performance and see someone in the concession line order two freshly baked cookies and a can of IPA to take into the auditorium, and then another IPA to be waiting at intermission; or for that matter experience an elderly man with tufts of hair sprouting out of his ears and sporting a disco shirt from the 70s, deftly wield his four-pronged cane to cut in front of you in line so he could order a sauvignon blanc, all without making even a single second of eye contact.

One of the key drivers of excitement was the fact that King—known for his love of collaboration with artists of other disciplines—would this evening be joined by the music of pianist Jason Moran and saxophonist Charles Lloyd. Moran, with his modernistic tendencies and driving piano technique, and Lloyd with his breathy, nuanced playing would not disappoint. When you’re in the presence of live music, you know it. And though the audience was not made privy to the musicians while they played, you could feel the dancers' energy keying in on the moment. As if they know, since it’s live, that the potential for uncertainty abounds, so they are more attentive than ever. (Note that only this past weekend's ticketholders were treated to live musical performance; all subsequent shows this week will be danced to a recording).

But ultimately, any dance performance rests with the dancers. And the current lineup of talent is, as always, dazzling. The incredibly long and lithe Courtney Henry is just one of the standout performers. And while looming at six feet, her height is undeniable, it would mean nothing if she didn’t extend those Ann Reinking-like limbs and levers in a way that would make Bob Fosse keel over in rapture at the sight of it. Watching her move along the stage, I was struck by what appeared to be an inclination to use her physicality to conjure very brief and passing moments of awkwardness, like a musician suddenly changing a time signature or inserting a dissonant chord. It made for riveting watching: Did I see what I just thought I saw?

“A grain of sand can temporarily blind you … and can halt an engine,” says King in program notes that also allude to its beauty and abundance in the shapes of dunes and the power of deserts. With this, his latest collaboration, it turns out its metaphorical properties are just as potent and timeless.