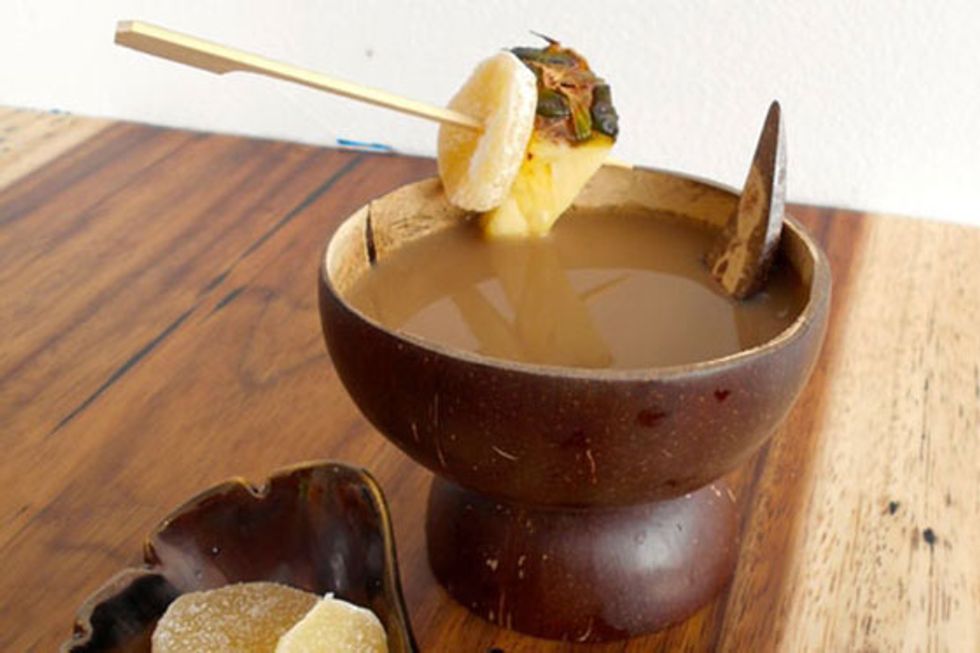 The Polynesian term for cheers — Bula!— isn't commonly heard in San Francisco's restaurant scene, where toasting over a glass of Champagne or even a mug of coffee is the norm. But head down University Avenue in Berkeley, and you'll hear the salutation shouted with gusto over kava-filled coconut mugs inside MeloMelo Kava Bar.

MeloMelo Kava Bar is the first booze and coffee-free bar to hit the Bay Area serving only kava—a murky gray, mood-altering beverage made from the 10-foot roots of the piper methysticum (“intoxicating pepper”) plant native to the South Pacific. Thousands of years before alcohol or coffee dominated society, kava was the beverage of choice for every occasion, and in the South Pacific it's often drunk throughout the day, in large quantities.

Kava culture first crept into the mainland via southern Florida in the early 2000s, but is only now making its way to the West Coast. It's natural benefits are widespread, and the root has been used as everything from a muscle relaxant and pain reliever to a sleep aid and cure for anxiety.

An alternative to the traditional bar scene, MeloMelo offers a trippy, tranquil vibe and calming soporific drinks that promise the opposite of caffeinated jitters or day-after hangovers, but is still open until 12am every night.

“We make our kava significantly stronger [than what you would have in the South Pacific] or people wouldn’t feel the effects of it,” says Nicholas (Nico) Rivard, co-owner of MeloMelo. He and partner Rami Kayali source their kava from the Fiji, Konga and Vanuata islands, grinding the root themselves to ensure its quality.

Check your iPhone at the door if you plan to hang out at Berkeley's newest bar. (Photo courtesy of MeloMelo)

In its first year, MeloMelo has already garnered a cult-like following of locals who come to sit, chat, and bask in the drug-like effects of the natural concoction. Kava is traditionally served in coconut shells called bilos, and MeloMelo offers two options: “low tide” and “high tide,” similar to a single and double shot.

“Traditionally we just knock it back,” says Rivard. “Admittedly, it’s not the tastiest of beverages.”

Within minutes of shooting back a shell, you may feel your tongue and lips go numb courtesy of the active kavalactones in the drink. These initial effects are temporary, but the mellowing result can last much longer.

“It’s not for everyone,” says Rivard, “But I think people appreciate the atmosphere. [It’s] very different from a coffee shop where the energy is really ramped up. Here people are really interacting with each other.”

That organic social interaction is what former barowner Alva Caple also aims to foster at her forthcoming Kava Lounge SF, set to open on Divisadero and McAllister by the end of the month.

“I hope this is going to be a real social place,” says Caple. “An herbal cocktail lounge with a full range of what used to be called elixirs.”

Caple’s kava bar is a bit more spacious than MeloMelo, with a window nook, expansive bar, and elevated lounge. The atmosphere is lush with jungle green walls and a scattering of plants.

Caple believes that Kava Lounge SF will appeal to a broad range of people, including the curious, the health-conscious, and the straight up kava lovers. “Kava is just absolutely wonderful,” he touts. “This [place] is going to be the shit.”