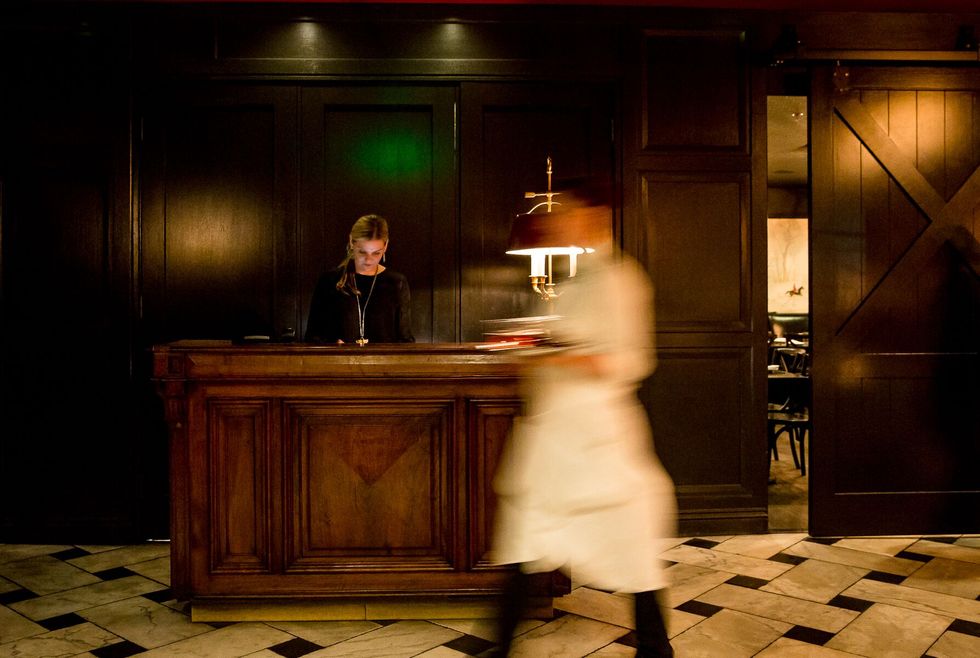 Anna Weinberg is the life of the San Francisco party, as proprietress of Marlowe, Park Tavern, The Cavalier and, coming soon, Leo's Luxury Oyster bar.

If you've had a chance to perch at the bar with Marlowe's burger, devour Park Tavern's deviled eggs during the heady buzz of a Thursday night, or cozy into a booth in The Cavalier's Blue Bar to nosh on lamb scrumpets, you've not only experienced some of the city's most talked-about restaurants (with good reason), but you've likely spotted proprietess Weinberg zipping past, a flash of blonde ponytail with a mouth going a mile a minute, doling out welcome and whip-smart sass in equal measure with a New Zealand accent. Having cut her teeth as a hostess at NYC's Barbuto, Weinberg learned from the best, but has perfected the art of hospitality here in SF as partner in the Big Night Restaurant Group. It seems there's no stopping her.

While Weinberg will steadfastly explain that her success is not without the help of her other partners—her husband, James Nicholas, and chef Jennifer Puccio—she is no doubt the creative force of the crew, a manic dreamer of entertainment in restaurant form with seemingly endless energy. As soon as one restaurant opens, the next idea is swirling in her head. And in true hostess form, the customer is at the core of what motivates Weinberg to push the limits. “I want to do the opposite of what we just did. We need to give our regulars new experiences," she says.

But how the hell does she manage it all? “We have a layer of four or five people we couldn't do without, and part of retention is expansion—we keep our best people engaged and excited with new projects." Their latest creation? Leo's Luxury Oyster Bar, a Mad Men-esque ode to craft cocktails, raw seafood, and opulent luxury opening New Years Eve in the former Wexler's space in the heart of the FiDi. Inspired by an episode from season one, Weinberg takes the sexiest essence of Don Draper getting schnockered at lunch and transforms it into a most anticipated new spot: “I want gorgeous men in suits, drinking martinis and eating oysters at this bar." Yes, please.

While The Cavalier's members only back-room bar, Marianne's—the embodiment of Weinberg's late-night dreams—gives a taste of what makes her tick, Leo's may prove to be the most personal project yet: Named after Nicholas' and Weinberg's cherub of a son, it's an unabashed celebration of the group's favorite things: “Jenn will admit she doesn't eat cooked food. And James is super healthy. More than me, it's the food they love," Weinberg explains.

Though her fondness for rosé and, of course, lots and lots of bubbles, are all over the wine list. Leave it to Weinberg to have a literal Champagne room—a tented space behind the dining room replete with Moroccan tile floors, leather banquettes, and table service pouring everything from Laurent Perrier to a 1980 vintage Krug. “It's not private, but it will feel glamorous," Weinberg affirms. With an interior modeled after a 1950s-era Park Avenue apartment, courtesy of preeminent designers Ken Fulk and Jon de la Cruz, Leo's will have an atrium with hanging ferns, a honey onyx bar, mahogany wood panels, green leather booths, and antique mirrored walls in the dining room. “It's nightlife meets oyster bar," says Weinberg.

And while we probed about what's next, she'll tell you that right now, “The plan is to make Leo's great." That said, we're betting she'll have something else in the hopper come January 1. // marlowesf.com