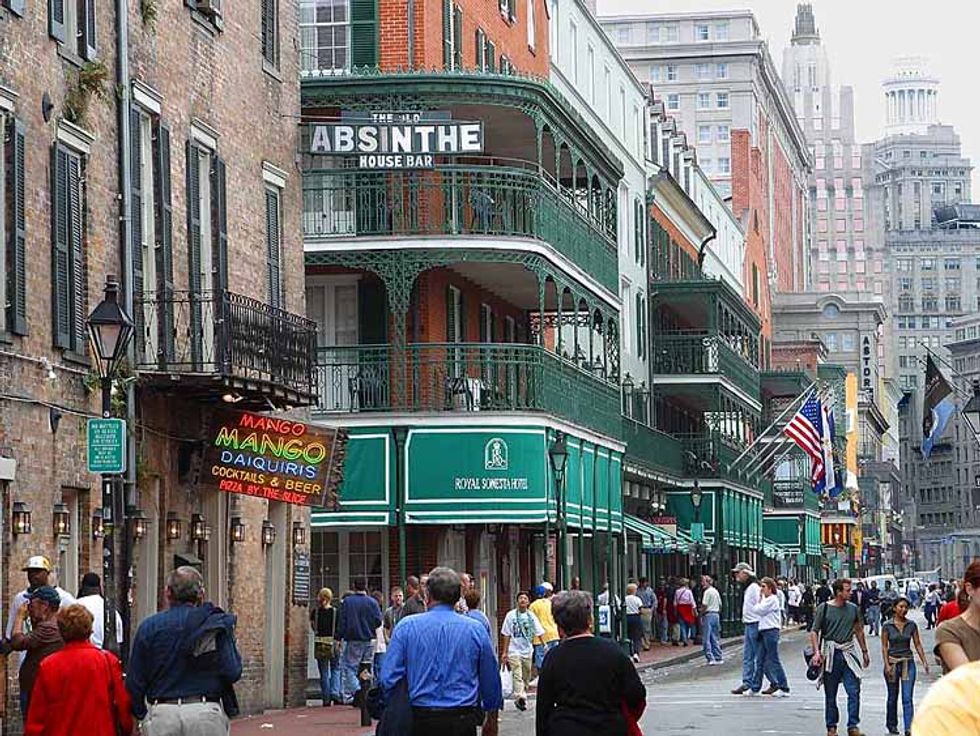 Ever wanted to rub elbows with a TV icon? I Dream of Jeannie star Barbara Eden, who wore the Miss San Francisco crown in 1951, will receive a homecoming fit for a queen this Sunday at the Castro. The evening's entertainment will include an on-stage interview with Eden, a Jeannie Look-A-Like Contest, a career highlight reel, performances by the Garden of Eden Belly Dancing Superstars, and a special screen surprise. Following those festivities, Eden will host an autograph and book signing.For tickets, click here. Elsewhere:

1. The Big Uneasy
Where: Roxie Theater, 3117 16th St., 415-863-1087
When: July 10-11
Why: Was Hurricane Katrina's destruction of New Orleans a natural disaster or an epic failing of the U.S. Army's engineering corps, the group responsible for building and maintaining levees sturdy enough to protect a once-densely populated metropolis? It's not really open to debate. Here, Harry Shearer (This Is Spinal Tap, The Simpsons) calls on academics and Hollywood friends (John Goodman, Brad Pitt) to build a powerful, infuriating case against those most responsible for the profound mishandling a preventable crisis.

2. Gremlins
Where:Castro Theatre, 429 Castro St., 415-621-6120
When: July 8
Why: Usher in the holiday season early with Joe Dante's 1984 B-movie classic, in which a working-class town, straight out of a Norman Rockwell painting, is overrun by mischievous ghouls with Christmas fast approaching. Along with Steven Spielberg's Indiana Jones and the Temple of Doom, Gremlins was considered graphic enough by the MPAA to prompt the introduction of a new rating: PG-13, given later that year for the first time to Red Dawn. Yet for all its gore, Gremlins is a sly, gleefully subversive satire, a comedy with razor-sharp edge.

3. Vincent Wants to Sea
Where: Lumiere Theatre, 1572 California St., 415-885-3201
When: All Week
Why: Crushed by his mother's death and shipped off to a clinic by his distant dad, Vincent (Florian David Fitz), a Tourette's Syndrome sufferer, resolves to spread his mom's ashes over the Mediterranean Sea. Joined by a pot-smoking anorexic (Karoline Herfurth) and an obsessive-compulsive (Johannes Allmayer) partial to stolen luxury cars and Bach, Vincent hits the autobahn and heads for the coast, setting up a road trip that mines his story for diverting drama and low-key laughs.

4. Page One: Inside the New York Times
Where:Bridge Theatre, 3010 Geary Blvd., 415-751-3213
When: All Week
Why:Page One delivers unprecedented access to the Gray Lady's newsroom at a time when the Internet, having surpassed print as our main news source, is accelerating the decline of newspapers across the nation and fundamentally transforming the media landscape. Writers, including Tim Arango, Brian Stelter and David Carr, track the industry's metamorphosis even as their own paper struggles to stay solvent, in an illuminating portrait of journalists struggling to produce extraordinary work under difficult circumstances.

5. Buck
Where: Embarcadero Center Cinema, 1 Embarcadero Ctr., 415-352-0835
When: All Week
Why: "Your horse is a mirror to your soul, and sometimes you may not like what you see. Sometimes, you will." So says Buck Brannaman, an American cowboy who travels the country for nine months a year helping horses with people problems. Buck, Cindy Meehl's richly textured documentary about an ordinary man who's overcome tremendous odds to lead an extraordinary life, follows Brannaman from his troubled childhood to his successful career as a real-life "horse whisperer."

6. The Trip
Where: Clay Theatre, 2261 Fillmore St., 415-346-1124
When: All Week
Why: When Steve Coogan is invited to tour the finest restaurants in England's Lake District, he envisions a perfect getaway with his girlfriend (Margo Stilley). When she backs out, he has no one to accompany him but his best friend and source of eternal aggravation, Rob Brydon. As the comic duo drive each other mad with constant competitions and dueling impressions of Michael Caine, Sean Connery and Al Pacino, they arrive at unexpected realizations about food, the nature of fame and their own lives.

7. Conan O'Brien Can't Stop
Where: Lumiere Theatre, 1572 California St., 415-885-3201
When: All Week
Why: Conan O'Brien Can’t Stop is a snapshot of a performer on the rebound, taken at a very specific, precarious moment. It’s not always funny – director Rodman Flender (Leprechaun 2) highlights the former Tonight Show host’s musical excursions more than his comedy – and it’s not always pretty, but for the Coco-nuts of the world, it’s at least more intimate and honest than anything they’re likely to find on basic cable.