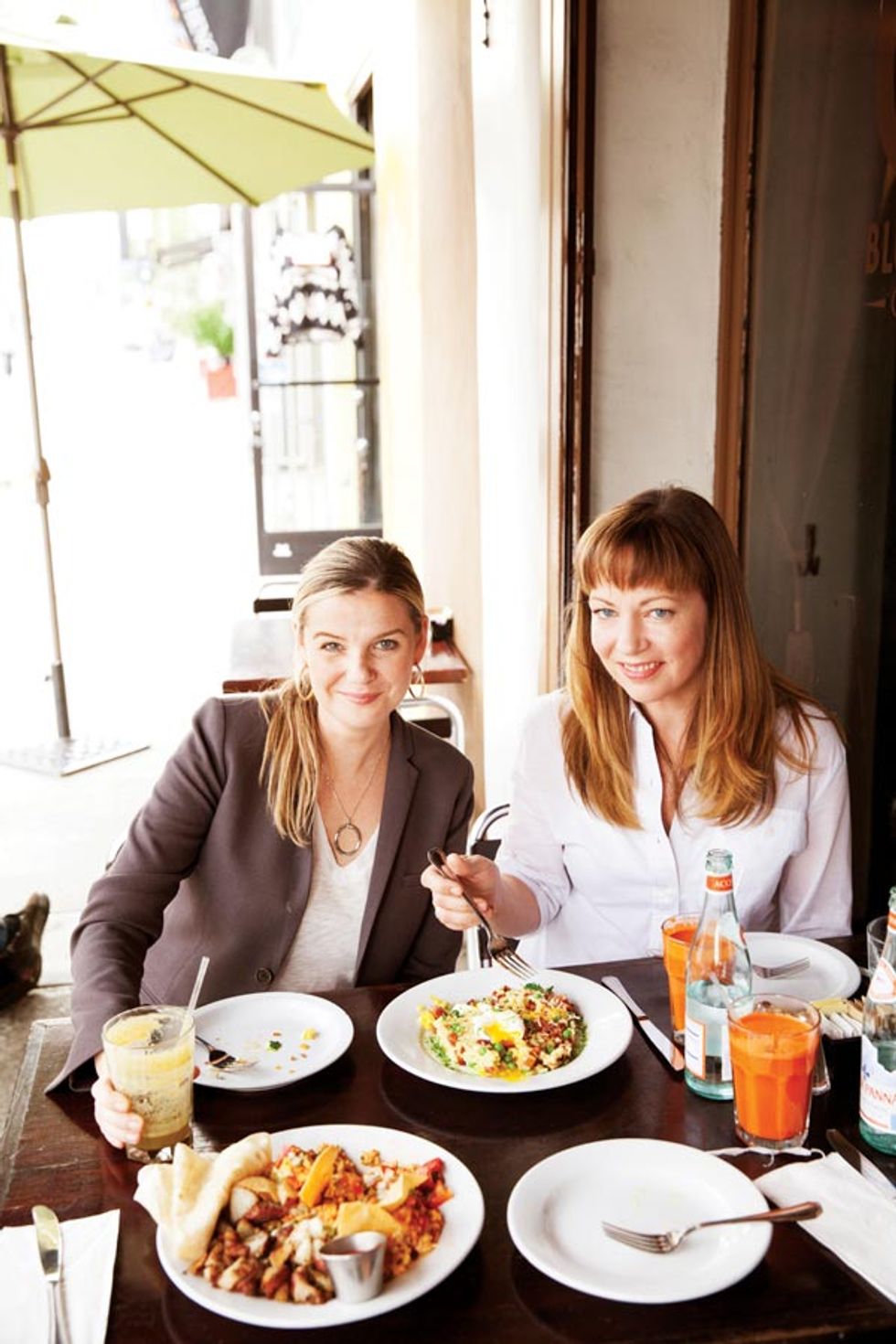 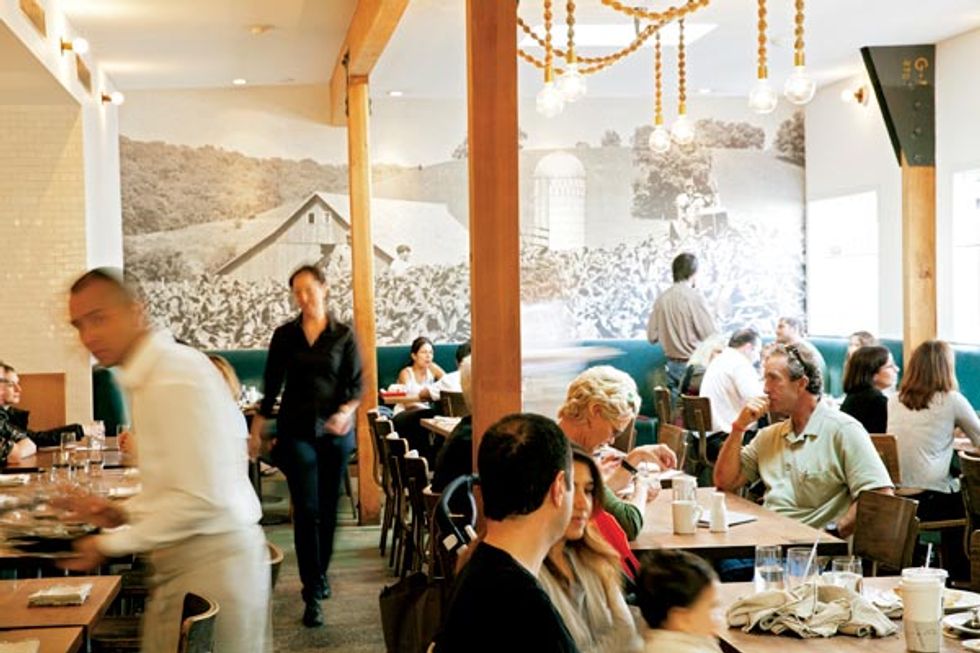 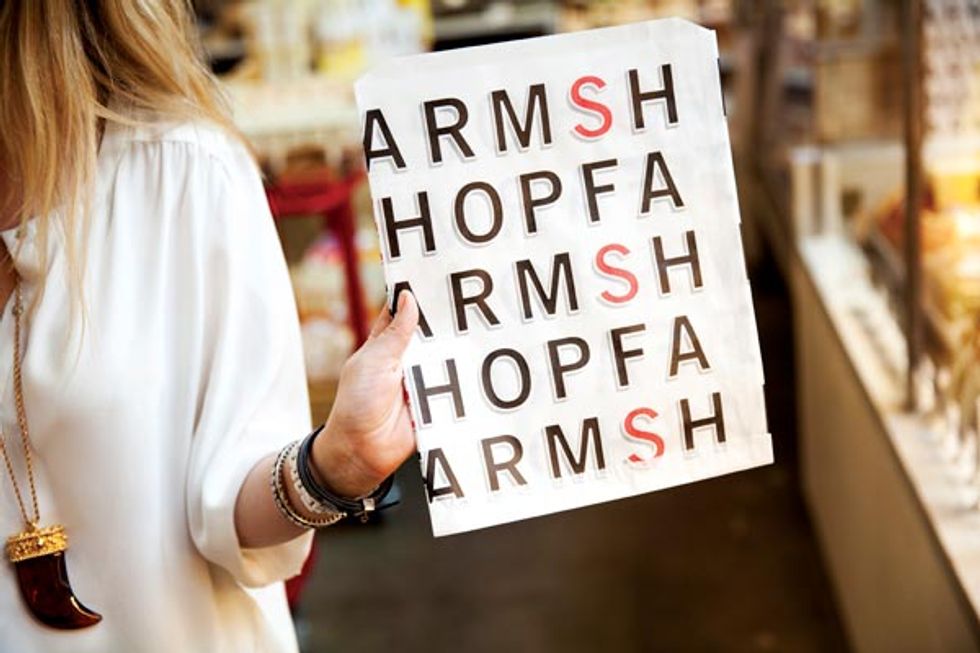 Previous Next
Look for a riff on Farmshop’s expert branding at Weinberg and Puccio’s new market concept, currently in the works. 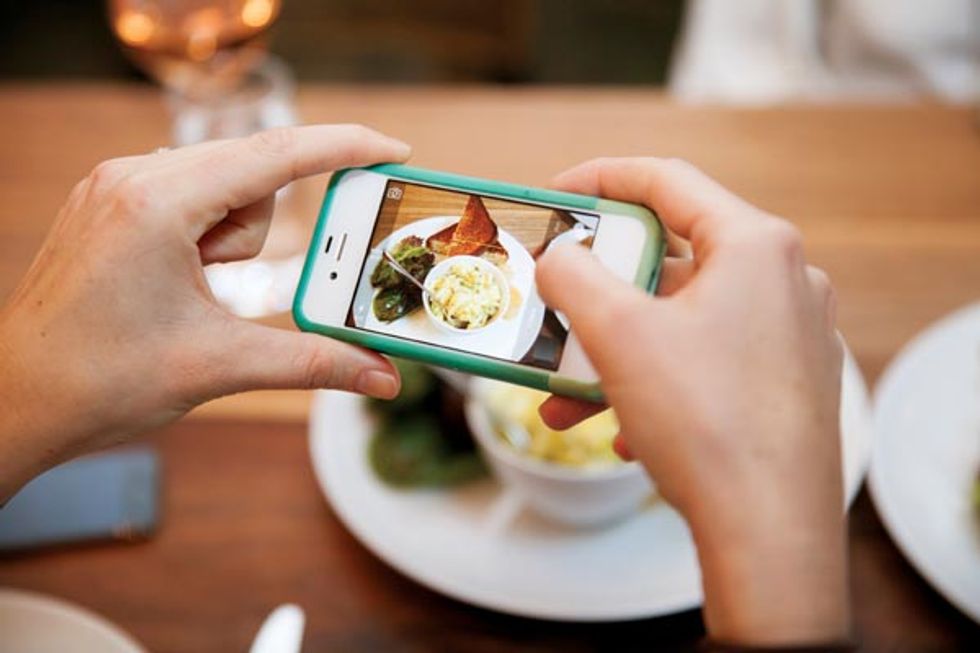 Previous Next
The author was tasked with rule number four: photographing each dish to track our digestive journey. 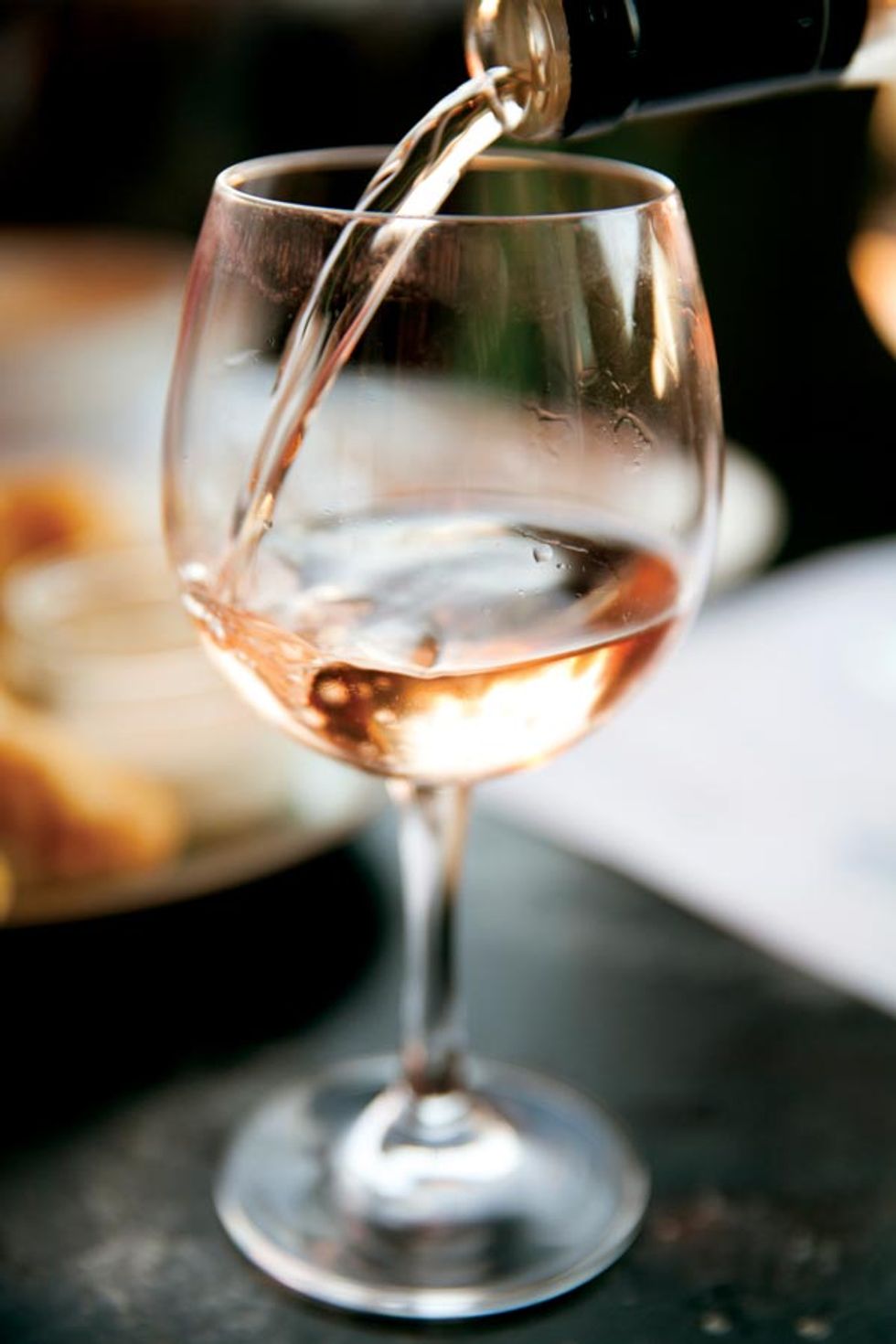 Previous Next
Research was done through rosé-colored glasses, and the 2012 Chateau de Roquefort Rosé “Grêle” at Son of a Gun. 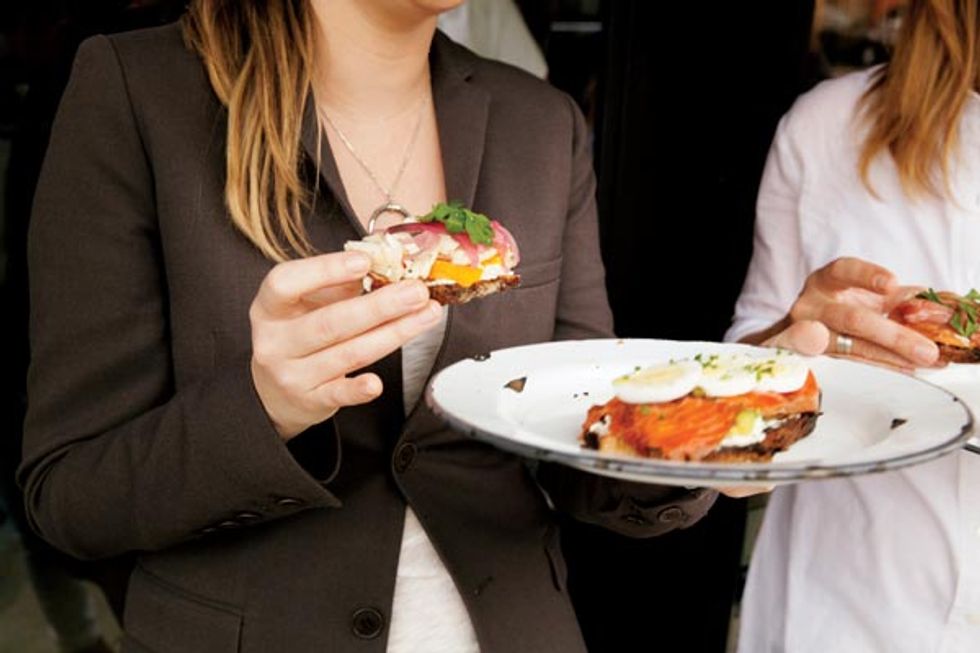 Previous Next
Toast—topped with avocado and radish and salmon, egg, and pickle—becomes a rite of passage for any Venice resident. 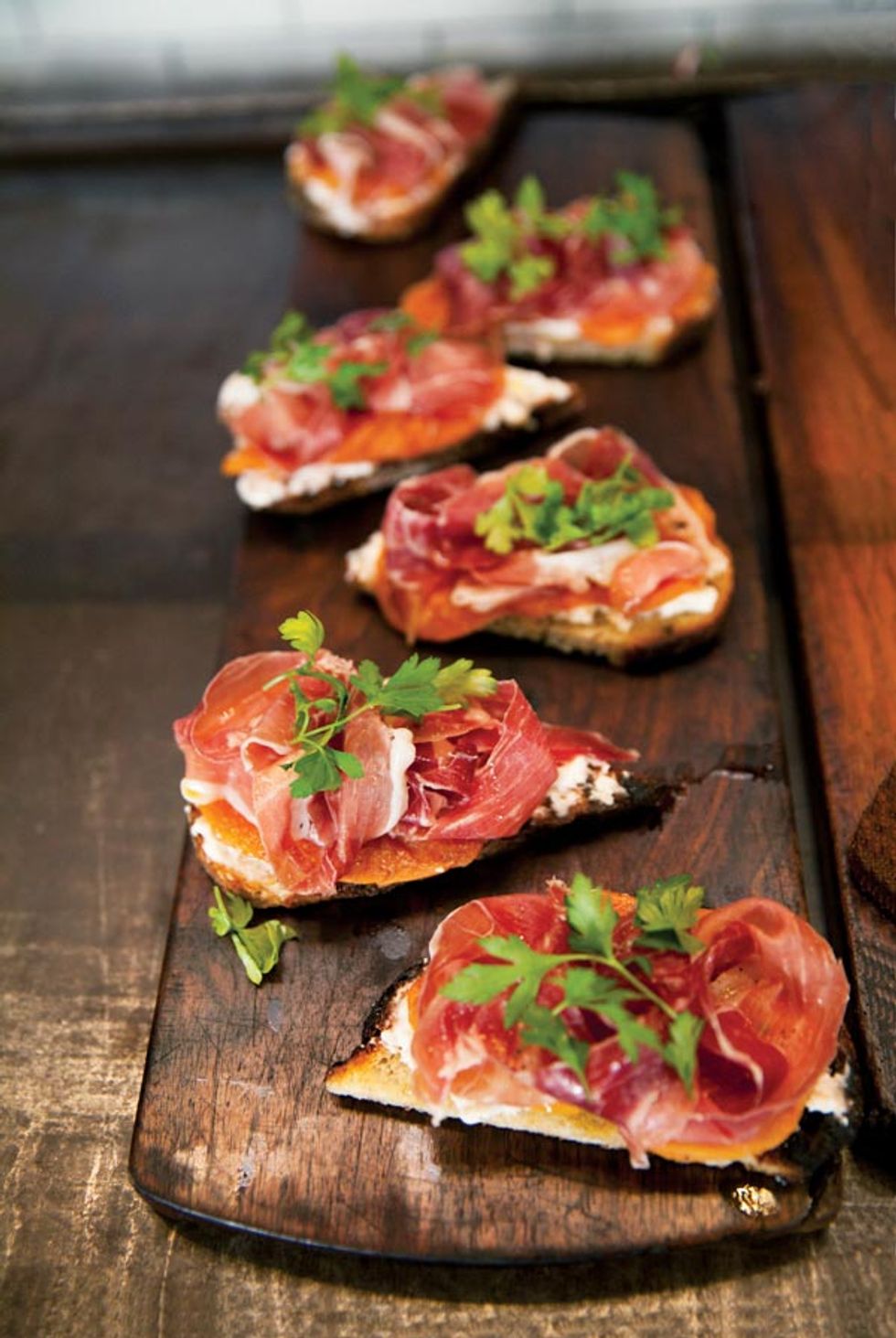 Previous Next
Breakfast toast is redefined with prosciutto atop persimmon and burrata at Gjelina Take Away, the Abbot Kinney to-go counter. 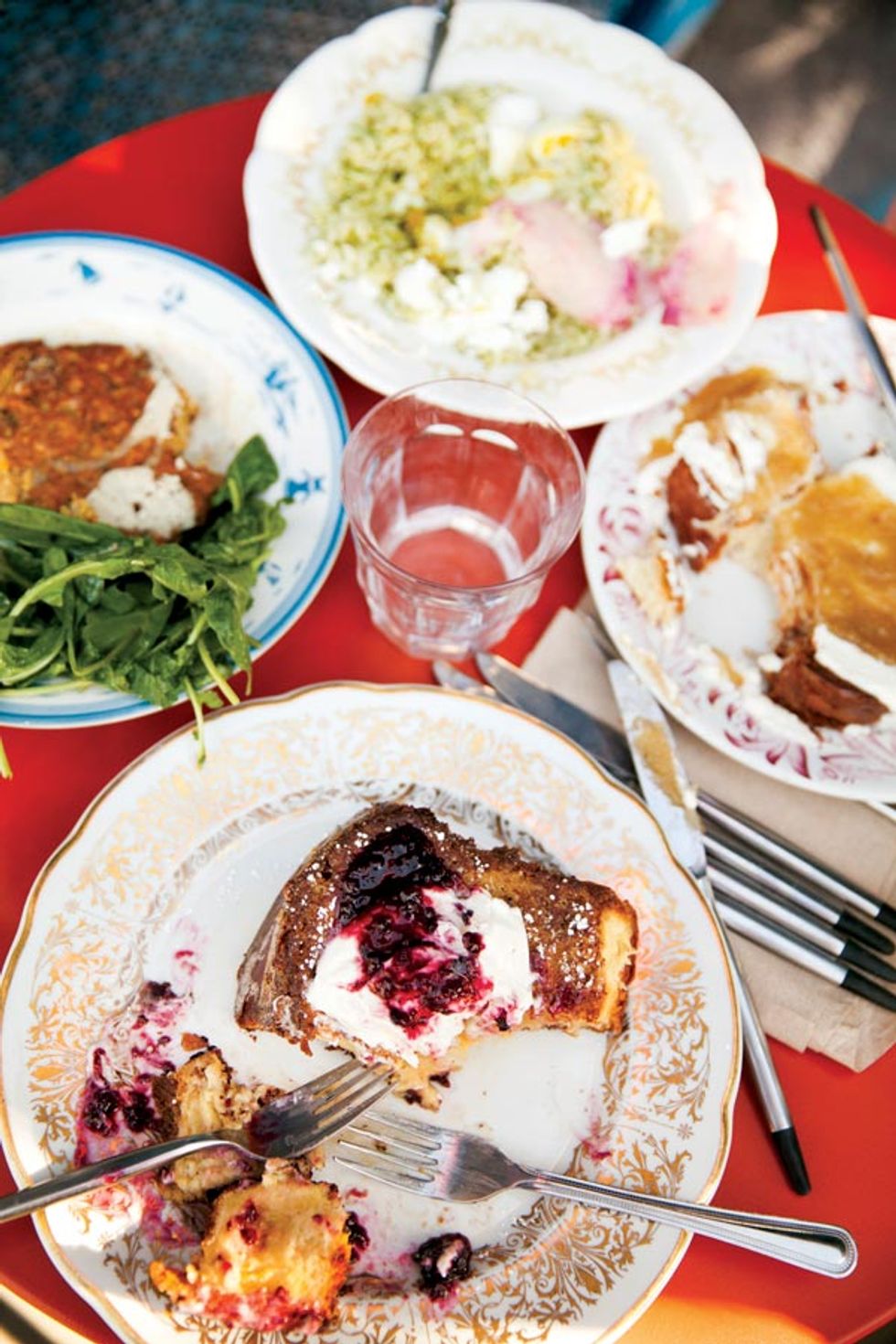 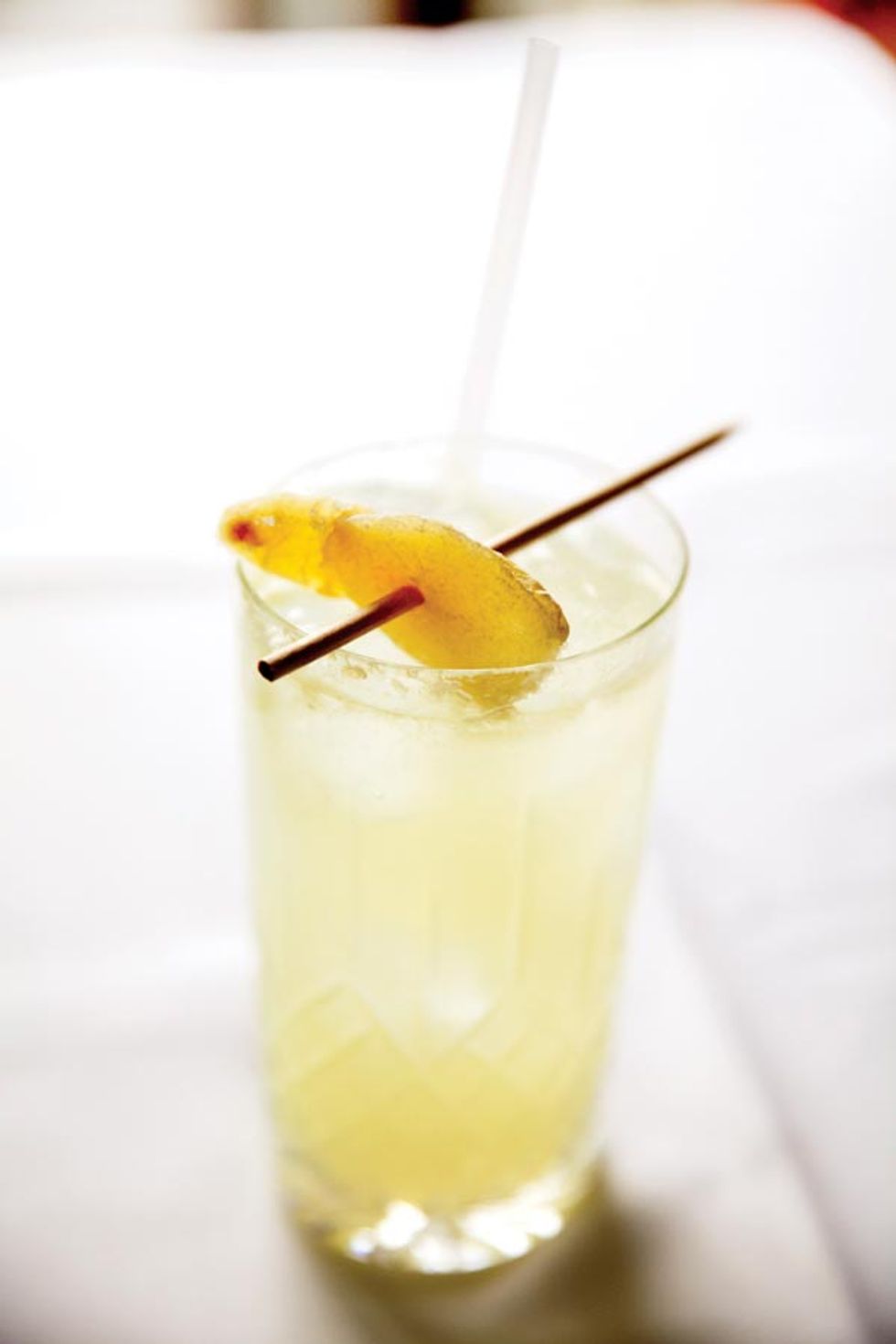 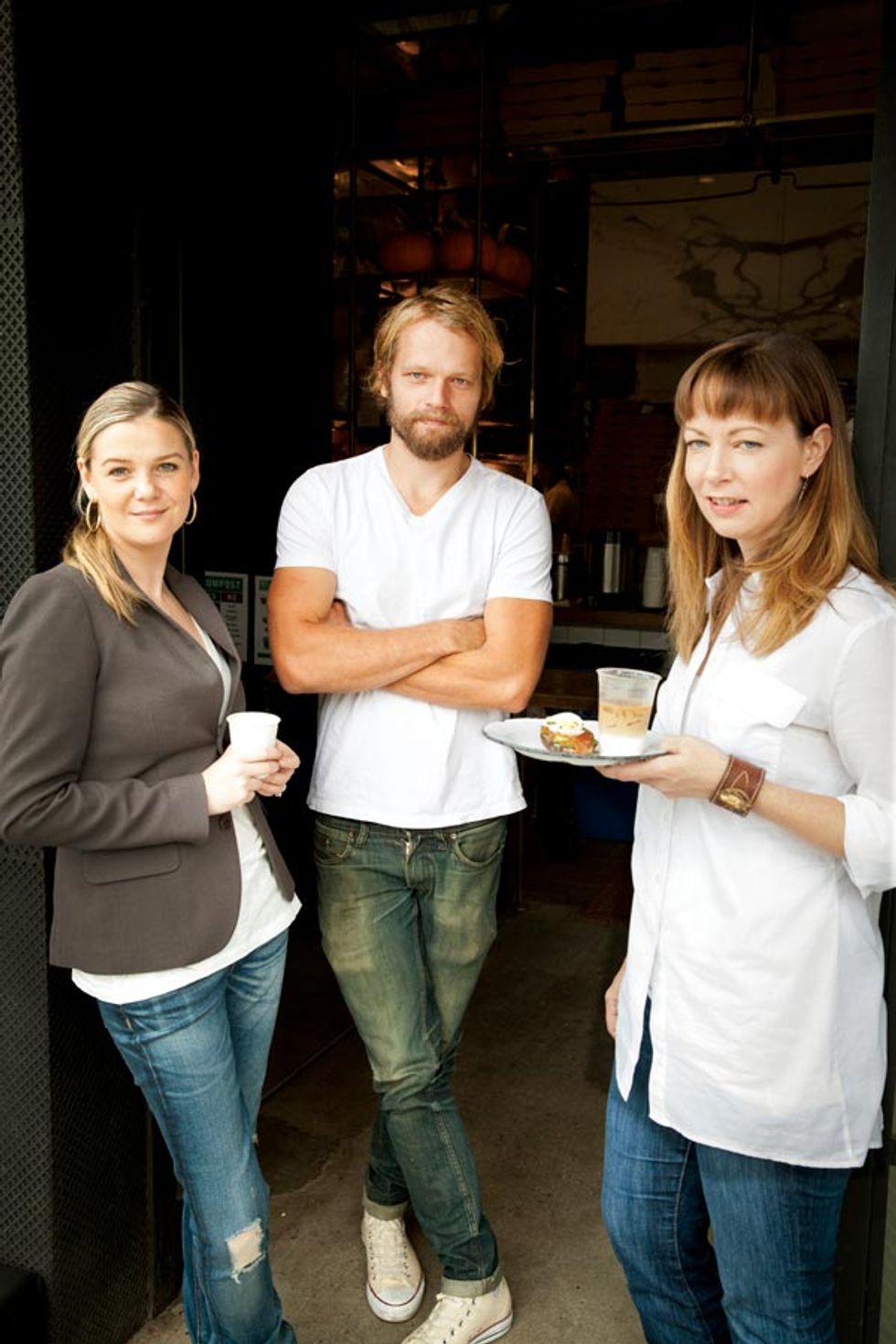 Previous Next
Weinberg and Puccio chat with chef Travis Lett at his neighborhood hit, Gjelina Take Away. 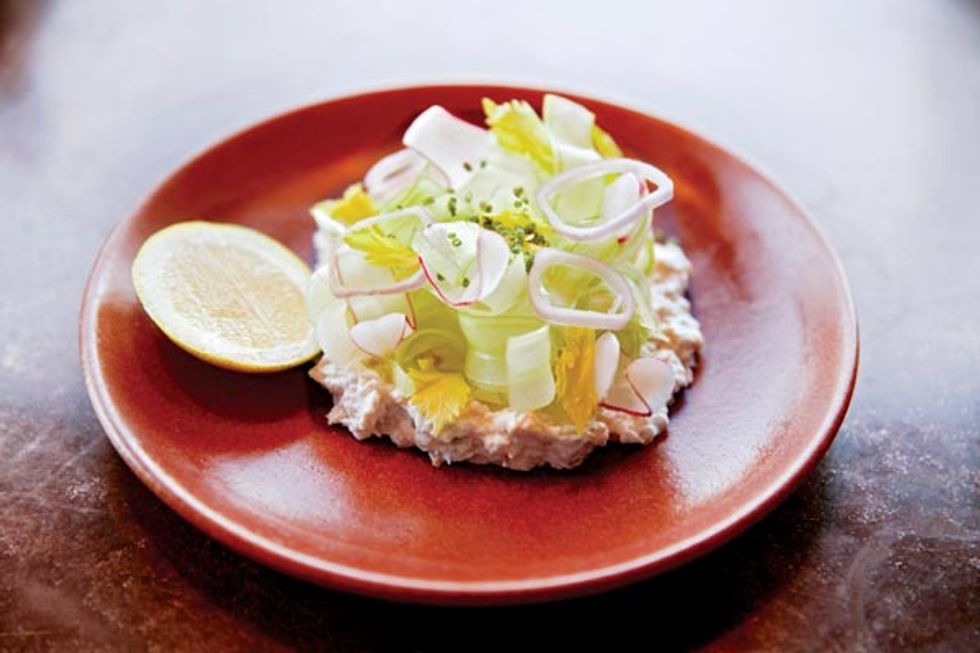 Previous Next
Smoked mahi fish dip at Son of a Gun, brightened with celery and radish, reminded Puccio of “east coast-style” dishes. 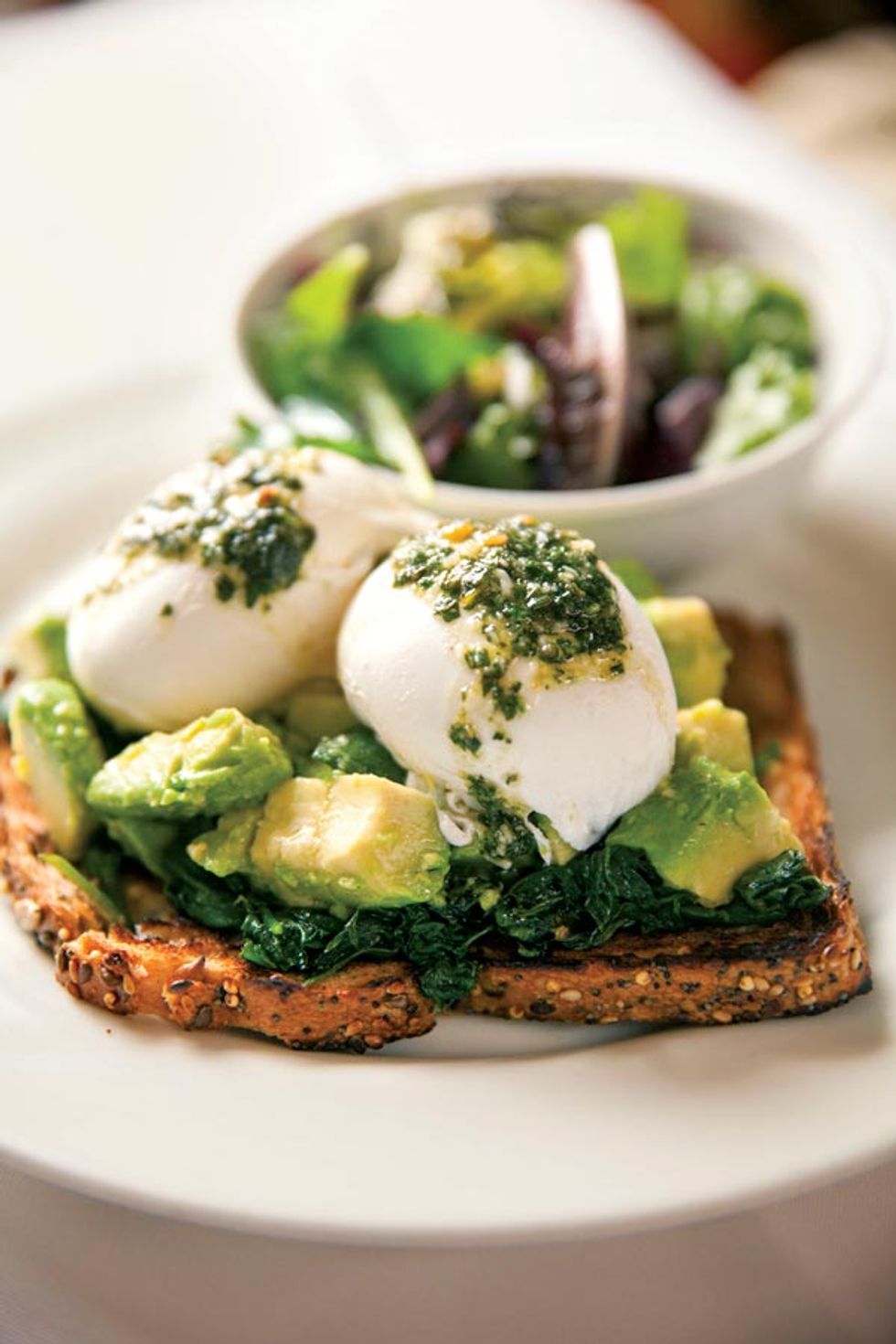 Previous Next
A variation of Cecconi’s green eggs (poached, with avocado and pesto) is likely to appear on the new brunch menu at Marlowe.

When restaurateurs Anna Weinberg and Jennifer Puccio invite you for a weekend tour of the Los Angeles food scene, you say yes. And so we did. Twenty-seven eggs were cracked, and countless new restaurant ideas were hatched. Here’s what happened. (And yes, it was delicious.)

Dainty, nibbling ladies who lunch can’t hold a toast point to the likes of Anna Weinberg and chef-partner Jennifer Puccio, the restaurant “fempire” builders who, when off the clock and eating out, unabashedly order up a storm and fill entire tables with their exploits, bludgeoning each dish with a single stab, leaving a tableau of petrified plates in their wake. The women behind Marlowe, Park Tavern, and, most recently, The Cavalier opened each of their wildly popular restaurants on the heels of intense R&D excursions. It’s all in a few days’ work for these two. But for me, this three-day trip to Los Angeles—which requires we eat very well and drink copious amounts of rosé—is a dream gig. Seriously, pinch me.

What began as an off-the-cuff invite over cocktails with Weinberg quickly became an excuse for a girls’ trip. After The Cavalier received a glowing review from the San Francisco Chronicle, the little adventure became a serious mission. The goal: to fine-tune breakfast and lunch at the city’s only three-star, all-day restaurant.

Both East Coast expats and SoMa residents, Weinberg (a New Zealander turned New Yorker) and Puccio (a New Hampshire native) have serendipity working for them. When they met in 2008, each woman’s career was vulnerable. Weinberg was admitting defeat for her first and only SF miss, South, the New Zealand–style restaurant in the space that would later become Marlowe. And Puccio, then the executive chef at Cortez, couldn’t keep the Tenderloin’s Cal-Med restaurant afloat despite all her talent. She signed on to helm the stoves during South’s last few months and the two quickly cemented an alliance. “It felt really organic,” says Weinberg. The duo, along with Weinberg’s husband, James Nicholas, opened Marlowe on Valentine’s Day in 2009.

Around that time, the women took their first R&D trip in search of the Marlowe burger. We all know how that story goes—the burger regularly tops SF’s “best” lists and is known to be the favorite of Chronicle critic Michael Bauer. “These trips are so important,” says Weinberg, who notes that the time away (at least twice yearly) results in their most inspired ideas. It may be fun, but it’s all business: “We’ve trained ourselves; we’re not dealing with any other issues. We’re focused and we’re talking about the future,” she says with characteristic purpose.

Once in LA, our first stop is Farmshop, the Brentwood Country Mart mainstay, which recently opened a Larkspur location. As the first bottle of Robert Sinskey vin gris of pinot noir tumbles into our glasses, the brainstorming begins. Weinberg is a blonde ball of energy, plucking clues from everything—a black-and-white mural and a particularly brilliant bath- room gain her praise—while Puccio nods in approval. Weinberg rattles off ideas, mentally renovating their existing restaurants and beginning to build a vision for a new project as yet to be divulged.

We ponder the possibilities until the food arrives, when business makes way for sheer bliss. A deconstructed egg salad sandwich lands on the table to oohs and ahhs. After a moment to marvel at its novelty, the forks swoop in, yielding bites of supple farm egg flecked with capers, sweated spinach, and dill; inches-thick brioche; and tangy heirloom beets. Conversation moves from landlords and sustainable practices to salmon rillettes that are “straight up Cavalier alley.” And then we discover our common obsession with toast. “Anything could happen on toast,” says Weinberg. “Toast is the Vegas of the food world,” adds Puccio. “I’m going to have some more brioche,” Weinberg mutters, reaching across the table. “You will regret this,” Puccio says, deadpan. It’s at this moment that I’m educated in “The Rules” (see below). (No one can’t get away with an extra bite of anything without a sidelong look from Puccio.) “‘Every day begins with rosé,’ should be a rule…but it’s not,” Weinberg adds, sending us into peals of laughter as we dip into speck ham risotto fritters, a Dungeness crab cake sandwich, piquant pumpkin hummus, and Scottish salmon topped with green tapenade.

1. No alcohol before you wake up.

2. Take just one bite of everything (unless Puccio deems it necessary to explore further).

3. You're not allowed to order what you want. It has to be purposeful.

5. At the last meal of the trip, there are no rules.

Despite having a detailed itinerary prepared by friend and mentor Jonathan Waxman, whom Weinberg once worked for as maître d’ at New York City’s Barbuto, these women were bound to go rogue, squeezing in more stops between meals. With the help of Uber, we navigate from poached eggs poolside at the Viceroy Santa Monica, to open-faced toasts at Venice’s Gjelina Take Away, to power brunch at West Hollywood’s Cecconis, guided as much by proximity as word-of-mouth suggestions. Nancy Silverton (of Osteria Mozza and Pizzeria Mozza) urges us to fit in Sqirl, a popular brunch spot on the edge of Silver Lake, to our ultimate pleasure. It’s become clear after overindulging in pear butter–stuffed French toast and a mind-bending breakfast rice bowl that Rule #2 is more of a guideline than a hard-and-fast rule.

Over dinner on our last night, at Hollywood hipster spot Animal (a must-hit on Puccio’s list), I dig into the motivation behind what makes the fempire. “Our egos are strong,” Puccio says with a sly smile, “but our common goal is stronger. Our restaurants are about great food, great service, and awesome atmosphere. If we deliver that, then we’ll keep doing it.”

It is a well-honed vision (not to mention an intensely loyal staff) that differentiates their restaurants. And these trips have much to do with it. “The more we’re blessed and privileged to have San Franciscans like to eat at our restaurants, the bigger we dream,” adds Weinberg. “So we go away and we start talking about things like they’re real. By the time we come back, they have to happen—because we’re so excited.”

But all would be for naught without Nicholas, the business mind behind the scenes. “What makes our partnership so special is that we have total trust in each other to operate our respective areas of each restaurant venture,” he tells me later. “Anna, chef Jenn, and I complete each other. It’s a formidable combination.” Adds Weinberg, “He makes it sustainable. I make it happy. And [Jenn] makes it great.”

“So what do you think?” I ask, somewhat rhetorically, as we take our last postprandial ride. We’re on our way to LAX, following a thankfully light, seaworthy meal at Son of a Gun in Beverly Grove. “Well, I feel a little bit sick,” laughs Weinberg. It seems 82 dishes at 12 restaurants in just two-and-a-half days can take their toll even on the most ironclad stomach. But Weinberg and Puccio were equally stuffed with inspiration. This quest for the best breakfast launched not only the idea for brunch at Marlowe (service begins this spring) but the potential for two new restaurants, as well as a new market concept. At press time, the details were top secret. All Weinberg will say is, “I’m itching, I’m so excited!”