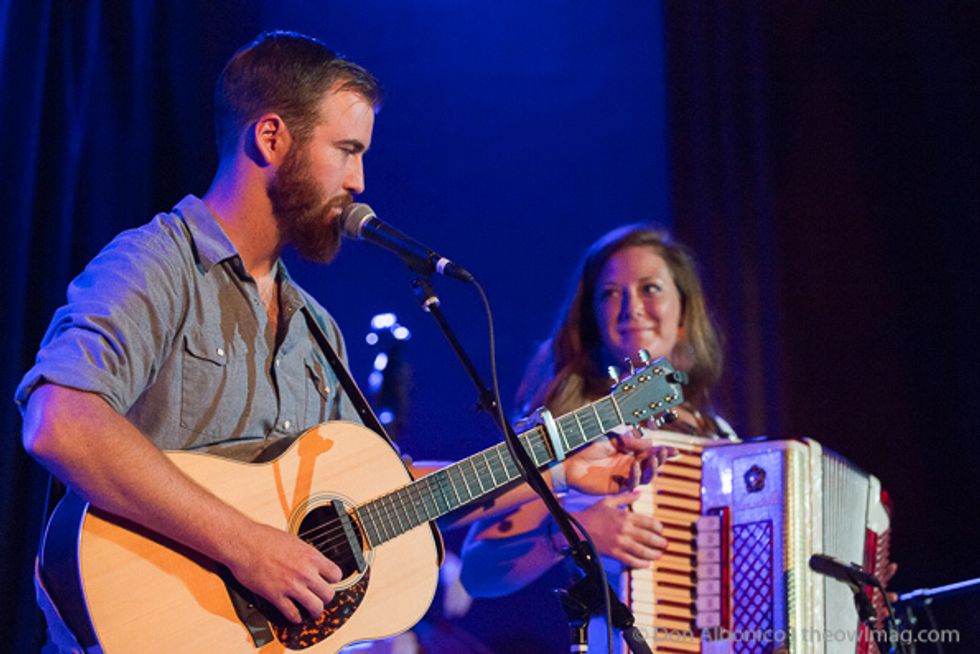 Last week, someone in the Mission posted this on a lamp post: “Call it Frisco / January 29th." I hope they're trying to make an SF/disco pun, but it will probably be a protest. Either way, I'm bringing some disco music.

Genre-bending British band The Go! Team are touring America for the first time in five years, in support of their 2015 album The Scene Between, which recaptures the brilliant patchwork of their 2004 album Thunder, Lightning, Strike. As Pitchfork notes, band leader Ian Parton “has gone back to his original method of composing, recording and producing all of the music himself, save for the vocals, which means he’s purposefully inviting comparisons to Thunder, Lightning, Strike.” Go back and listen to that album, easily one of the most evocative works of the last 15 years. Then get on Scene Between (below). Then go to Great American and see the insanity of their live show. // Monday, January 18, 7pm. 859 O'Farrell Street (Tenderloin); $18, Get tickets here

Monday and Tuesday: Ty Segall and the Muggers at The Fillmore

When does Ty Segall sleep? It seems like the barely 28-year-old is touring and/or recording albums ALL THE TIME. He’s set to release yet another album, Emotional Mugger, on January 22, his 11th under his own name. (Listen to it early on NPR.)  Ty, take a nap so I can not feel lazy for a second.

Catch him with garage rock dudes of Fuzz and Mikail Cronin this week at the Fillmore. // Monday, January 18, 8pm. 1805 Geary Blvd (Western Addition); Get tickets here.

There’s not much more to say about Van Morrison, but there's always something to say about Liam Neeson. The cult hero recently revealed that his late wife serenaded him with Van Morrison at their wedding. The Irish News has the details: “His late wife Natasha Richardson took secret singing lessons so she could serenade the Irish star at the couple's 1994 wedding.” This is basically a reminder that Van Morrison should be on every wedding playlist for the rest of eternity. // // Monday, January 18 - Wednesday, January 20, 8pm. 1807 Telegraph Ave (Oakland); Get tickets here.

We're not sure why Lupe Fiasco is calling this the “Tour for the Fans,” since it seems to be a mutually beneficial arrangement (though tickets will only cost $30-40!). The beloved Chicago hip-hop star usually tells it like it is, but we do hope his recent intimation to the Portland Mercury that he’ll quit rap entirely after this year is all fabrication. // Wednesday, January 20, 8pm. 444 Jessie St (SoMa); $40, Get tickets here.

Meet the best local artist you haven’t heard of: Andrew Blair. You may have heard of his wondrous, soulful folk-meets-Americana band, We Became Owls, and if you haven’t, you're behind. Blair teams up with friend Ross Warner, and Erma Kyriakos will play with her string quartet for this gig at the Lost Church, one of the city’s most charming venues. // 65 Capp Street (Mission); $10, Get tickets here.

Friday and Saturday: The Wood Brothers at The Fillmore

More folk, folks! But the Wood Brothers do folk differently than most, especially these days. Chris Wood plucks an upright bass while brother Oliver shifts between electric and acoustic guitars. The brothers are currently touring in support of a new album, Paradise, which leans more electric than past efforts. We'll call it rock-folk rather than folk-rock. // Friday, January 22- Saturday, January 23, 9pm. 1805 Geary Blvd (Western Addition); Get tickets here.