7x7 editor at large David Lytle and local photographer Guru Khalsa headed to Dolores Park early on Saturday morning during Pride weekend to check out the crowd and get the skinny during a gloriously warm and sunny afternoon. See some of the fabulous people they met.

All photography by Guru Khalsa. 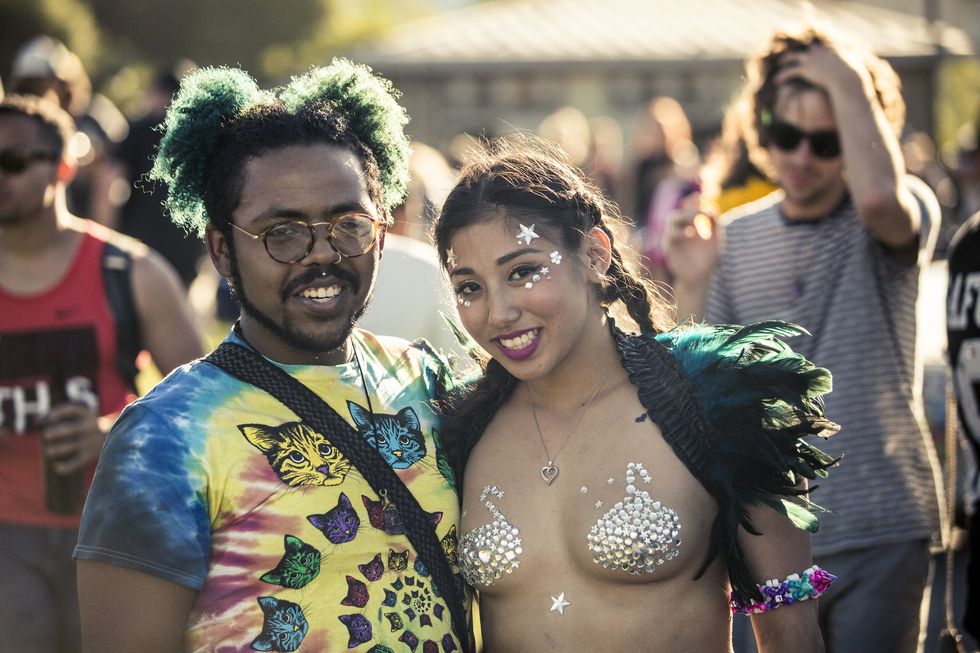 LA-born Dhollii, 21, and, Mission native Lana Pantoja, 23, brought the color and the bling to this year's Dyke March. "I got this shirt at Wal-Mart. Hey, when you see a good tee-shirt, you buy it, right?" said Dhollii. (Guru Khalsa) 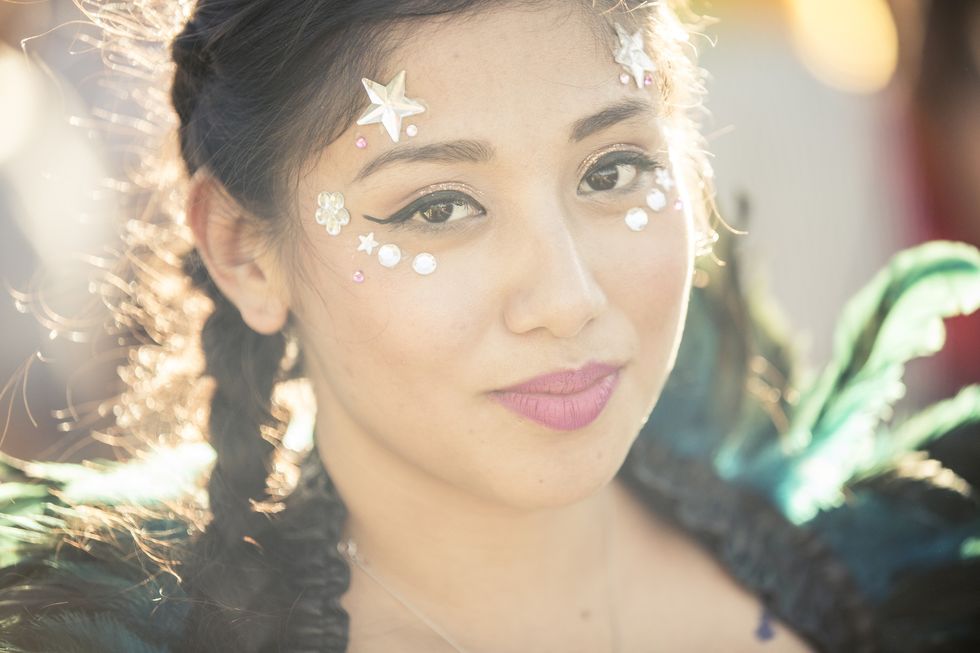 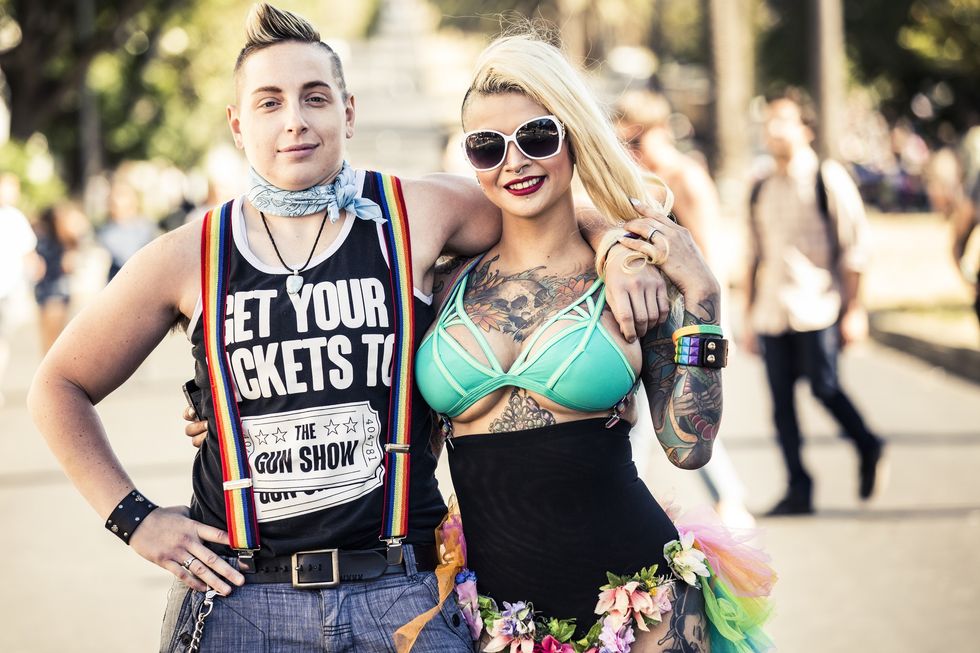 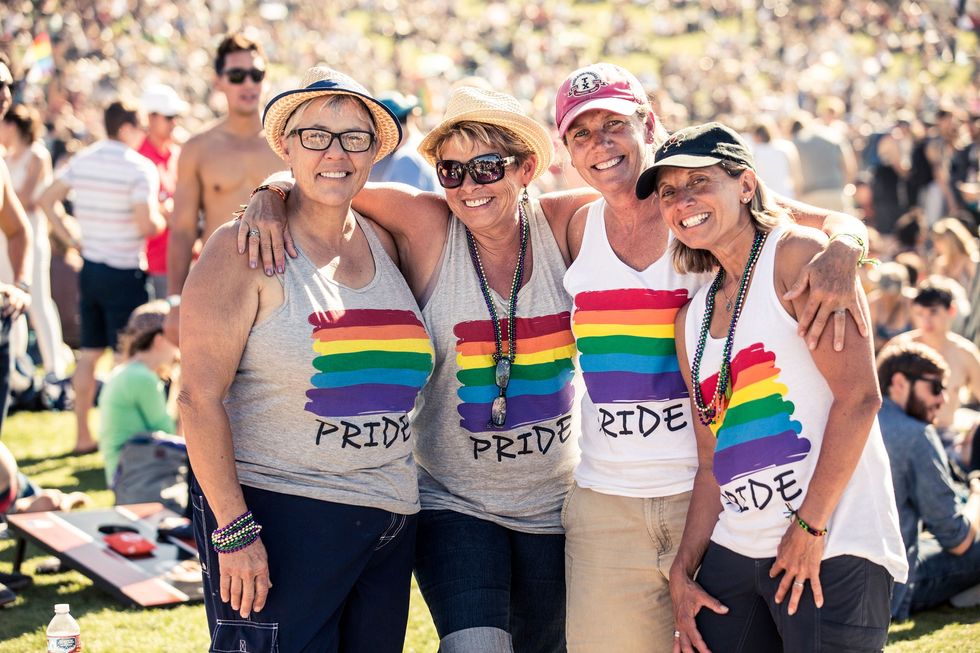 Susan Reyes, 60, Laurie Jones, 63, Elizabeth Wright, 51, and Karen Sargent, 52, all from the Bay Area, after several tequila-dosed jello shots agreed that they've been attending the event for at least 30 years. (Guru Khalsa) 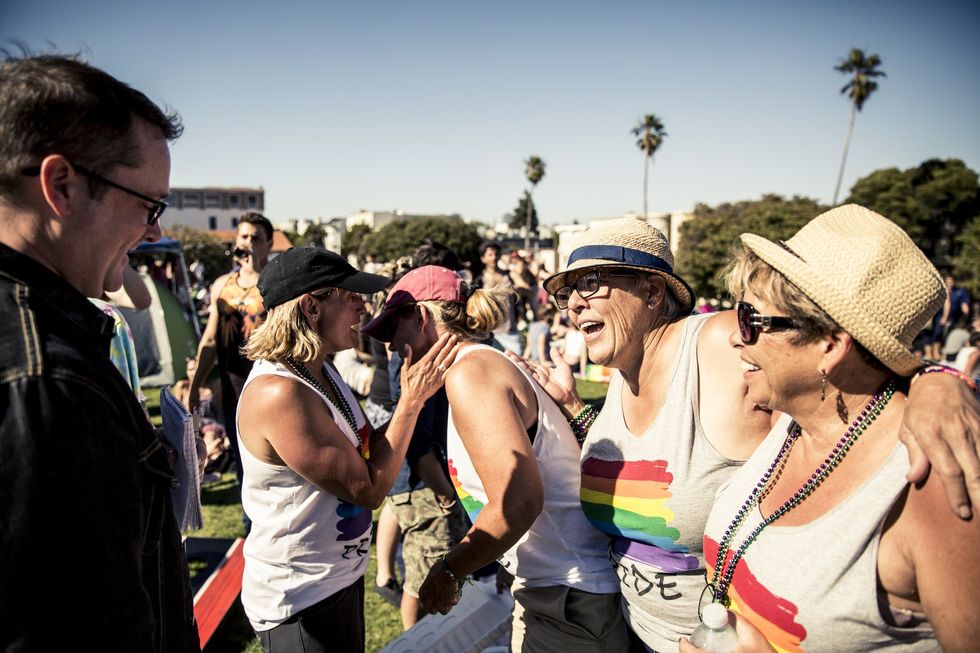 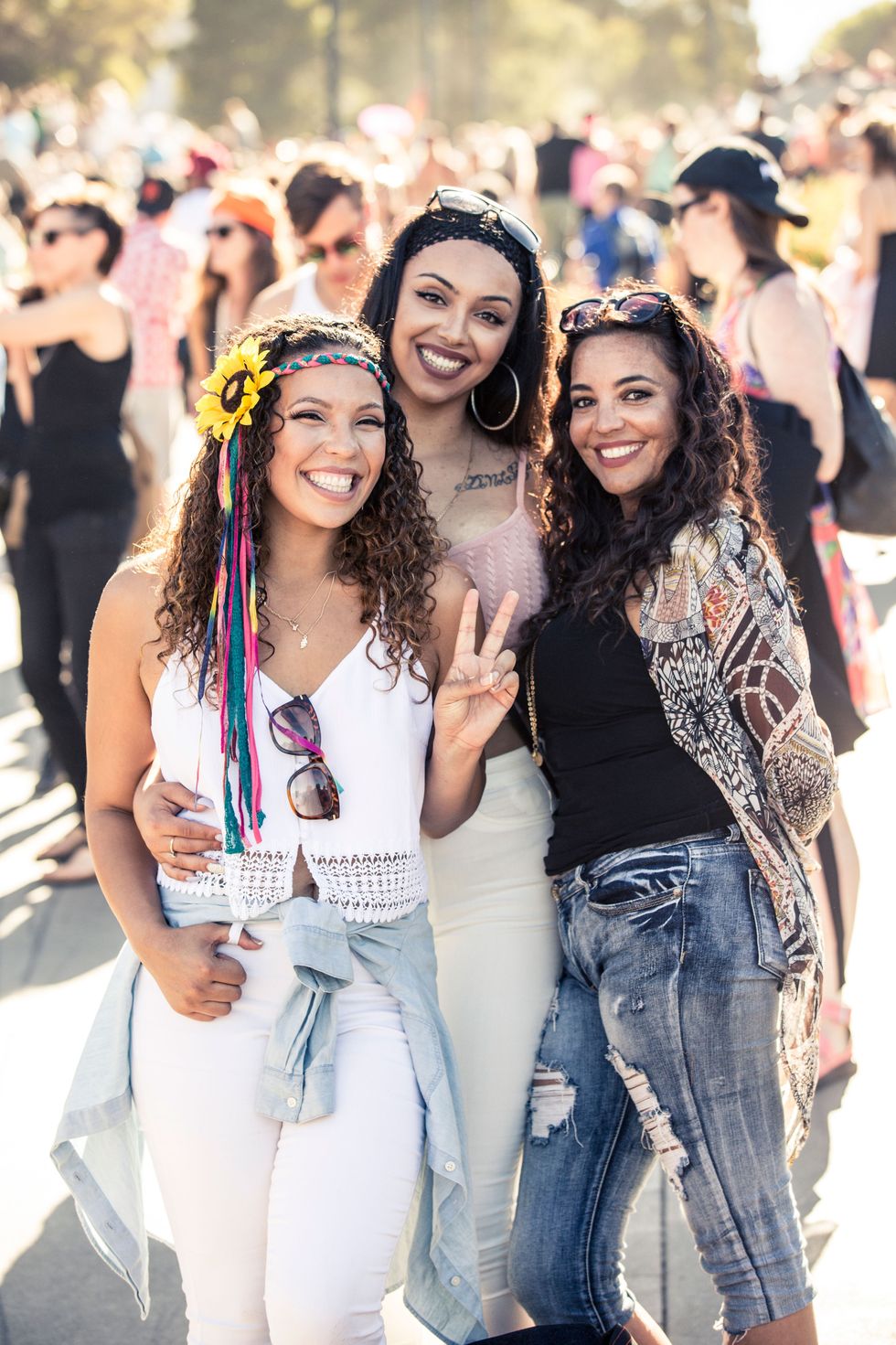 Princess Elohim, 22, and Myesha Chantal, 24 and a Leo rising, met in a world religions course at college. Their friend Simone on the right wanted us to know only that she is a born and bred San Francisco native. (Guru Khalsa) 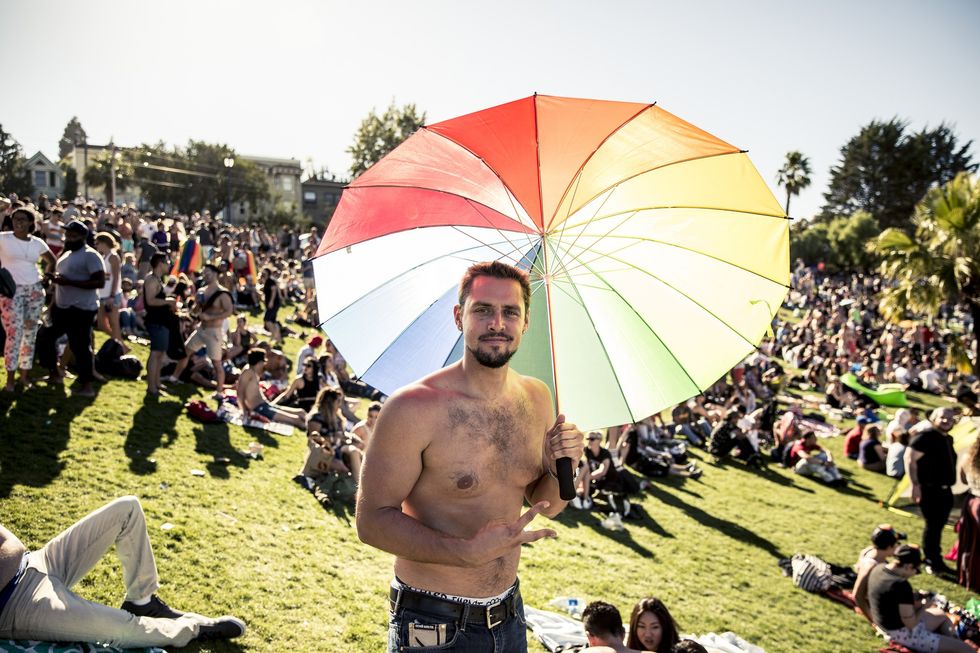 Pacey Williams, 30, is a San Jose native and a morning radio DJ on Star 101.3 in Sacramento. He says he usually falls asleep at night watching any episode from the Real Housewives franchise. (Guru Khalsa) 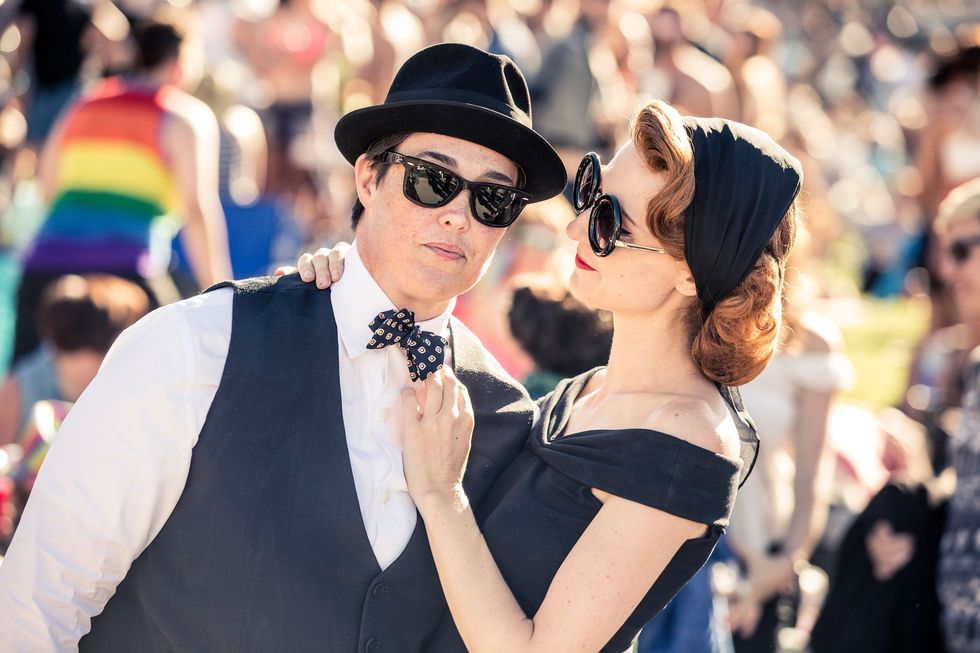 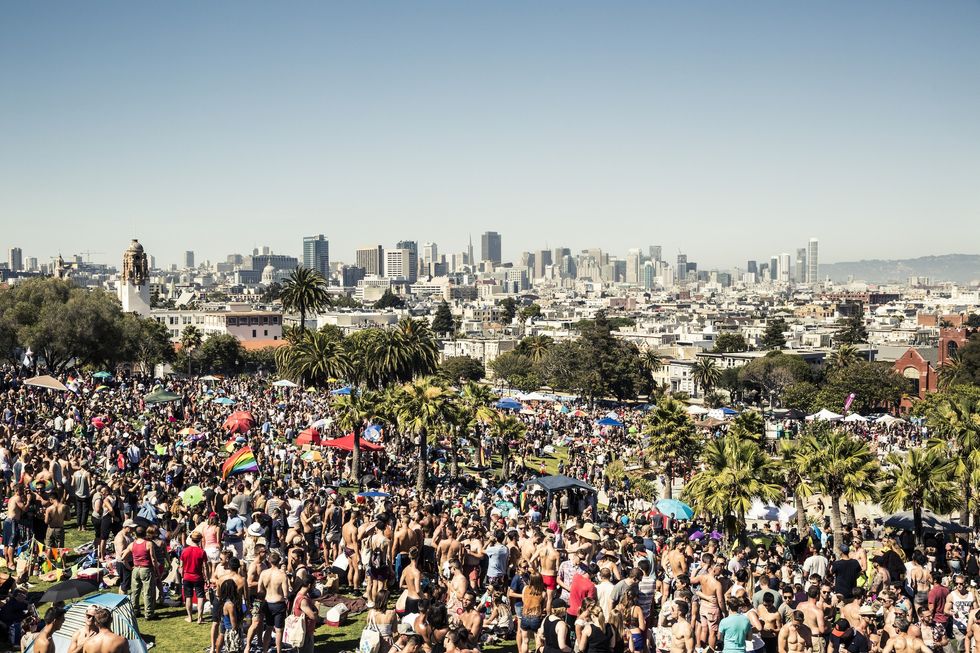 The park was filled with men and women from across the country celebrating Pride. (Guru Khalsa) 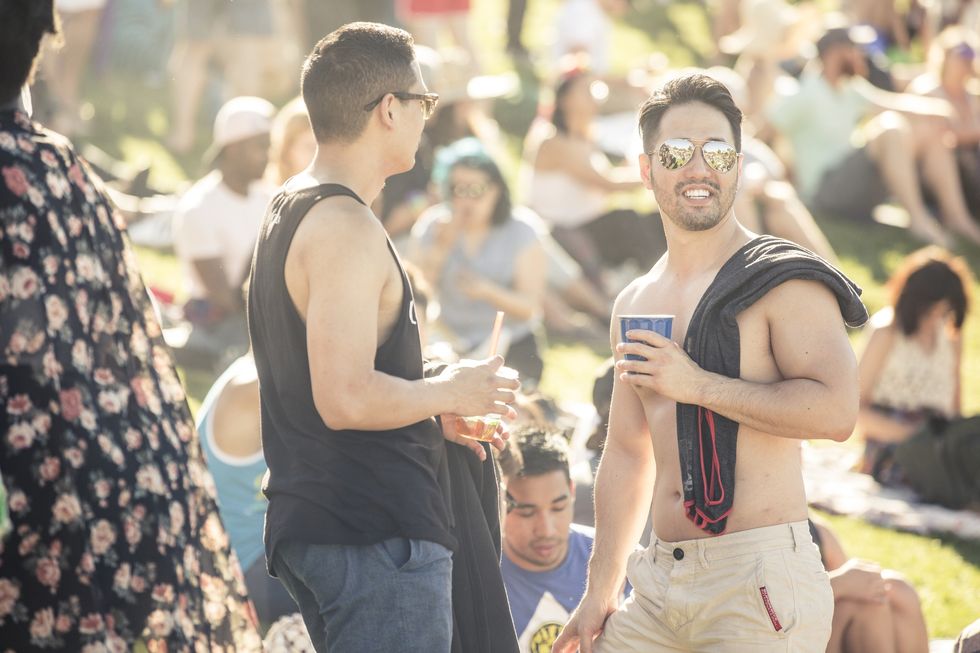 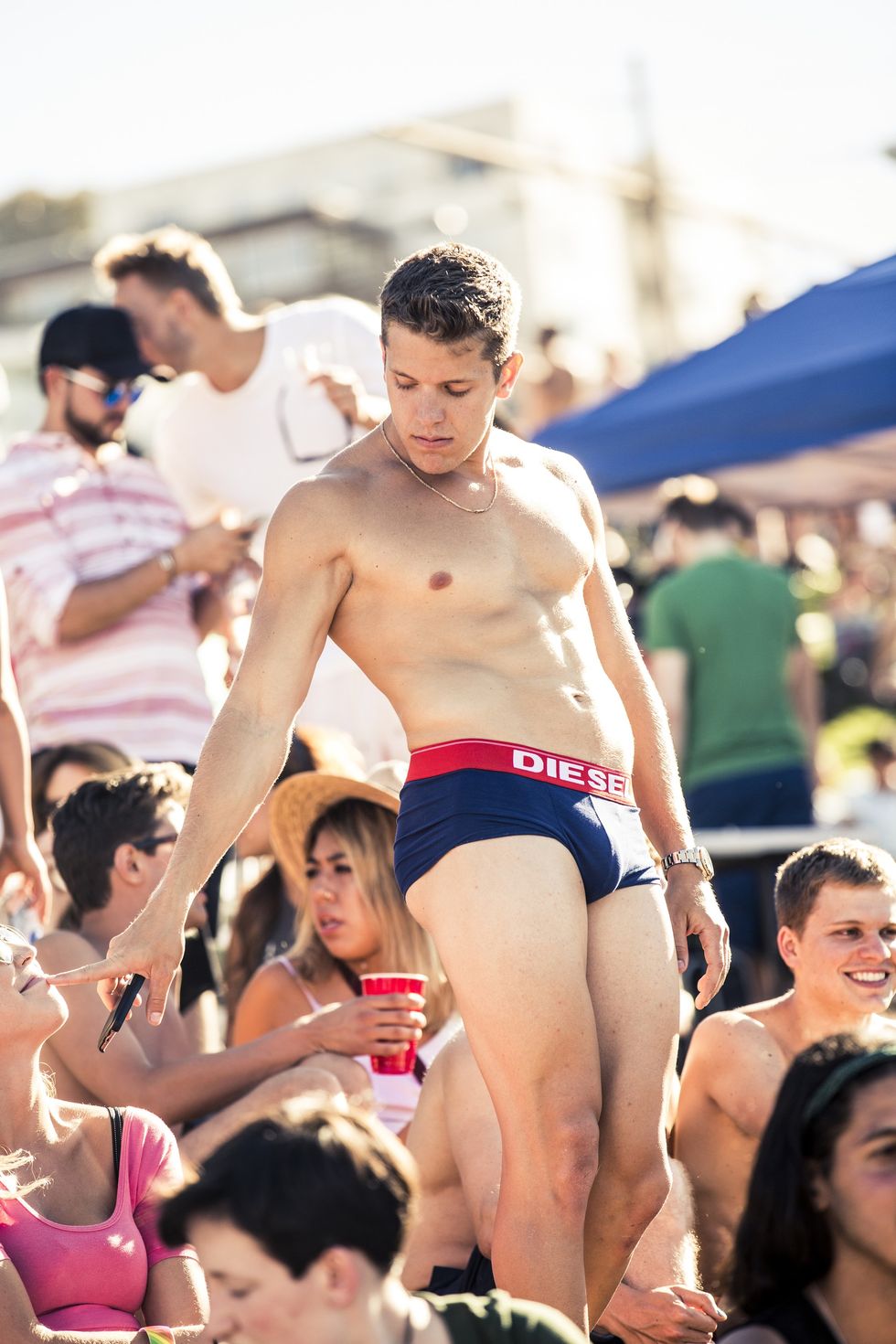 It was Thomas Prather's, 25, first time in San Francisco. "I didn't know how beautiful your city was!" The Gaithersburg, Maryland resident was meeting friends from college at Pride before heading off to Madrid the following Monday to begin an internship at an HIV prevention housing community. (Guru Khalsa) 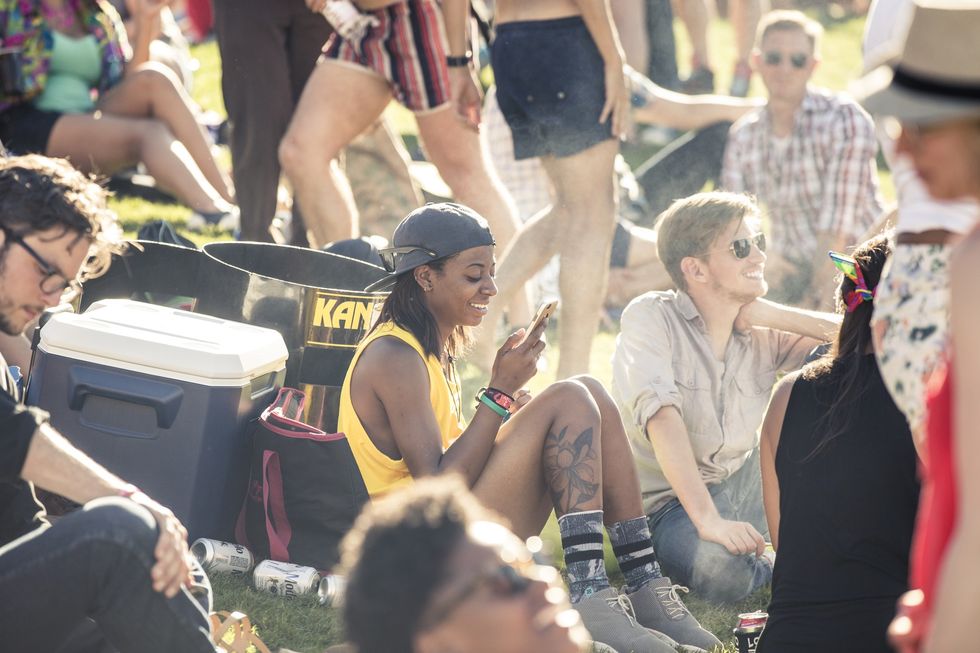 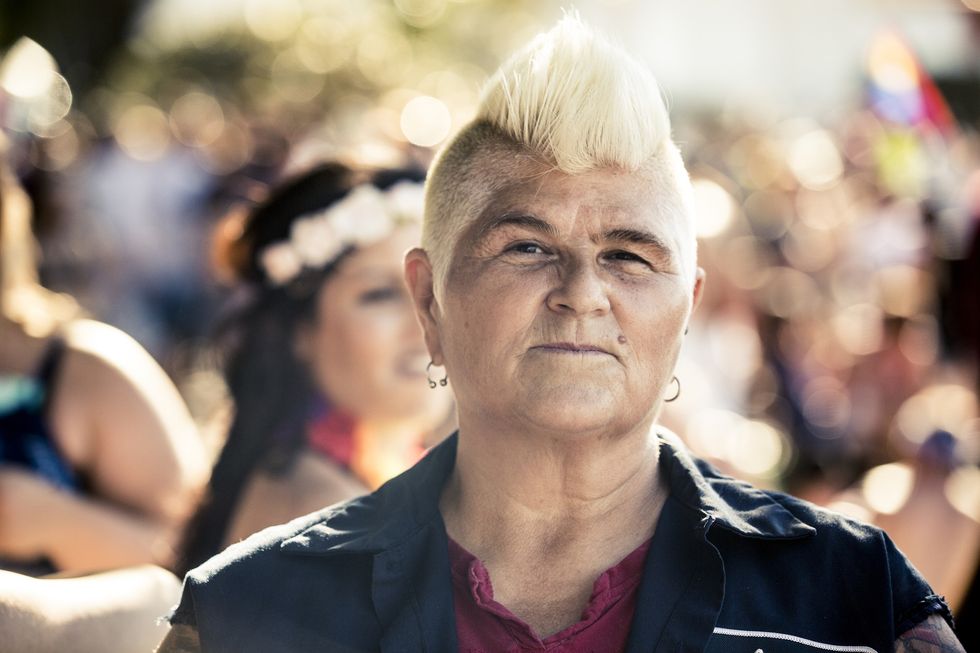 Helen Smithart, 53, has been coming to the Dyke March for at least 15 years all the way from Redding, California. She was staying with friends who introduced her to some homemade ceviche. (Guru Khalsa) 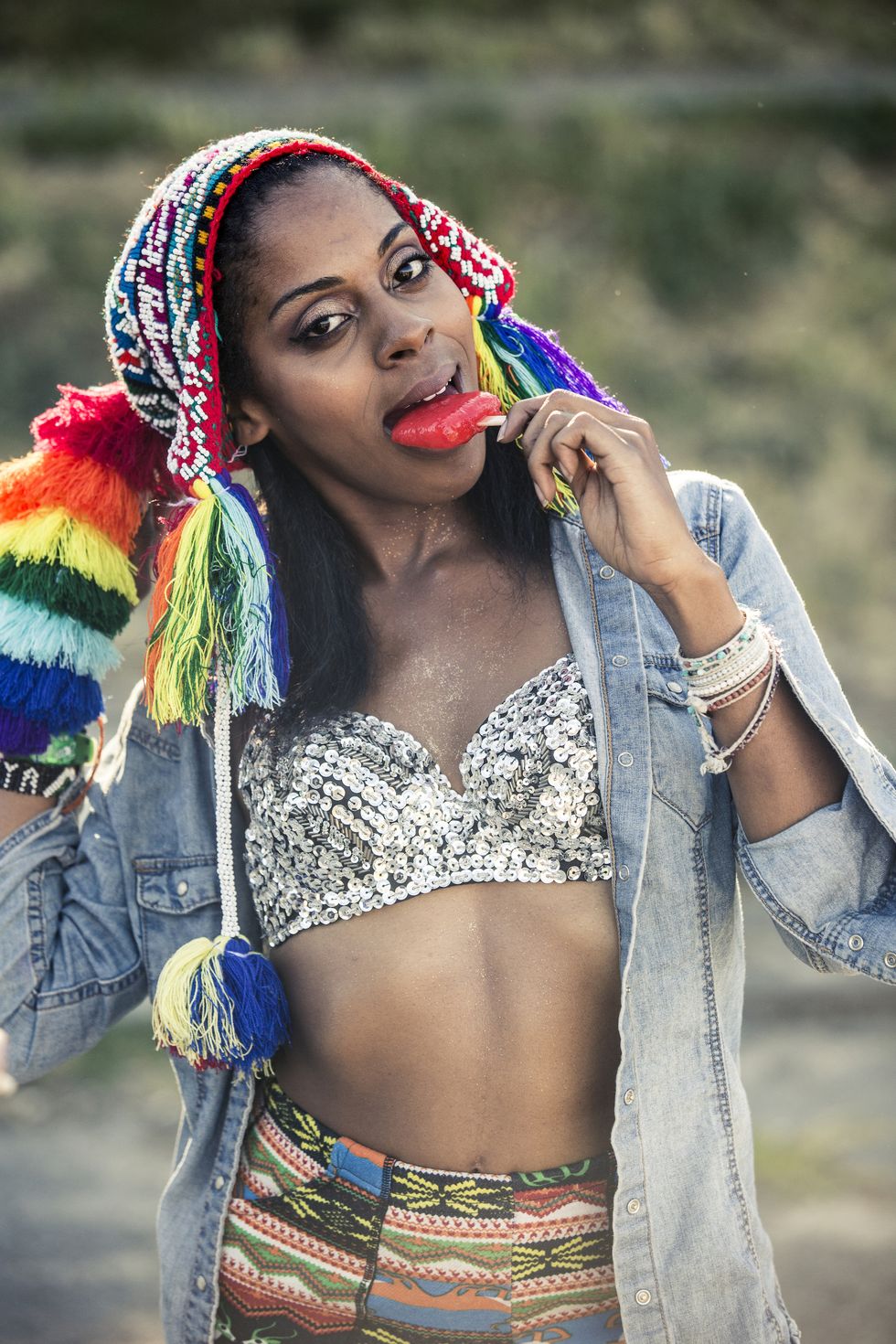 When Oakland native Tyra Ward, 29, isn't celebrating Pride, she works as a traveling nurse. She spent last year in Laos and Thailand. "I picked these pants and this hat up in Cusco!" (Guru Khalsa) 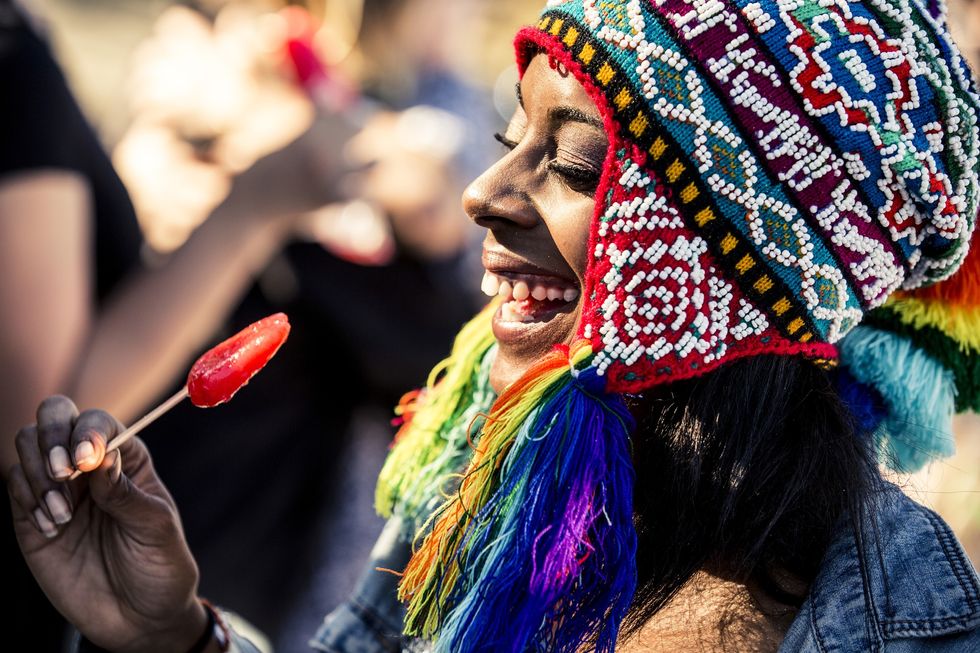 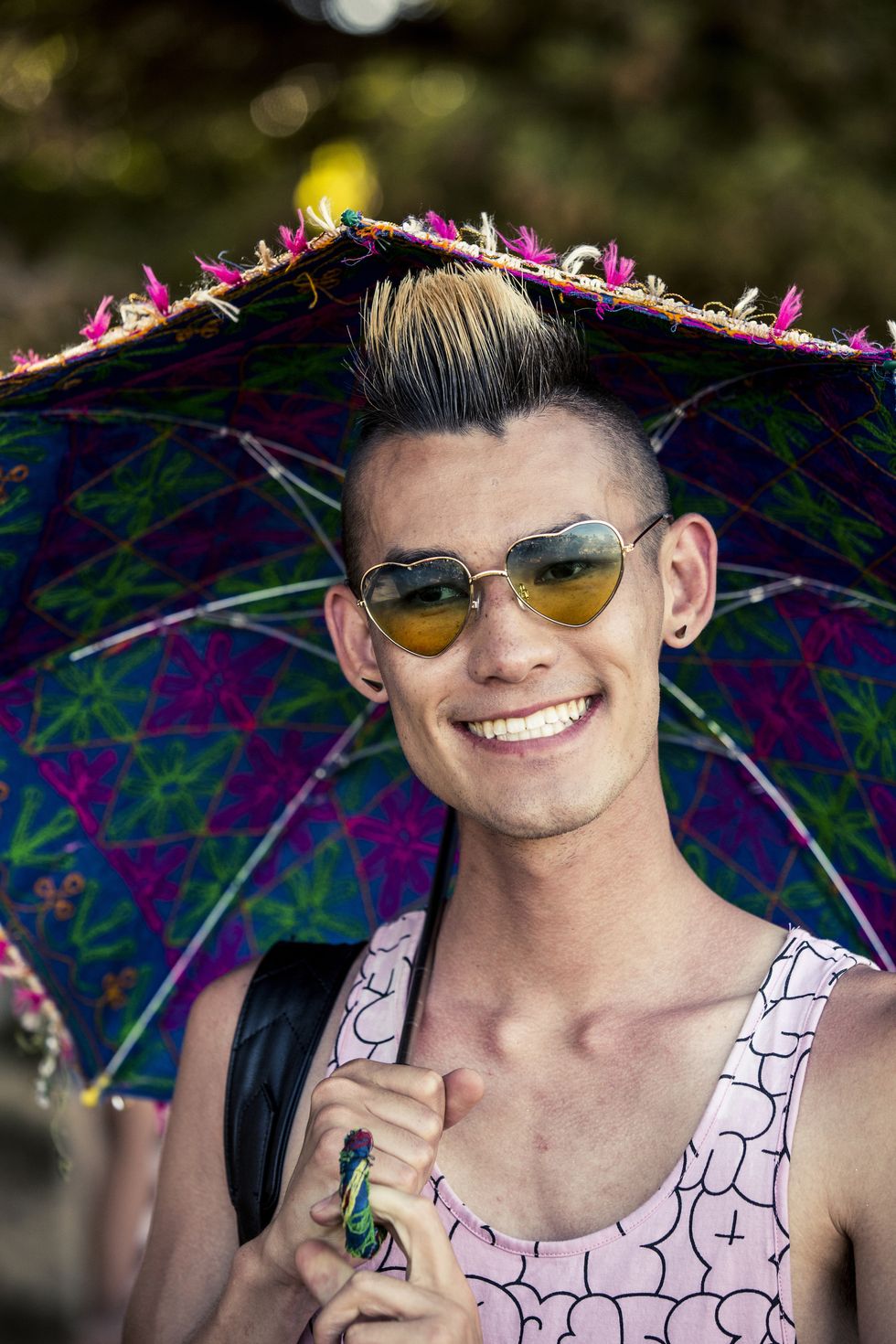 Originally from Dallas, parasol-toting Brad Jackson, 24, has been living in SF for the past five years. (Guru Khalsa) 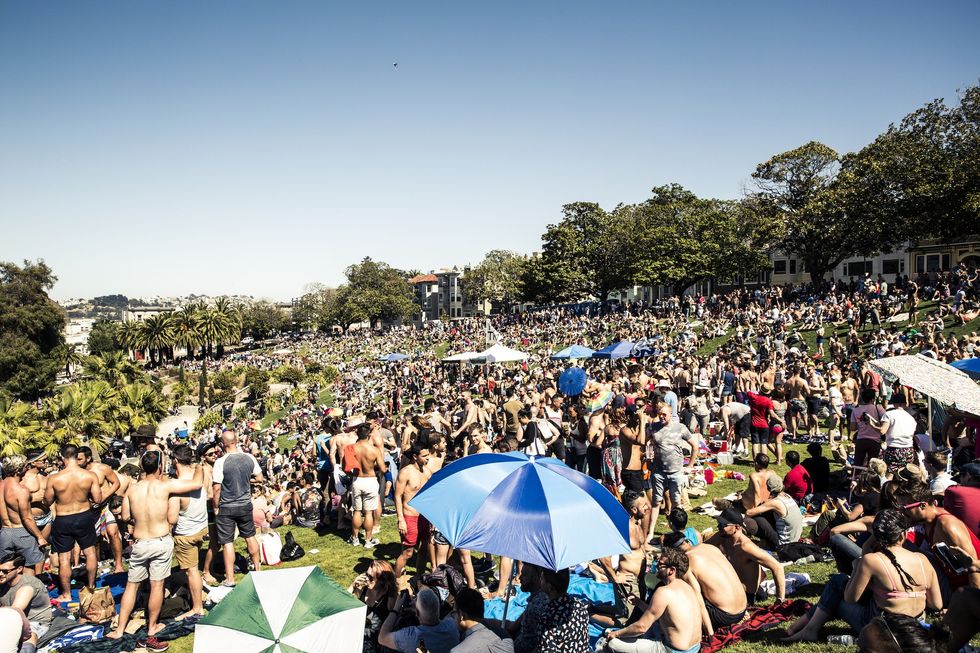 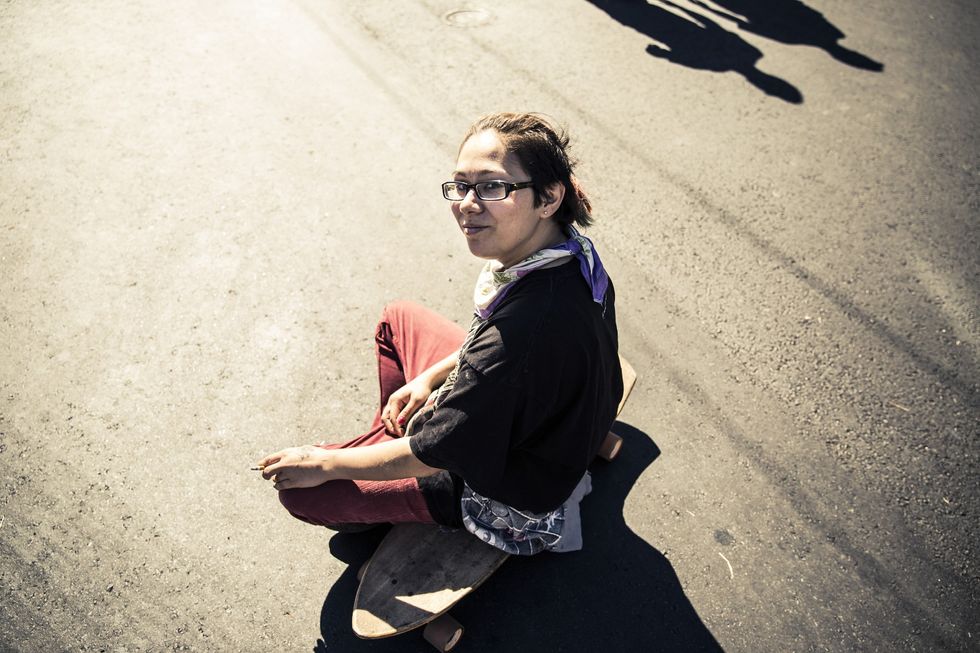 Skateboarder Creepy, 27, of Berkeley, waits for a friend in the middle of 18th and Dolores. It's her third year attending. (Guru Khalsa) 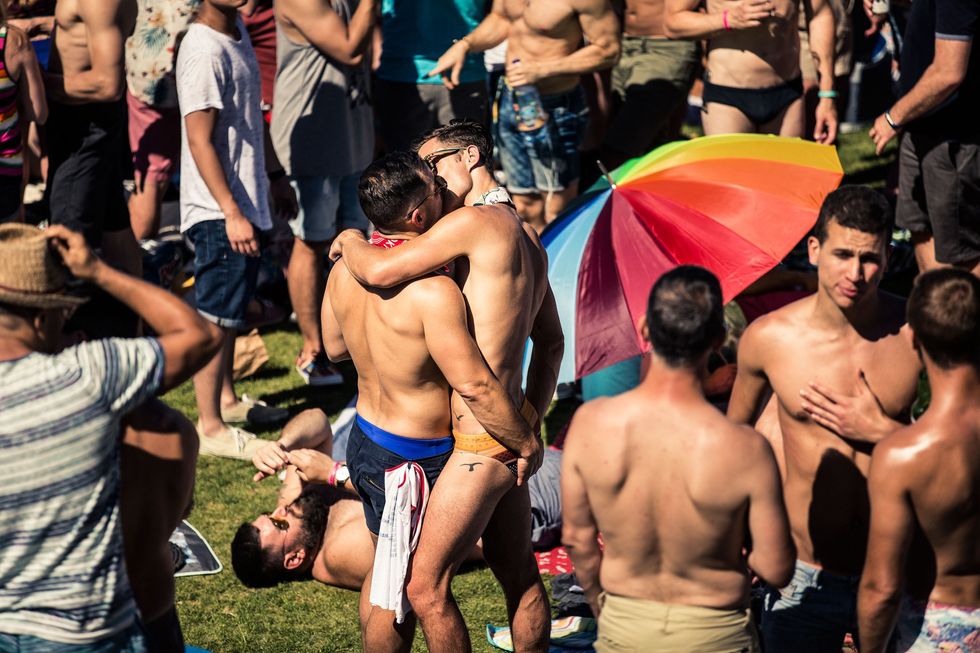 Thanks to local author and 7x7 contributor Karl Soehnlein, the hashtag #twomenkissing has been trending since the massacre at Orlando's Pulse nightclub. (Guru Khalsa) 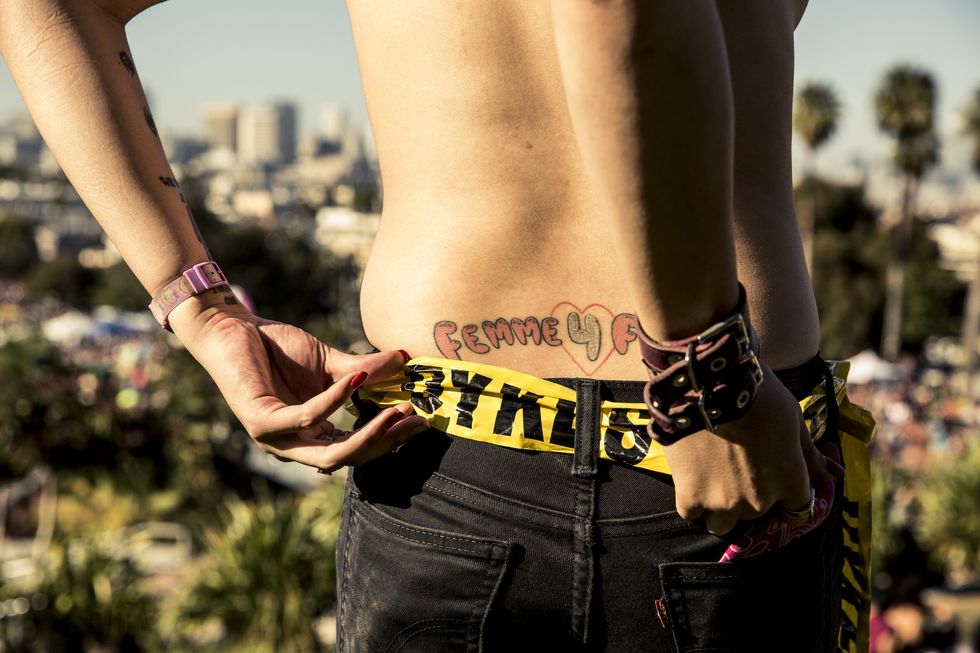 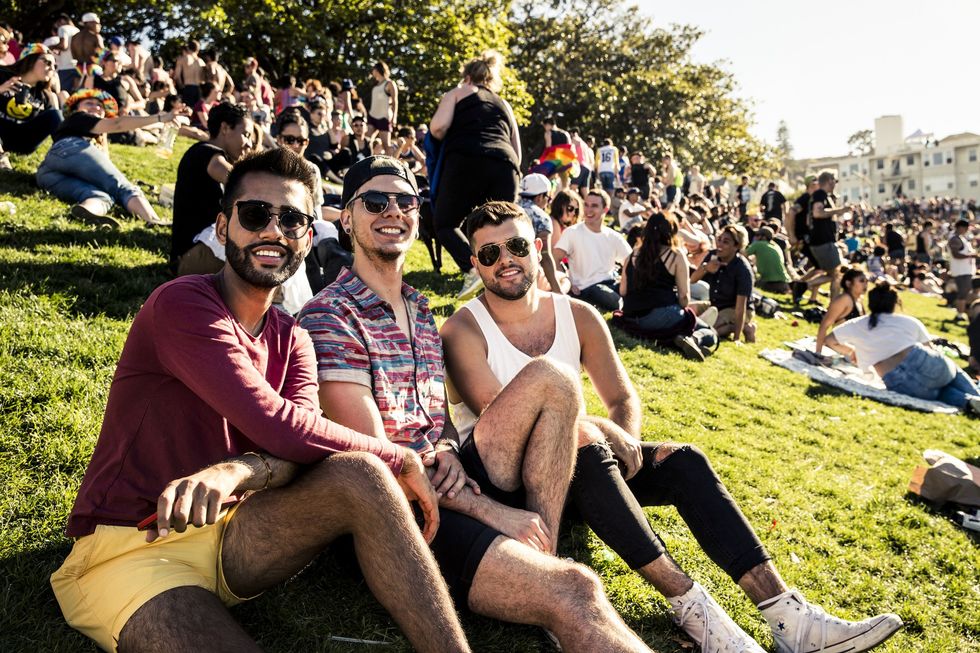 Saheb Dhillon, 21, Brian Reams, 21, and Joey Bruno, 22, arrived from SoCal to celebrate Pride in SF. "It's really the best one," said Bruno. While Bruno dug into a sushi boat in Japantown for lunch, Dhillon and Reams snuck off to Carl's Jr. "Hey, no shame! I needed a Double Western Bacon Cheeseburger," claimed Reams. (Guru Khalsa) 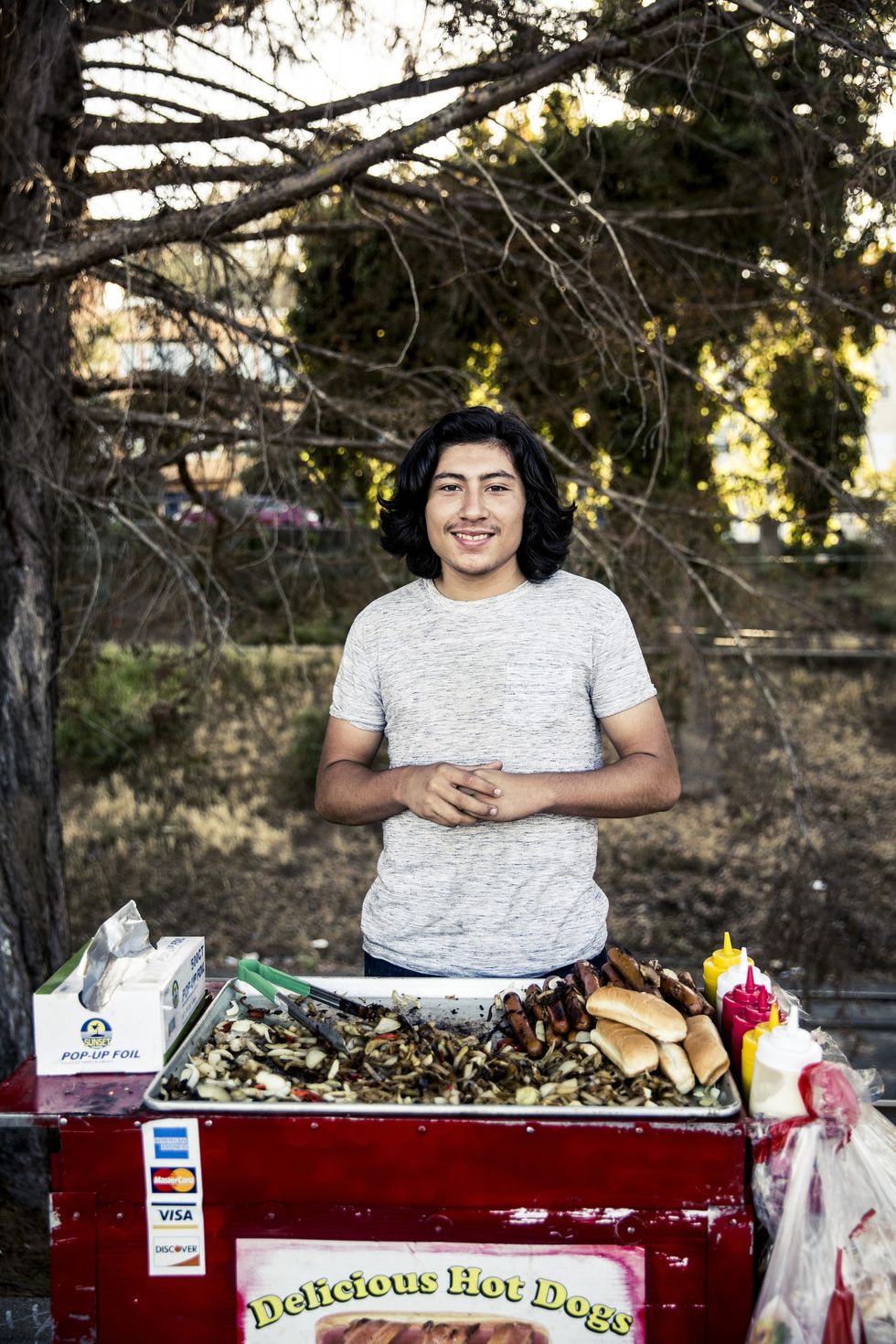 Joshua Quintos, 15, has been working one of the many bacon-wrapped hot dog carts at Pride for the past five years. He comes up from Riverside, California, every summer to work. (Guru Khalsa) 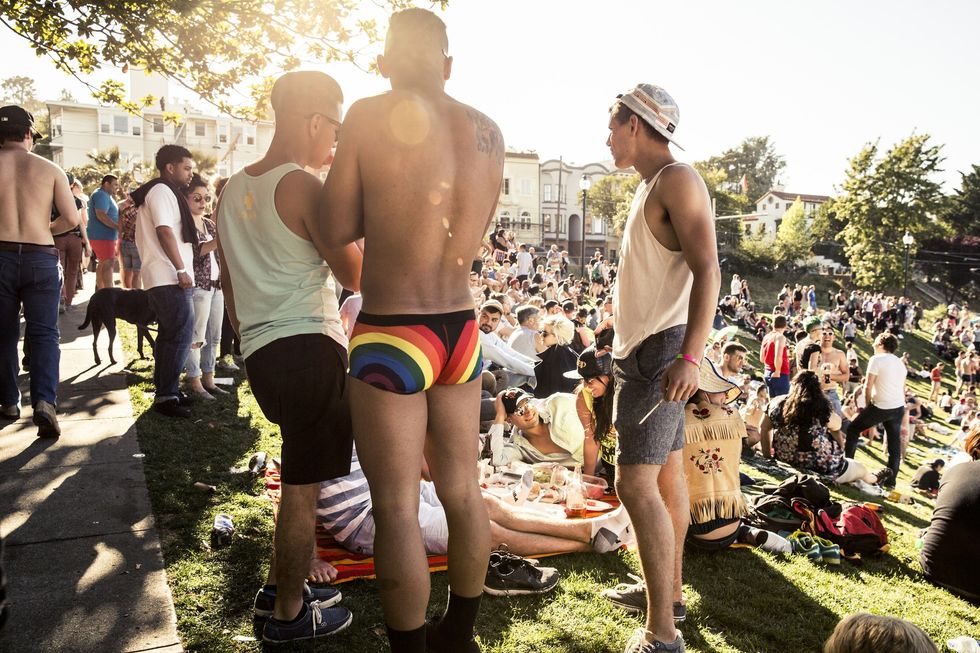 No surprise, but rainbows were everywhere, including patterned eyeshadow, pride flags worn as capes, and mens' tiny underwear. (Guru Khalsa) 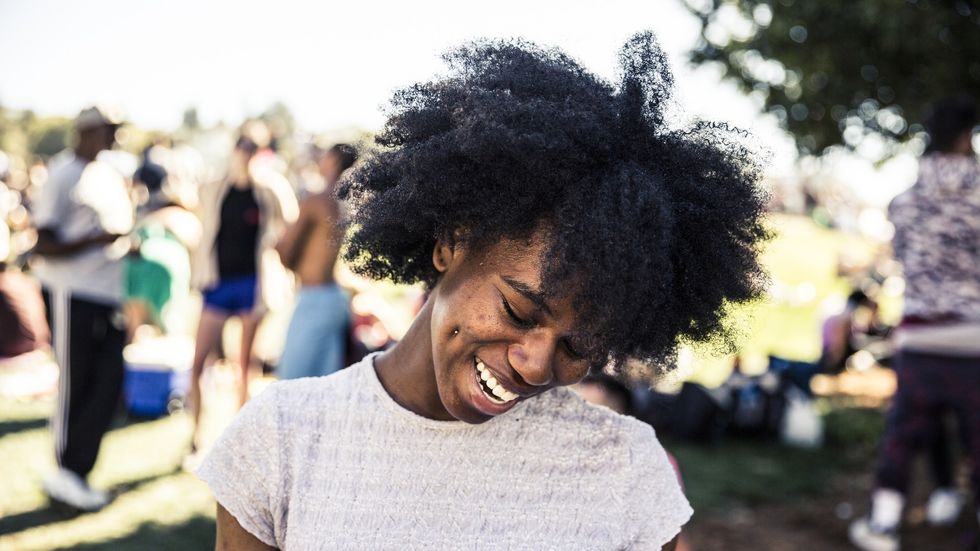 Originally from Stamford, Connecticut, 21-year-old Che Belcher has been living in SF for three years and attends the Dyke March every year. Between giggles she informs us she enjoyed katsu chicken from a Hawaiian restaurant for lunch. (Guru Khalsa) 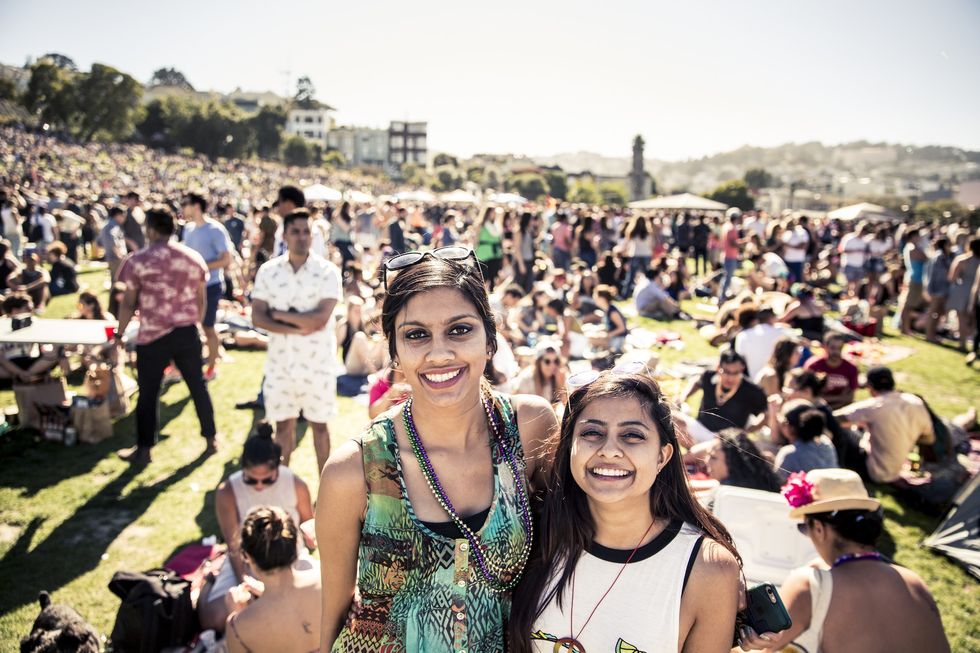 Friends since high school, Nisha Agarwal, 22, and Archana Bettadapur, 22, tucked into Sassy BLTs and mimosas at the Pink Elephant before heading over to their first time attending Saturday's party and march. (Guru Khalsa)