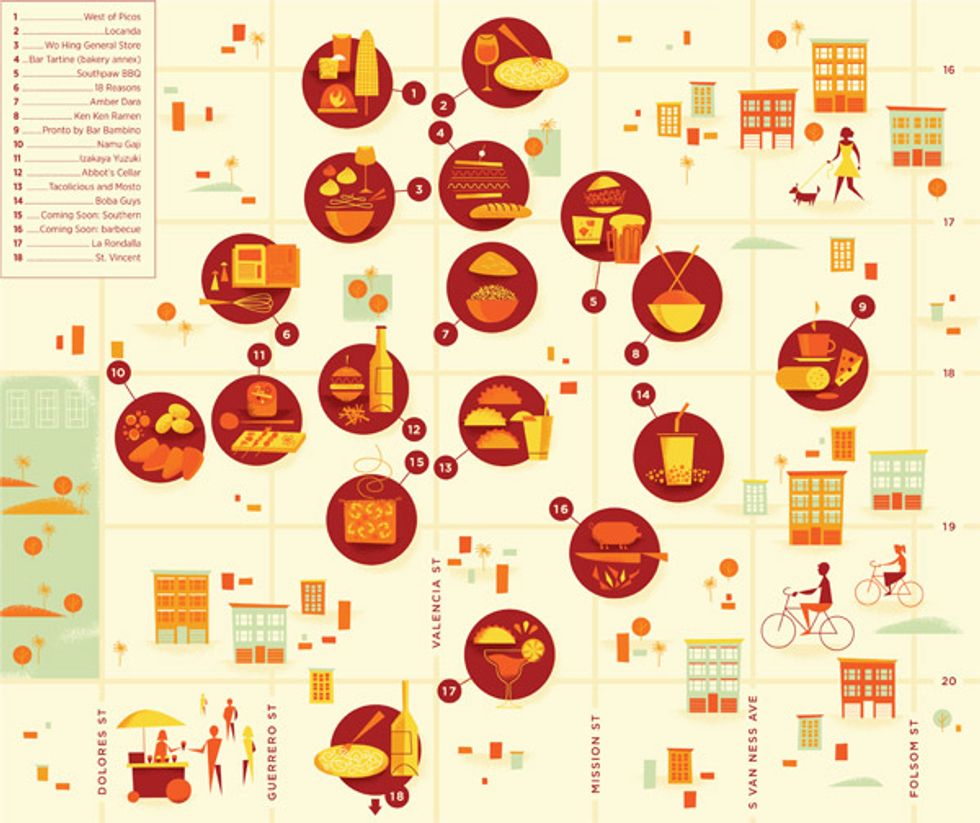 Just when you thought the Valencia Street corridor couldn’t stomach any more restaurants, it did—18 of them. Introducing your guide to how to eat well now and what to save room for later, because there’s even more cooking up this spring. [Ed's note: Click here to read Carolyn Alburger's addendum to this story, including a restaurant or two that we missed and a lot more that have been come into play since this story was published in the 7x7 February food issue.]

The MacNiven brothers of Woodhouse Fish Company have done a 180 from their two cozy East Coast-inspired seafood spots. Their new concept, a Southwestern-themed restaurant—taking over a sprawling space likely still redolent of the pungent Indian spices that used to be sold there—will serve things like crema-rolled grilled corn, maple-seared pumpkin, and meats roasted in a wood-fired oven. And yes, there will be a full bar—competition for neighbors Locanda and Wo Hing General Store. 548 Valencia St.

Chef Charles Phan may have returned to his original Slanted Door address, but now he’s focusing on Chinese street food rather than Cal-Vietnamese. The space has been refitted with molded steel banquettes for a modern vibe, and the bar is made from repurposed bowling-alley wood. Dishes are casual—don’t miss chewy Shanghai dumplings, stir-fried noodles, and humble jook—yet the inventive cocktails served in fancy vintage glasses are anything but. 584 Valencia St., 415-552-2510, wohinggeneralstore.com

Alabama gal Elizabeth Wells wrangled North Carolinian Edward Calhan and Memphis-born chef David King to partner with her on this casual barbecue spot. Though there isn’t a regionality to the menu, the pulled pork from their on-site smoker has global appeal—as does the whiskey-centric bar program and house-brewed beers. 2170 Mission St., 415-934-9300, southpawbbqsf.com

The second restaurant from Amber India owner Vijay Bist is taking over the huge space next to Luna Park that’s been vacant for 10 years. Look for natural wood, a mezzanine lounge, creative cocktails, and Californian spins on Indian dishes priced under $15. 680 Valencia St., amber-india.com

Though Pronto has had a kiosk in operation since the end of last year, come spring, the owners of Bar Bambino will open a full cafe inside the Oberlin Dance Collective theater. Performance or not, Pronto will be serving gourmet sandwiches, Sightglass coffee, and wine and beer on tap. Don’t miss the popcorn tossed with house-made caramel and peanuts. 3153 17th St., 415-701-8466, pronto.barbambino.com

In a little spot across from Dolores Park on the same corner as Bi-Rite Creamery, chef Dennis Lee will be serving a version of the Korean-Californian cuisine beloved by the regulars of Namu, his former Inner Richmond restaurant that closed at the end of the year. Look for grilled beef tongue, potato croquettes with kimchee and Korean chili aioli, and fried Brussels sprouts in brown butter and ponzu sauce with bonito flakes. 499 Dolores St.

Every restaurant once housed in this small corner building has failed—which is surprising considering the line at Tartine across the street. Now the cursed space has a brave new tenant in chef Takashi Saito, whose understated izakaya speaks fluent Japanese. The menu is full of meticulous creations, such as hand-molded lotus root dumplings in shrimp dashi, as well as more traditional items including miso-braised beef tendon. 598 Guerrero St., 415-556-9898, yuzukisf.com

The folks behind the popular beer-centric Monk’s Kettle are trying their hand at the finer side of dining. In a classic brick building that was once an auto shop, chef Adam Dulye, formerly of Euclid Hall in Denver, will fire off daily fixed-price menus. Look for hearty roasts pulled from a hearth oven, all designed to pair with a serious cadre of brews—some 150 bottles plus 22 on draft. 740 Valencia St., abbotscellar.com

The city’s been short on sit-down Mexican restaurants—till now. Enter the second location of Tacolicious, opened by Joe Hargrave (husband to 7x7 editor Sara Deseran). The space sports cheerful Mexican tile, a mural by SF Chronicle artist Paul Madonna, and a menu that extends far beyond tortillas. Next door, Mosto, a tequila and botanas (snacks)bar, has some 300 agave-based spirits and the aromas of pork and pineapple wafting from an al pastor spit. 741 Valencia St., 415-626-1344, tacolicioussf.com; mostosf.com

Timbuk2 colleagues Bin Chen and Andrew Chau have geeked out on making boba milk teas, cooking up tapioca balls in small batches and serving them with Chinese soy milk or Straus half-and-half. Find their pop-up shop at Ken Ken Ramen and other locations via Twitter (@BobaGuys). 3378 18th St., 415-967-2622, bobaguys.com

Big news: Preservation Hall, New Orleans’ famous 50-year-old jazz house, is opening its second location right here in SF. To go with it, there will be a cafe and a bar (not yet named at press time) with a large outdoor seating area, as well as a dinner-only restaurant. Owned by Jack Knowles of Oakland’s À Côté, expect a menu catering to a California mind-set, all infused with the flavors of NOLA. We like one of their working names: Chapel. 777 Valencia St.

Chef Scott Youkilis and Eric Rubin of 19th Street’s popular Hog & Rocks already have a slam dunk on their hands, so their next venture—a counter-service, picnic-tabled barbecue spot—should be a shoo-in. (They just need a name.) The restaurant will be powered by a 7,000-pound, wood-fired J&R smoker from Texas. Celeb bartender Scott Beattie’s knack for crafting drinks out of barrel spirits—aged tequilas, whiskeys, and bourbons—should result in a match made in heaven. 3416 19th St.

Dark and draped in Christmas lights year-round, this iconic, Mexican restaurant and bar was never about the food. It was loved for its kitchy, hole-in-the-wallness. Though its been boarded up for five years, La Rondalla is now being resurrected thanks to the founders’ granddaughters who are redesigning and reopening the restaurant with an eye toward change. We just hope the mariachi band returns. 901 Valencia St.

David Lynch, the lauded wine director from Cotogna and Quince, has taken over this former wine bar and is updating it with a saintly concept. The wine list has 100 bottles under $100 and half-price half- bottles of every wine. All are meant to be paired with Italian osteria-style eats, made shareable by Bar Tartine vet Chris Kronner. Expect a total interior redesign of the narrow space before it opens. 1270 Valencia St., 415-285-1200

But that's not all...stay tuned for even more news on recent restaurants and bars moving to the booming Valencia Corridor, coming later today.