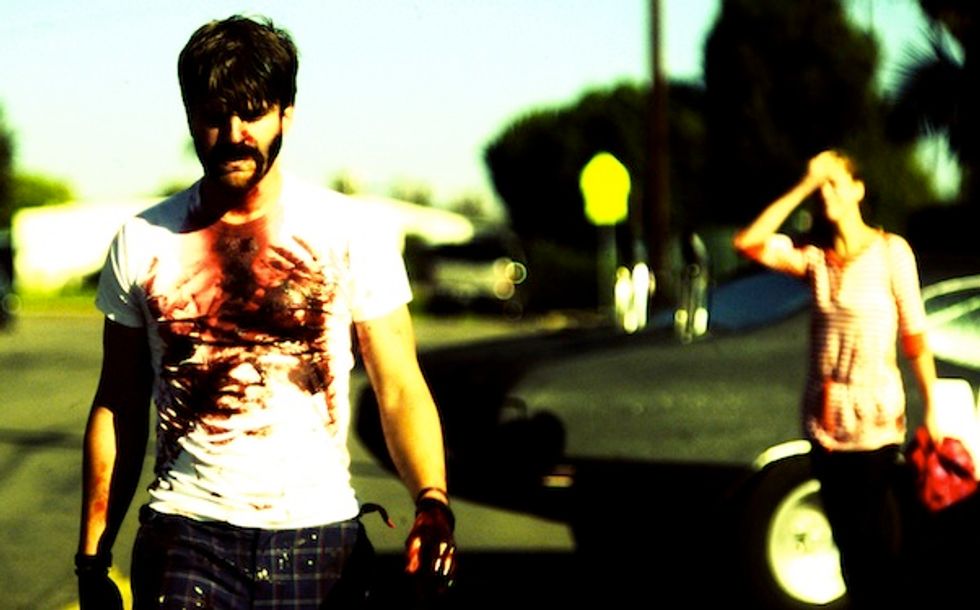 Can you feel the electricity in the air, the faint buzz of anticipation gradually building to a deafening roar? That's right – the world is just a week away from the arrival of Happy Madison's Bucky Larson: Born to Be a Star, directed by Tom Brady (no, not that one) and produced by Adam Sandler, who charitably prolongs the careers of former SNL co-stars with his endless reserve of fart jokes. Until then, try to contain your excitement with any of these fine offerings, now showing at an indie theater near you.

1. Bellflower
Where: Roxie Theater, 3117 16th St., 415-863-1087
When: All Week
Why: One of the year's most striking originals, Bellflower follows the highs, lows and bitter aftermath of a turbulent romance, mixing emotionally naked drama with an apocalyptic nightmare that recalls Shakespeare's grimmest tragedies. For anyone who's ever entertained the darkest of post-breakup fantasies, as well as fans of Mad Max-style muscle cars equipped with massive flamethrowers, it is the must-see event of the summer.

2. Higher Ground
Where: Embarcadero Center Cinema, 1 Embarcadero Ctr., 415-352-0835
When: All Week
Why: Adapted from screenwriter Carolyn Briggs' 2002 memoir This Dark World, Vera Farmiga's directorial debut is uncompromising. The story of a Christian fundamentalist undergoing a personal awakening that threatens her marriage and complicates her relationship with God, Ground is neither condescending nor sensationalized, a keenly observed portrait of a life mired in uncertainty and disillusionment.

3. Notorious
Where:Castro Theatre, 429 Castro St., 415-621-6120
When: Sept. 6
Why: The Castro's weeklong tribute to Cary Grant concludes with Alfred Hitchcock's 1946 romantic espionage thriller, a benchmark in the director's illustrious career not only for its innovative camerawork and unparalleled visual style, but also for Grant and co-star Ingrid Bergman's on-screen kiss, once the longest in the history of movies.

4. Senna
Where: Embarcadero Center Cinema, 1 Embarcadero Ctr., 415-352-0835
When: All Week
Why:  Brazilian Formula One racer Ayrton Senna's remarkable story – charting his achievements on and off the track and the mythical status he has attained – is the subject of Asif Kapadia’s Senna, a Sundance winner that spans its subject’s years as an F1 driver, from his opening season in 1984 to his death a decade later. More than a film for F1 fanatics, the documentary recounts a remarkable story in boldly unconventional fashion, eschewing standard documentary technique for a more cinematic approach that makes dramatic use of previously unreleased F1 footage.

5. The Hedgehog
Where: Clay Theatre, 2261 Fillmore St., 415-346-1124
When: All Week
Why: Inspired by Muriel Barbery's bestselling The Elegance of the Hedgehog, Mona Achache's feature debut tells the story of a young girl determined to end her life on her 12th birthday. When she discovers a secret library, and improbably befriends its curmudgeonly keeper, Paloma (Garance Le Guillermic, of I Hate My Best Friends' Kids) begins to understand that there are allies to be found beneath the prickliest of exteriors, making own coming of age a much less pessimistic prospect.

6. Sholem Aleichem: Laughing in the Darkness
Where:Opera Plaza Cinema, 601 Van Ness Ave., 415-771-0183
When: All Week
Why: Darknesspresents a illuminating portrait of the Ukrainian author and playwright whose writings helped transform Yiddish into a literary language and, in the process, introduced the world to beloved characters including Tevye from Fiddler on the Roof. Here, director Joseph Dorman (TV's Ten Days That Unexpectedly Changed America) combines excerpts from Aleichem’s work with interviews, archival photographs and documentary footage to chronicle the dramatic evolution of Yiddish culture.

7. The Whistleblower
Where: Opera Plaza Cinema, 601 Van Ness Ave., 415-771-0183
When: All Week
Why: The world of sex trafficking serves as the backdrop for first-timer Larysa Kondracki’s thriller, featuring a stellar cast led by Vanessa Redgrave, David Strathairn and Rachel Weisz. Inspired by the real-life story of Kathryn Bolkovac, a Nebraska police officer who uncovered an international scandal during a peacekeeping stint in Sarajevo, Whistleblower is a sturdy police procedural that strips back the curtain on the underground sex trade.