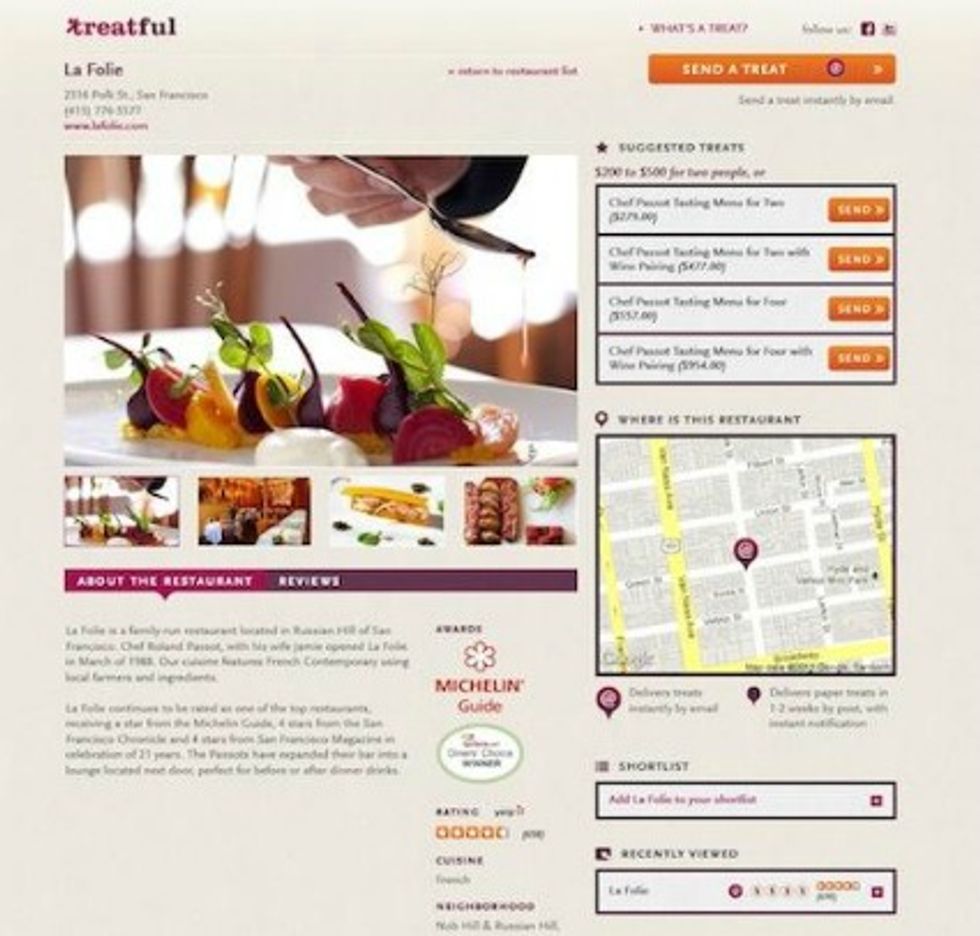 According to the National Retail Federation (NRF), we Americans are in the process of spending around $28 billion on gift cards this holiday season, with 80 percent of us choosing to buy at least one, spending an average of $43.23 per card.

There’s nothing new about gift cards, of course, but what is new in 2011 is the effort by a number of local startups to attack the traditional, impersonal sort of card with a new, much more personalized online approach.

Three small companies poised to disrupt the traditional gift card industry in three separate strategies are Giftly, Giftiki, and Wantful – all of which I’ve profiled earlier this year.

Treatful is focused on bringing online personalized gift certificates to acclaimed restaurants, including Aziza, Flour + Water, La Folie, Quince and Saison in the city, plus some 400 elsewhere around the country.

The pair came up with the idea for Treatful while still in school. On their spring break in 2010, they interviewed local business owners, researchng ways to help them compete against the likes of Groupon, which had recently launched its discount model – a model the students found was deeply disliked by most local business people.


“We quickly figured out that Groupon was proving to be detrimental to local businesses,” says Looney. “What we heard from them was they wanted a gift card solution that involved no upfront fee, no annual fee, but a revenue share model that would help them find new customers.”

Looney and Kim zeroed in on restaurants, which all had signs saying “Inquire About Gift Cards,” but were stuck with sub-optimal processes like requiring customers to fill out lengthy PDFs and faxing them back to the restaurant afterward.

To test out their theory that they had a better way, the pair launched a beta site last holiday season with three restaurant partners including and Maverick in the Mission, and Baumé in Palo Alto.

That was successful enough that they’ve been quietly adding restaurants ever since.  It’s very easy to use the site, which does not require any registration. You just scan the restaurants and purchase a gift certificate that is quite elegant in design.

Within a minute or so it's on its way to your recipient.

The restaurant owners seem to love Treatful, which has brought their gift card operations into the 21st Century, eliminated the time-consuming PDF/fax model, and is proving to be a cost-effective way of acquiring new customers.

They also are able to charge their set rates for meals, avoiding the painful discounts imposed by Groupon’s “race to the bottom,” as Kim puts it.

“When restaurant owners heard we were charging no upfront fee or monthly/annual fees,” he added, “their reaction was, ‘You’re the good guys. You’re the anti-Groupon company.’’”

Treatful charges a commission to the restaurants for each certificate purchased, but nothing to consumers, whose (say) $75 gift costs them $75.

Treatful didn’t really emerge publicly from what was a kind of a slow, soft-launch beta until last month, when it had signed up around 250 restaurants, but with the rapid addition of 150 more since then, certain patterns are already starting to become apparent in their user data.

“One thing that did surprise us is that once people find Treatful – either from a restaurant or our website – they often start to use it more and more in other cities,” says Kim.

With listings in L.A., New York and Chicago, among others, the company says somewhere around 40 percent of the gifts it is logging are “non-local.”

Another trend is heavy corporate usage, which accounts for roughly a quarter of all gifts issued, the company says. Some of the heaviest gifters turn out to be chefs, who frequently issue gift cards to their restaurants to other restaurant owners and chefs.

The Treatful team of nine is based on Townsend Street, across from the Caltrain station and has raised a little over $1 million in funding to date.